ISKCON at Aids conference in Bangalalore 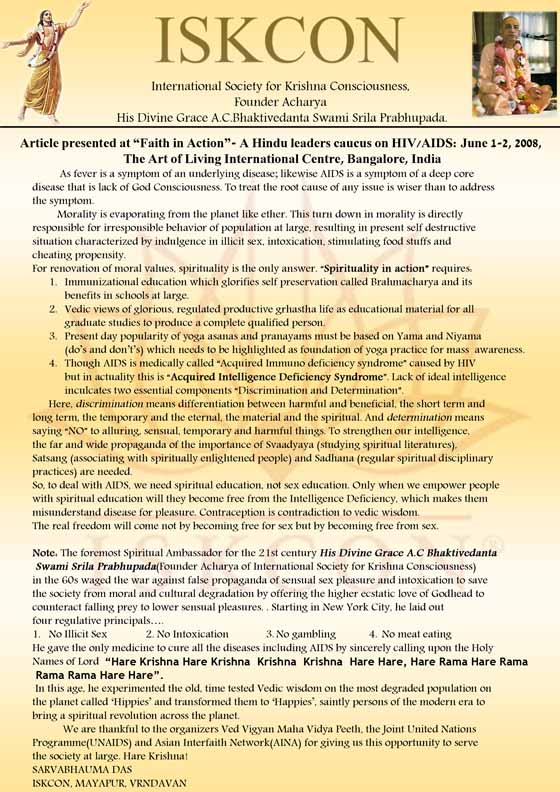 On the inspiration of HH Bhakti Purusottama Maharaja, Sarvabhauma Prabhu and four devotees arrived at the Art of Living Centre in Bangalore last month. ISKCON had been invited to participate in a two days conference, “Faith in Action”- A Hindu Leaders caucus on HIV/AIDS, organized by UNAIDS and others. They were warmly received by the organizers, who upon seeing the devotees, exclaimed, “Oh! ISKCON sadhus have arrived!” and escorted them. They had invited Sadhus from all over India, as well as some delegates from abroad.

The UNAIDS representative admitted that without the help of the religious leaders who have a deep influence on society, we will be unable to fight aids or create mass awareness for its control and to remove the stigma attached to HIV-positive persons. Surprisingly one delegate from abroad, giving the figures from South Africa and other African countries, said it was found that 150 priests and ministers themselves admitted to be HIV-positive.

Our devotees were well prepared professionally with a first-class leaflet that they distributed among the delegates, sadhus, and audience. As there were many speakers, they gave Sarvabhauma Prabhu only ten minutes to speak. But in that small time, he recieved applause at least seven or eight times.

He began by asking all to please repeat a prayer to invoke auspiciousness recited by a five-year old child who recieved the direct audience of the Lord Vishnu. We hope to get His mercy, not only to combat AIDS, but to become more moral and devoted. “Om namo bhagavate vasudevaya,” was repeated by all. He told now you see that everyone who came here to speak has prayed alone, but we now have jointly prayed together, so this is practically way of congregational chanting to counteract the ill effects of the Age of Kali.

He continued that it is surprising to see sadhus required to help against AIDS, where usually doctors should have been called. It means that sadhus are more powerful. Sometimes people say to the sadhus, giving himself as the example, that you are all plump and fatty by living lavishly on ladhus supplied by society. But Sarvabhauma Prabhu pointed out that the army is highly paid and fed for years, but only when there is a war, they’re facing the bullets, while we are peacefully sleeping in our houses. Similarly, now there is a moral degradation, so sadhus are sacrificing their lives to bring higher values back to the society. That is why we all sadhus are all here.

Jagannatha Prabhu noticed that as soon as Sarvabhauma started refering to the circulated leaflet, everyone pulled it out from their files and began seriously following his speech. He pointed out that mostly we are treating the symptoms, but not the real disease, that AIDS is a symptom of a deep underlying disease that is lack of God Consciousness. This leads to a lack of morality which is actually responsible for the present behaviour of society at large leading to all these problems. Thus Spirituality is the real solution to restore moral values.

He went through the various points enumerated in the leaflet, and the whole audience reacted when he said that now there is no Yoga, there is only Bhoga as there are no yam and niyam, does and don’ts. Then all applauded when told that AIDS is not an acquired-immunity deficiency, but acquired-inteligence deficiency.

At the end Sarvabhama explained that we are speaking practically as we have seen that His Divine Grace A. C. Bhaktivedanta Swami Prabhupada successfully combated loose sexual mores and intoxication in western society by offering the higher taste of chanting Hare Krishna.

The next day one minister commented that people are listening to you sadhus, so please help us to solve the problem. After he left Sarvabhauma prabhu sent a note to Agnivesh Swami who read out to the audience, “People are listening to us, but the real problems is you politicians are not listening.”

At the concluding session, Sarvabhauma asked the UN representative, “If you find the treatment for the HIV, then…? What? You’ll go back to doing the same old habits and call us again when the problem comes. We are with you for bringing moral values, treating the disease and not the symtoms. Hare Krishna.”

Ravi Shankar himself came and congratulated him that you spoke very powerfully. And Sarvabhauma replied, “Everyone is sleeping, what can I do?” Even Agnivesh Maharaja told that we need person like you to fight against immorality, you really blasted them for their Bhoga Yoga. Jankinatha Prabhu commented as we left, that now everyone realizes that ISKCON is very much alive and a lion.

Archbishop of Canterbury receives Bhagavad Gita As It Is