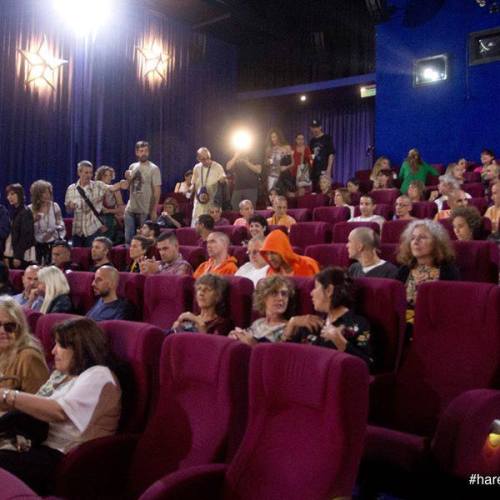 Documentary about a revolutionary spiritual master!
Avant Premiére, April 3, 2018
Buenos Aires, Village Recoleta
Have you ever encountered a man you thought was supernatural? Were you ever encouraged that perhaps the world had a promise of a spiritual future? Those who attended the incredible gala last night of the movie, “Hare Krishna. The Mantra, the Movement, and the Swami Who Started it All” left feeling inspired and hopeful.“ This film by John Griesser portrays the arrival of Srila Prabhupada, a saintly sage, in America. This spiritual personality, despite so many obstacles, revolutionized the hearts of millions of people and developed the Hare Krishna movement in these latitudes.
Participants filled the room: authorities of different faiths, government members, journalists and devotees. We all received superb attention from the organizers including vegetarian snacks, music, kirtan, and the chanting of mantras. There was time for questions and answers after the film while savoring traditional Indian dishes. Free distribution of a biography of this revolutionary saint, the subject of the documentary, was available for those interested in further understanding.. Every detail of the gala was involved in the message and atmosphere that Srila Prabhupada infused into the movement: humility, tolerance, joy, and vocation of service … These were two hours of a time without time, or even better, of a sacred time!