In the last few months several matajis have approached me for help regarding abusive husbands. Today I received this letter from a male devotee:

I am writing to you with some concerns. Over the past few years, I’ve seen much abuse towards women, especially in the past year. Why do we treat women like they are second class citizens? I’ve seen many women in ISKCON hurt and mistreated. I am requesting that at your next yearly GBC meeting in Mayapura, the GBC council will pass a resolution or law promoting proper treatment of women in ISKCON. I hope the resolution would also address some of the past abuses and mistakes that have occured toward women. Let’s take care of the women and stop the injustices.

Thank you for hearing my concerns.

We do have such resolutions, but clearly they are not known to all, and then some who do know of them consider them to be “not vedic”. In my travels I have noticed much concern for this issue from many angles. In west Afrca the government has posted many signboards promoting domestic non-violence. Today I heard His Divine Grace Srila Prabhupada saying “ahimsa param dharma”. Ahimsa means more than being vegetarian. While walking through the Metro station in Singapore I noticed these signs at the “BODY SHOP”. 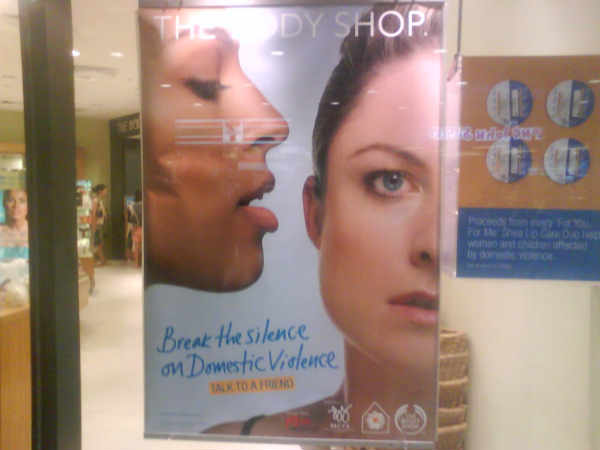 The GBC does have a committee that hopes to help victims and to teach devotees to always act on a spiritual level. Anyone who needs help can contact Radha dasi at

This has been announced also here: http://www.dandavats.com/?p=2560