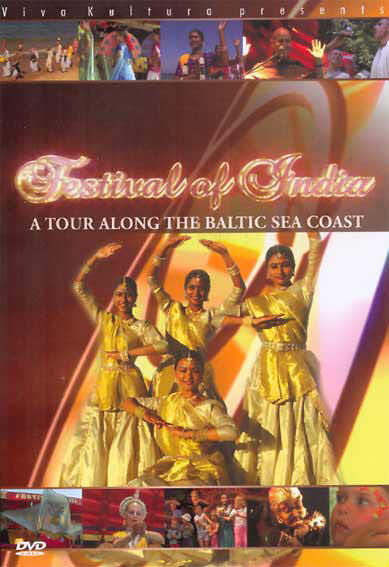 News of the good weather along the Baltic Sea coast spread throughout Poland, and the beaches swelled with vacationers from all over the country. By the second day of Harinam on the crowded streets of Niechorze, the town was buzzing about our festival for that evening. As I brought the Harinam back to the festival site in the afternoon, a young man came up to me.

“I’ve been watching you singing and dancing all day,” he said. “Is this something new or an ancient tradition?”

“It’s one of the oldest spiritual traditions in the world,” I said. “It’s based on the teachings of Bhagavad-gita, which was spoken by Lord Krsna five thousand years ago.”

“I study a lot of old cultures,” he said. “Did you know the Mayan calendar ends on December 21, 2012? Some people say a cataclysmic event at that time will cause the end of the world.”

“I’m aware of that calendar,” I said, “but the Bhagavad-gita is more authoritative and doesn’t mention that the world will come to an end then.”

“When will it end?” he said as we walked beside the Harinam party.

I chuckled. “Long enough away that you don’t have to worry about it,” I said.

“But I want to know exactly when,” he said.

“At the close of Lord Brahma’s life, the universe will be destroyed,” I said, “and that’s in about 311 trillion, 40 billion earth years.”

“The universe is created all over again,” I said. “Let’s sit on the bench over there, and we’ll talk in more detail.”

We had a long conversation about the creation and dissolution of the cosmos. Finally, he lifted up his hand. “Just look at my arm,” he said. “The hairs are standing on end. You guys have a lot of knowledge. Where can I learn more?”

As we walked towards the festival site, dark clouds suddenly gathered overhead, threatening to rain.

But sure enough, as the first bhajan got under way, it started to rain. People scattered to take shelter in our tents. As I stood dejected, a little girl looked at me with concern. “Sir,” she said, “why does it always rain whenever you have a festival here?”

It continued raining intermittently throughout most of the event. Many people went home, but to my amazement, when the sky cleared during the last hour, people flooded back to the site, eager for any remnants of the show. Within minutes, 600 people were sitting on benches or standing in front of the stage. Every tent was brimming with guests.

I gave a short lecture from the stage emphasizing the importance of chanting Hare Krsna and then went to check on the astrology tent. As soon as I arrived, our astrologer, Prahlad Nrsimha dasa, came up to me.

“Maharaja,” he said, “a very nice gentleman just left. I was reading his chart and offered him advice for more than an hour. When he understood the difficulties that lay ahead in his life, he looked at me and said, ‘I can try to change my bad habits, as you’re suggesting, but I won’t be able to do it alone. I’ll need God’s help. What I really need from you is a prayer. Can you recommend one for me?’

“Just at that moment you were beginning your lecture on the stage. I told him to go outside the tent and listen. When you finished he came back in and said with a smile, ‘I learned the prayer I wanted. Thank you.’ I gave him a set of japa beads, and he was chanting on them even as he left.”

Before the last kirtan our master of ceremonies, Tribuvanesvara das, announced that we would be opening the festival the next day with a Vedic wedding for three devotee couples. As people left I could hear them speaking excitedly about the event.

The rain came back the following afternoon, this time with a strong wind, and we struggled to set the stage for the wedding. At one point I even thought of canceling the event, but suddenly, just minutes before the festival was to begin, the rain stopped and the wind died down. As if on cue, people came out of their homes and tourist bungalows onto the festival grounds.

As the clouds were disappearing on the horizon, a devotee turned to me. “If that doesn’t give one faith in the Lord,” he said, “what will?”

“True,” I said, “and we’ll acknowledge that mercy.”

As I walked to the stage to preside over the marriage, a man with his five-year-old daughter stopped me.

“I want to thank you for giving my daughter this sari onstage last night,” he said. “She was one of the girls who won the dancing competition. When we got home she insisted on sleeping in it. This morning we had to wash it, as she wanted to wear it again today. But as you can imagine, my wife and I had no idea how to dress our little girl in six meters of cloth. I even went on the Internet to search for a method. Eventually, we managed. I was supposed to return to work in Warsaw today, but my daughter cried so much and insisted that we come for the wedding that I called in sick, and here we are.”

The marriage ceremony was a big hit with the crowd of several thousand. While the couples were sitting and throwing grains into the fire and the priest chanted mantras, a devotee was distributing rice throughout the crowd so people could throw it on the couples at the end. But following the example of the newlyweds, everyone started throwing rice into the fire whenever the priest said “svaha.” With every mantra, a deluge of rice would fly through the air onto the stage and into the fire.

A devotee came running up to me. “Maharaja,” he said, “you can’t let them do this. They’re not purified. It will ruin the yajna”

I laughed. “Try to stop them,” I said. “It’s impossible. Just take it as another installment of Lord Caitanya’s mercy.”

After the ceremony I stood before the crowd and thanked them for coming. Then I made an extra announcement. “Ladies and gentlemen,” I said, “before we finish, I’d like to make special mention of someone who is very near and dear to us all. As you know, until the moment we began today, the weather was terrible. Then suddenly it changed for the better, giving us the opportunity to hold this wedding. We have only one person to thank for that, and that is the good Lord above. Please everyone, stand and applaud His mercy upon these young couples.”

I’ll never forget how the crowd applauded the Lord that day. They went on and on, and some even looked towards the heavens. As we were all loudly acknowledging His mercy, I took it to be as good as sankirtan, the congregational chanting of the holy names. Such is the effect of just one of our festivals. I can only imagine what additional nectar awaits us as we continue to spread the mercy of Lord Caitanya along the Baltic coast.

“Some dance so enthusiastically they seem to leap over mountains and oceans, and others repeatedly revile Indra and the other demigods. Who among the devotees headed by Avaitacandra is not now overwhelmed with bliss in the dancing festival of Lord Caitanya?”

The 1st temple to have LIVE Broadcast in Ujjain City

A Russian Vaishnava’s celebration of India