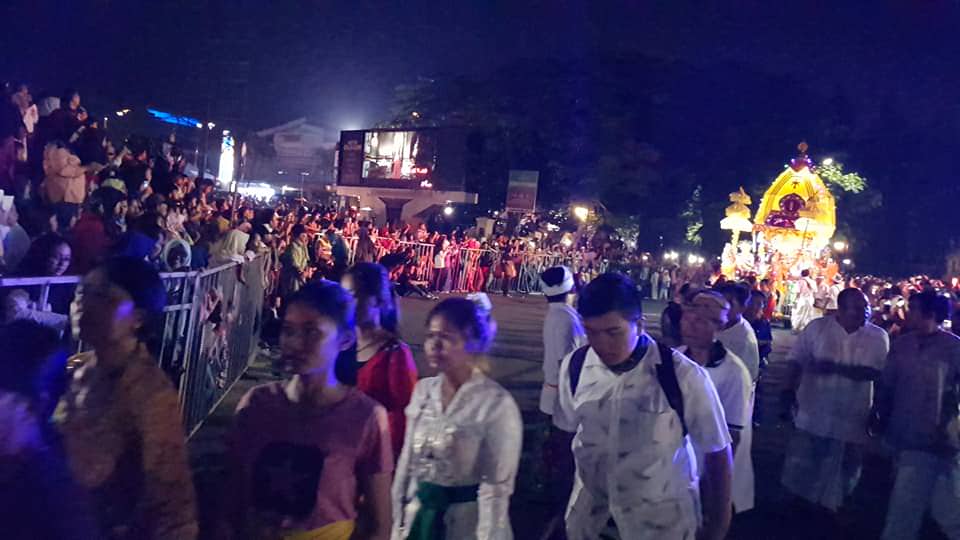 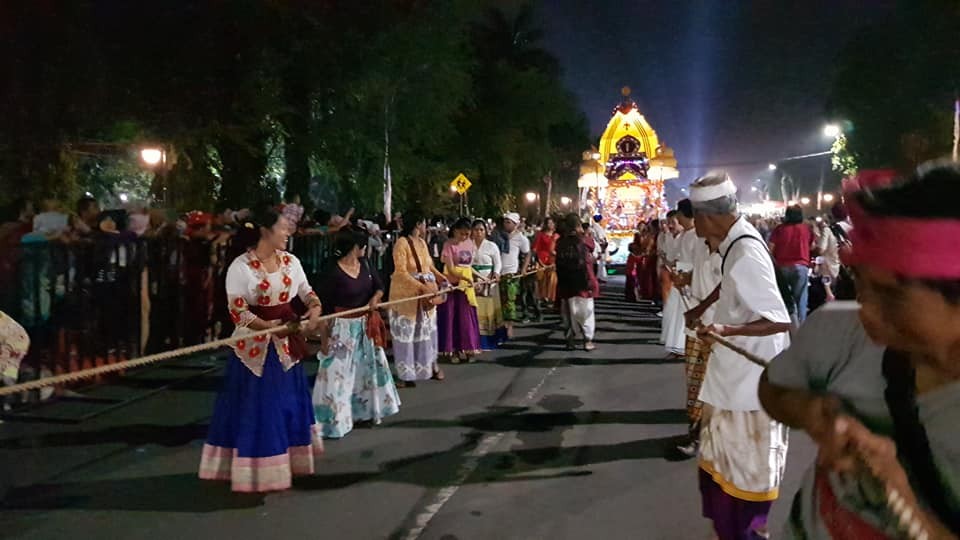 Sunday night, Cilegon was hot. The moon is not round yet, dimly lighted lights on both sides of the road stretching approximately 250 meters full of people on both sides. Young-old, male-female. All liked getting out of the corners of the City. At 07.00 PM the music thrashed. All participants gathered behind the stage except the Lord Jagannath, Lord Baladeva, and Subadra Devi sat on the chariot beside the honored guest stage.

Cilegon Night festival, that was the theme of the Cilegon Ethnic Carnival which is usually done in the daytime. This year the carnival started on the evening that gave special impression both the participants and also for the audiences. The participants of the carnivals prepared their performances as attractive as possible.

“If we perform many festivals in all of our centers around the world, many times during the year, then the general populace will become very much favorably inclined toward us and that will push on this sankirtana movement in the best way.” (SPL to Karandhara, 1st August 1972)

Because of the lack of devotees in Cilegon, the ratha yatra team called the devotees from Lampung to participate. A full bus of devotees arrived early morning in Cilegon on the day of the festival. They helped the chariot team to prepare the chariot. Devotees from Bali arrived on the evening a day before the festival. They brought paraphernalia of the chariot that could not find in Cilegon. Adiprana Prabhu as the coordinator organized the preparation. He was responsible for the success of the ratha yatra.

Arrived at the Cilegon Government’s office, the devotees joined with other participants who already arrived there. The devotees ware under Cilegon Hindu Parisad flag. So, devotees joined it. The chariot park beside the honored stage where the VIP guest sat. as waiting the turn, the participants of the carnival performed in front of Lord Jagannath as if they offered all their performances to the Lord. When the turned came, the Cilegon’s Hindu Community performed Balinese dance. H.H. Bhakti Ananda Hari Das Swami personally gave flower garlands to the mayor of Cilegon. Then the devotees pulled the Lord chariot and amazed the audience. All audiences gave a big applause to the devotees. Some devotees distributed prasadam to the audiences. One ton of oranges that donated by the Dhinadarini Mataji, became seizure among the audiences. H.H. Bhakti Ananda Hari Das enjoyed distributing oranges to the audiences. Maharaja astonished by the enthusiasm of people to get the maha prasadam. Maharaj said that it was real Ratha yatra because people from other faith participated on the Ratha yatra. some of the audiences also joined the devotees pulled the chariot. They sang Hare Krishna Maha Mantra along with the devotees. Many people said that Lord Chariot was the best among the participants.

“For the present, you endeavor to make Ratha-yatra festival grand and successful. You should arrange the procession and procedure so nicely that all the neighborhood people may be attracted to join the procession.” (SPL to Upendra, 1st June 1968)

We offer our heartfelt gratitude to H.H. Kavichandra Swami and H.H. Ramai Swami, the GBCs of Indonesia, for their encouragement to increase sankirtan; H.H. Subhag Swami for being our inspiration, and to all the wonderful senior devotees of Indonesia for their blessings and constant support on Jagannath Ratha Yatra Nusantara. H.H. Bhakti Ananda Hari Das Swami for the special blessing for the Ratha yatra team and devotees at Cilegon Ratha yatra.