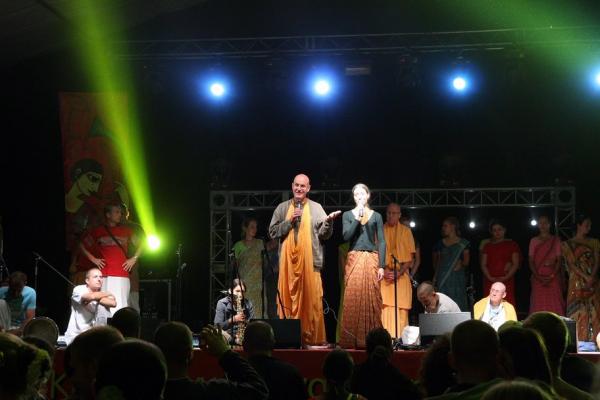 Although we have had resounding success with our festivals this summer, we have had some setbacks as well. We thought we had another setback when Nandini dasi called the man in charge of the amphitheater in Miedzyzdroje, where our festival was to take place in two weeks.

Miedzyzdroje is host to an annual summer event featuring Poland’s best-known movie stars and other entertainers. Its fine beaches draw hundreds of thousands of vacationers every July and August.

“I’m the new director of the amphitheater,” said the man who answered Nandini’s call, “and I say you can take your festival and go back to India.”

“But we have a contract,” said Nandini.

The man laughed. “Your contract’s in my garbage can,” he said and hung up.

The next day Nandini called the town hall to inform officials we wouldn’t be coming. “We have to cancel all previous arrangements for water, electricity, and security for our festival,” she said. “The director of the amphitheater canceled our event yesterday.”

“Oh, no,” said the woman who answered the phone. “Wait just a moment. Let me get the mayor’s secretary.”

“How dare he treat you in such a way!” said the secretary. “Let me discuss this with the mayor, and we’ll get back to you.”

Meanwhile, we began making plans to do the festival in another town.

Two days later the mayor’s secretary called Nandini. “The mayor knows of your event,” she began. “He would like to offer you the grassy field just off the boardwalk this weekend for your festival. It’s where the festival for the movie stars is held each summer. We’ve never given it for any other function.”

“Hello?” said the secretary. “Are you there?”

Nandini collected herself. “Yes,” she said. “We accept the mayor’s gracious offer. Please thank him.”

Nandini called and told me of the windfall.

But the coming weekend was a week earlier than we had planned for the festival in Miedzyzdroje.

“We don’t have enough time to advertise the event,” said Nandini. “It’s only a few days away.”

Two hours later she called me back. “Guru Maharaja,” she said, “you won’t believe what just happened. As I was driving back to our base, I tuned into the main Polish radio channel to listen to the weather forecast. The news was just finishing, and the announcer said that anyone who knew of a significant entertainment event that was taking place this summer could call in, and they would announce it. As he gave the number, I pulled over to the side of the road and immediately called the station.

“After describing our festival in Miedzyzdroje, the station decided to put me on live. I spoke for more than five minutes. I described the entire festival in detail: the stage show, the restaurant, the yoga classes, the exhibitions, everything.

“I concluded by giving my number and the address of our website. As soon as I hung up I was inundated with calls from people asking for more information. Jayatam das just called to say that 600 people have logged on to our website in the past half hour.

“Two minutes ago a representative of the second-largest radio station in the country called. He had been listening to me on the rival station’s broadcast. He said his station wants to do a special show on the festival in Miedzyzdroje. It will publicize the event during the next few days. I’m on my way for the interview now. Along with your Harinam, we now have more publicity than we could ever have imagined. Can you believe it?”

“I can,” I said with a smile. And I quoted a verse that seemed more relevant than ever:

“But those who always worship Me with exclusive devotion, meditating on My transcendental form – to them I carry what they lack, and I preserve what they have.”

The next day we went for Harinam on Miedzyzdroje’s long white beach. Only the wealthy can afford to go on vacation there, so the beach was packed with many well-to-do people. As we stepped onto the sand, I flashed back to the late 1970s, when I would often take a ragtag handful of brahmacaris on Harinams during the summer in St Tropez, a prestigious town on the French Riviera. But people hardly took notice. I remember thinking, “We’re supposed to be representing the highest culture, but we have little to show for it.”

We started chanting down the crowded beach in Miedzyzdroje. “How times have changed!” I thought. Hearing our kirtan, everyone looked up. Many smiled, and why not? The devotees were blissful, the kirtan was melodious, and we all danced in well-rehearsed, choreographed steps. Each devotee wore a colorful silk garland and held either a musical instrument, a beautiful Chinese fan, an exotic flag, or an umbrella from Bali. People carefully read our attractive invitations. None ended up on the ground – a sure sign that many would come to the festival.

As we passed a family lying in the sun, the mother stood up with her three-year-old daughter in her arms. “One day, darling,” said the mother to the daughter, “you can join the Hare Krsnas.”

Yes, the times have definitely changed, and the reason is the devotees’ enthusiasm for chanting the holy names. Because we chant for long hours every day, the devotees are always in a joyful mood. I sometimes lament that, for whatever reason, there is not as much kirtan in our movement on a daily basis as there used to be. Kirtan is central to happiness in every devotee’s life.

“As long as the devotees remained at Jagannatha Puri with Sri Caitanya Mahaprabhu, the pastime of sankirtan was performed with great jubilation every day.”

The day of the festival we held a last Harinam along the boardwalk. We had already distributed more than 30 thousand invitations, but we wanted to make sure that as many people as possible were informed. As we chanted and danced up and down the long walkway, we passed the grassy area where our boys were setting up the huge stage and colored tents. It was a big operation, and people stopped to watch. At one point we also stopped and had kirtan in front of the site.

While distributing invitations I overheard a lady talking to her friend. “They were in the amphitheater last year,” she said. “Now they have a much better location. Just look at their stage. Now we’ll really get to appreciate their festival.”

As we wound around town one more time, a devotee pointed out that people were wearing silk garlands similar to ours.

“They sell them in the shops,” he said. “I’ve seen a lot of people wearing them along the coast. It’s like a fad now. I’ve even seen some people with fans like ours.

The devotee frowned. “They’re just copying us,” he said. “They’ve obviously seen our Harinams over the years, and now they’re copying us.”

“No,” I said, “it’s good. There’s a saying that imitation is the highest form of flattery.”

I took the Harinam party back to the site a little early so everyone could rest and take prasadam. But to my amazement, people started arriving an hour before the event, and I had to push the devotees to finish prasadam quickly and begin their festival duties. By the time the show started, there were three thousand people in front of our stage. Thousands more moved throughout the site. Every tent was overflowing.

“It’s our biggest festival ever,” I said to Jayatam.

“Yes,” he said, “and the quality of the people is the best ever as well.”

I took a chair and sat on a knoll overlooking the festival. “All the hard work,” I thought, “all the organization, the fund-raising, the obstacles – it’s all worth it just for this one event.” I sat for a few minutes, relishing the sight of so many people enjoying Krsna consciousness.

Then a girl of about 16 came up to me with a friend. “Do you remember me?” she asked.

“Seven years ago,” she said. “I was on vacation with my parents, and we came to your festival in Pobierowo. You were telling some children’s stories about Krsna, and I sat and listened for a long time. It was so enchanting.

“I begged my parents to buy a book. Although they were opposed to your movement, they somehow agreed, and it eventually ended up on a bookshelf in our house. As I grew older I used to read it whenever they weren’t home. In the back of the book it explained how to make chanting beads. One day I went through my mother’s costume jewelry and fashioned a string of pearls into chanting beads. I’ve been secretly chanting on them ever since.

“I was elated when I found out you had a festival here today. I begged my parents to come. They were hesitant but finally agreed. We’ve been through all the tents and exhibits, and they watched the stage show. Now they’re eating in your restaurant. I can’t believe it. You’re festival is so wonderful that they’ve had a change of heart. They even agreed I could buy real japa beads in the shop. And look, I have neck-beads too. You can’t imagine how happy I am. I wish there were a way I could repay you.”

I smiled. “You already have,” I said. “Your words are more valuable to us than you could ever imagine.”

That night, in the final kirtan, many people danced with the devotees. I even saw a man in a wheelchair spinning around when the kirtan got going. The teenage girl was there too, dancing with abandon in front of the stage. As she chanted, her eyes lit up and she held her arms up high. Off to the side her parents looked at her and smiled slightly.

I also smiled as I witnessed the power of the holy names melting the hearts of the fallen souls of this age.

“As the sound of the sankirtan penetrated the ether, the entire three worlds began to float on waves of happiness. Huge crowds of people eagerly pushed forward to get a glimpse of the Lord’s beautiful dancing, as the demigods showered flowers on His head. Even the lame, the blind, and the deaf suddenly forgot their handicaps and hurried to join the sankirtan. Stonehearted people wept in joy upon hearing the melodious chanting of the Lord’s holy names, and animals and birds became restless.”

2 Comments to “ Times Have Changed”