Hare Krishna cultural parade, feast at Festival of the Chariots in Venice 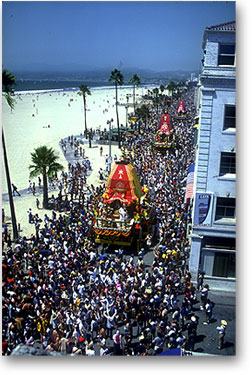 The 30th annual Festival of the Chariots, a Hare Krishna celebration that includes a parade, a free feast and live entertainment, is coming to Venice Beach Sunday, July 30th.

Each year, a procession marches from Santa Monica accompanied by three towering red floats (devotions to deities of ancient India) that end up on Venice Beach for an afternoon celebration.

The procession begins at 10 a.m. at the Santa Monica Civic Auditorium, 1855 Main St., Santa Monica. Marchers end up near Ocean Front Walk and Windward Avenue in Venice, where the afternoon festivities begin.

Admission is free, and the public is invited to join the parade.

The event is organized each year by a West Los Angeles-based group of Krishna devotees, the Los Angeles Chapter of the International Society for Krishna Consciousness (ISKCON).

Members of the crowd will use ropes that are attached to the side of the floats to pull them along the route and down Ocean Front Walk.

The floats have large red cloth canopies that are emblazoned with Sanskrit inscriptions and drawings based on Vedas scripture. They are decorated with fresh flowers, flags and banners.

Crowds of dancers, singers and beach-goers typically walk alongside the float.

Within the floats are wooden carvings of Krishna deities.

The parade used to begin on Santa Monica Beach, but the start moved to the Santa Monica Civic Auditorium when the City of Santa Monica placed new regulations on large public events on the beach.

The hand-pulled chariots make their way south on Main Street in Santa Monica, then head west on Rose Avenue in Venice and finally are steered left onto Ocean Front Walk and proceed south to the heart of Venice Beach near the ocean end of Windward Avenue.

Once it reaches Venice, the festival will feature a free feast (20,000 plates prepared in the Krishna tradition) and three stages of live entertainment that includes drummers, sword fighters, Indian dance performances, drama and “mantra rock.”

The event will also have information booths on Hare Krishna traditions and beliefs as well as Indian art and culture.

There will be exhibits on yoga and meditation, reincarnation, spirituality, vegetarianism and animal rights.

Children’s games and gift booths will also be set up.

On the main stage, Viji Prakash will give a dance performance.

The band Gauravani will bring its electric “East meets West” rock and saxophone sound to the main stage.

There will also be a dramatic performance with storylines and teachings from Indian classical literature.

The idea for the Venice/Santa Monica Festival of the Chariots is based on an ancient festival that takes place annually in the Indian holy town of Jagannatha Puri.

The festival is a celebration of Indian Vedas scripture and the ancient Indian god Lord Jagannath.

Each year in India, the festival attracts massive numbers of pilgrims, and organizers compare the festival to the Kumbha Mela.

The local Festival of the Chariots is seen by an estimated 50,000 people each year, according to organizers.

2 Responses to “Hare Krishna cultural parade, feast at Festival of the Chariots in Venice”