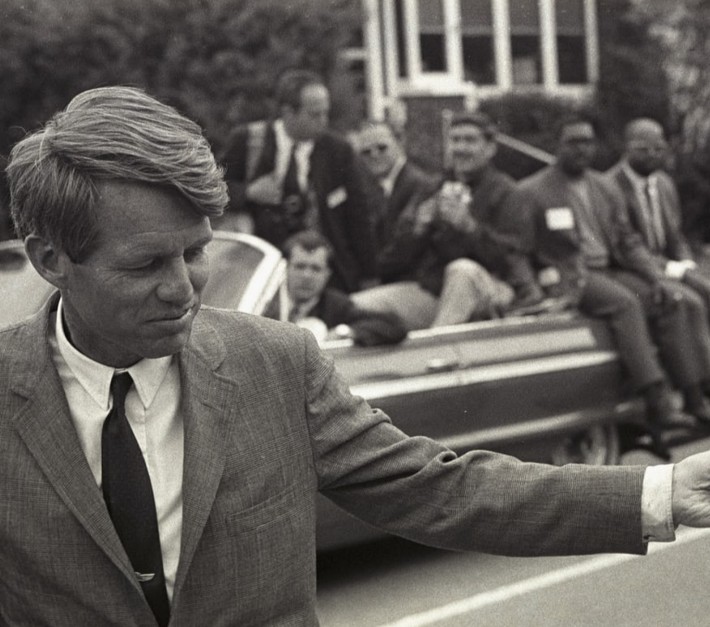 I think your readers might find of interest the enclosed article from The Guardian which explains how Allen Ginsberg taught Robert Kennedy how to chant Hare Krishna mantra. He received this mercy just months before being assassinated several years ago.

Incidently, the article also mentions how Walter Reuther, (who is my wife, Lekhasravanti’s late father) was the person who requested Robert Kennedy to help Cesar Chavez and the plight of the migrant farm workers. At Reuther’s request Robert Kennedy did get involved and historians state it was a major issue that drove him to run for president. Lekhasravanti’s parents were killed in a 1970 plane crash. Lekhasravanti inherited a half million dollars from their life insurance policy which she used in Krishna’s service including co-purchasing the Fisher Mansion with Ambarisa prabhu at Srila Prabhupada’s request to become Detroit’s Hare Krishna Temple.

I’m sure most devotees are not aware Robert Kennedy heard the holy names shortly before departing this world.

yours in Srila Prabhupada’s service,

To read the whole article: https://goo.gl/vx6bxv

Ginsberg bade Kennedy goodbye and rejoined Walinsky and Jeff Greenfield, then a junior speechwriter on Kennedy’s staff, in their small office. Only then, with a start, did he realize he’d neglected to do something with the senator, something more important than any words they’d exchanged. And, as luck would have it, Kennedy happened into the room. It was as if he’d hadn’t had quite enough of Ginsberg, and had come back for a bit more.

“Wait a minute,” Ginsberg told him. “I wanted to sing you the Hare Krishna mantra. Can you stay and listen? It’ll just take one minute.” After Kennedy agreed, Ginsberg pulled out his harmonium. “He has this one-tone mouth harp, so he blows his note on that – what’s the sound? Mmmmmmmmmmgggg?” Edelman recalled. Ginsberg chanted two choruses. “I think Kennedy was kind of … I don’t know if it was delighted or amused,” Greenfield recalled. “I think he was kind of intrigued.”

“What was that?” Kennedy had asked.

“That’s a magic spell for the preservation of the planet,” Ginsberg told him. “Hear it once and you’re immediately enlightened.”

“The guy on the other end of Pennsylvania Avenue needs that more than I do,” said Kennedy. “You ought to sing that to the guy up the street.”

“Well, make an appointment for me,” Ginsberg replied. But he never did see Lyndon Johnson.

Mick Jagger gets treated to the sight of a Hare Krishna parade rolling down Boylston Street!