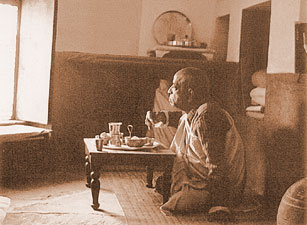 Protest through “harinam sankirtan” has begun

If someone wants to find a way to protest, they should learn from the foreign Krishna bhaktas. They’ve found a new way to protest the sealing of the place of worship of Srila Bhaktivedant Prabhupad, who crossed the seven oceans to preach devotion to Lord Krishna (Krishna bhakti).

The place of worship of the founder-acharya of the ISKCON Mandir, Bhaktivedant Prabhupada is located at the Radha Damodar Mandir at Seva Kunj. The matter is in the court, but the sealing of Prabhupada’s rooms has angered the sentiments of the foreign devotees. They came up with a unique idea to protest this. The Krishna devotees call this harinam sankirtan “satyagraha”, or peaceful protest. They will continue this protest until the sealed rooms are opened! They will not raise slogans (common in street protests in India) nor give public lectures (stating their case). They take mridangas and kartals in their hands and do continuous harinam sankirtan. In their hands they have a picture of Prabhupad Maharaj. Moving through the streets and lanes of Vrindavan they attract the attention of the entire public. Those engaged in this protest say they have no hatred for anyone. They only want that the worship and seva be restored at Prabhupad’s bhajan place. Through the medium of harinam sankirtan they pray that the seal on the rooms on the place of worship of their Lord and spiritual master will be removed. They request the help of everyone to cooperate with this protest.

The Mystery of the Sweet Manifestation of the Lord in New Mayapur, France
A Matter of Perspective