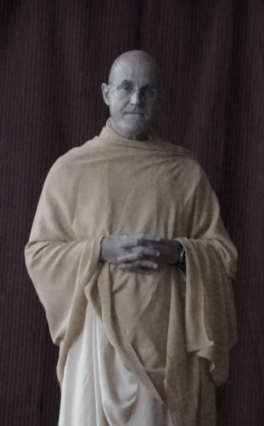 With the success of Polish Woodstock fresh in our minds, we returned to the Baltic Sea coast for our last two weeks of festivals. We had completed 40 to date, and the devotees were exhausted.

But I knew the devotees wouldn’t agree to canceling any of the remaining programs. They had felt the deep satisfaction of preaching Krsna consciousness, and nothing was going to stop them. Some managed to catch a few hours of extra rest here and there, while others nodded out on the job, but by Krsna’s mercy we went on and somehow held our festival in Mrzezyno, just two days after returning to our base.

We enjoyed perfect weather the first two days of the next festival, in Rewal. On the third and final day, we began preparing early in the morning for a Vedic wedding of two couples, expecting a big crowd. But Mother Nature had other plans, and just before noon it began pouring rain. The rain continued unabated and 20 minutes before starting time, I called Jayatam das to say I was canceling the event. The brides and grooms looked devastated.

I turned to them. “We can’t conduct an outdoor marriage in the middle of a storm,” I said.

Just as I ended the call I glanced towards the entrance of the festival grounds. I couldn’t believe my eyes. Hundreds of people were coming onto the grounds, each one carrying an umbrella. I watched dumbfounded as they wiped the water off the benches in front of the stage. Within minutes the benches were full. I counted 632 people.

By that time many devotees had gone to the buses to go back to our base. I ran behind the stage and jumped into one of the buses.

“Prabhus!” I yelled. “Hundreds of people are sitting in front of the stage! The wedding’s on!”

No one moved. They sat staring at me in disbelief.

Within minutes all the devotees had returned to their duties around the festival site. I stepped onto our covered stage to address the crowd and looked out on a sea of umbrellas. In between, here and there, I saw a face or two peeking out from under them.

“Ladies and gentlemen,” I began, “I must thank you for coming today in this terrible weather. We were about to cancel this event, but seeing your enthusiasm, we have decided to continue. Let the wedding begin!”

Everyone applauded, and the two grooms and a kirtan party made their way forward to the stage. Like everyone else, each groom carried an umbrella over his head. As they reached the stage, I introduced them, and the crowd roared with pleasure.

Next the two brides came forward with their kirtan party. The crowd rose and stood respectfully as the girls passed by. The brides came on stage and circumambulated their husbands to be, and as I introduced them, the storm became more intense.

Throughout the ceremony it continued to rain, and sometimes I had to speak up in order to be heard over the downpour. People watched intently, sometimes adjusting their umbrellas.

But no one left. Everyone stayed for two hours, until the very end, and rushed forward to give presents and take photos with the couples when they came down from the stage.

I turned to Amritananda das. “That’s one wedding I’ll never forget,” I said with a chuckle. The crew cleared the stage for the rest of the program.

Heavy rain was predicted for the rest of the week, making it almost impossible to advertise our last festival, in Ustronie Morskie. Nandini dasi called the town hall and asked officials to post a warning on its website that if the bad weather prevailed we would have to cancel the festival.

The next morning the office was deluged with calls from people requesting that the festival go on at any cost. Finally, a secretary changed the number on the website to Nandini’s cell-phone number, and Nandini was inundated with calls all afternoon and into the evening.

Nandini finally called me. “Guru Maharaja,” she said, “it’s like you say in America, ‘Rain or shine the show must go on.'”

Despite the bad weather, some people were out on the streets of Ustronie Morskie shopping, and we were able to do Harinam. As we got out of the buses one morning and started down the street, a well-dressed man ran up to me and began vigorously shaking my hand. “You’re here!” he said. “Thank you! We heard you might not come. We’ve been waiting for you.”

When I woke up on the day of the festival, I looked out the window and was disappointed to see it was still raining. I was even more discouraged when I went online and saw the weather report: it would continue raining steadily for two more days.

“Not the way I hoped to end a successful tour this year,” I said to myself. “It’s always best to end on a high note.”

Sure enough it poured throughout the day. I passed by Dominik, who was setting up the sound equipment on the festival site. “Maharaja,” he said, “nothing short of a miracle will stop this storm.”

He broke into a smile, “But I’ve been on this festival tour for 10 years,” he said, “and I’ve seen plenty of miracles.”

Because it was the last day of the tour, I went around thanking devotees for their service. When I had almost finished, one of our hired security guards approached me.

“Sorry about the rain,” he said. “Looks like it will be the first time you’ll have to cancel the event this summer.”

I looked up at the sky. “Maybe it will change,” I said.

“It’s a long shot,” he said. “The show is supposed to start in an hour. Anyway, I did want to thank you for all these wonderful festivals. I love these programs, and I don’t need this job. I’m an accountant by profession.”

“Yes,” he said. “I took this job only so I could be with you people all summer. I love it when I’m assigned to guard the questions-and-answers tent. I learn so much.”

Forty-five minutes before show time, the rain slowed down to a heavy drizzle. No one expected it to stop, save perhaps Dominik. I was watching him make the last adjustments on the sound equipment when the wind suddenly began blowing strongly. As the wind roared, Dominik smiled and looked upwards.

I’ll never forget what happened just then. Right before our eyes, the big, dark clouds started moving across the sky. It was happening so fast it seemed as if someone were fast-forwarding a video. After a while the sun broke through, and in the distance we could see clear sky. Devotees started to cheer.

Forty minutes later the clouds were gone. Then the wind died down as quickly as it had started. I looked at my watch. There were just five minutes left till show time.

Dominik turned to me with a smile, “It’s not the first time, Maharaja,” he said, “but it is amazing. There’s not a single cloud left. ”

As I moved around getting everything ready, I watched the familiar sight of people flooding into the festival at the last minute.

Suddenly Amritananda jumped up. “Hey!” he shouted loud enough for all to hear. “There’s a rainbow!”

I looked up and saw a beautiful rainbow perfectly framing our stage.

A few latecomers took their seats. The stage show started, and the audience applauded loudly. “Only God himself could write this script,” I thought. “It’s a perfect ending to a perfect summer tour.”

Srila Prabhupada writes: “The Madhya-khanda of Srila Locana dasa Thakura’s Caitanya-mangala also relates that once at the end of the day, when evening clouds assembled overhead and thundered threateningly, all the Vaisnavas were very much afraid. But the Lord took His karatalas in His hands and personally began chanting the Hare Krsna mantra, looking up toward the sky as if to direct the demigods in the higher planets. Thus all the assembled clouds dispersed, and as the sky became clear, with the moon rising, the Lord began dancing very happily with His jubilant and satisfied devotees.”