How to Achieve the Ultimate Goal of Chanting 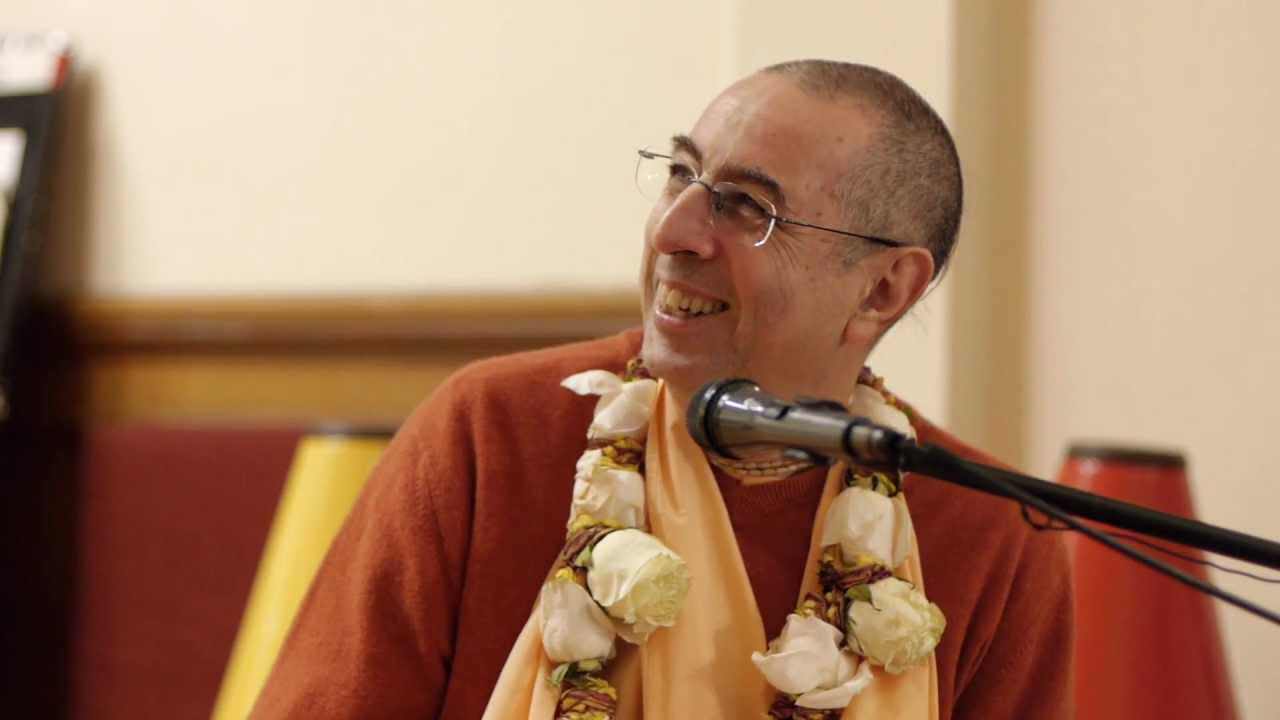 Excerpt from the lecture by HH Nirañjana Swami

This verse stresses the importance of chanting the Holy Name so that one can achieve the ultimate goal of this chanting. I wanted to read something also in connection to this. It is short but very relevant to this verse. In the words of our param-guru Śrīla Bhaktisiddhānta Sarasvatī Ṭhākura, in answer to the question, “How should we chant the Lord’s Holy Names?” I find this very relevant to myself and therefore I’ve been sharing it with many devotees and I would like to read it first, and then in some way try to explain the meaning behind it.

“Pure devotees do not chant the Lord’s Names to counteract sinful reactions, accumulate piety, attain heavenly pleasures, to mitigate famine, devastating epidemics, social unrest, disease, civil strife or to obtain wealth or an earthly kingdom. Since the Lord is the Supreme Personality of Godhead, to ask Him to fulfill our wishes is to treat Him as our servant. This is an offense. Therefore, calling the Lord’s Names for any reason other than to attain His devotional service is useless. Jesus Christ told us not to take the Lord’s Name in vain.

I thought this was very relevant. Śrīla Bhaktisiddhānta Sarasvatī Ṭhākura here explains that unless one is actually chanting for the service, then any other purpose – any other purpose – is materially motivated. And he gives a long list of what is materially motivated: for social unrest, for epidemics, for material prosperity, any chanting to relieve distress, whether individually or collectively.

Therefore, he uses a strong word, he says it’s ‘useless’ – which we may question, because sometimes we hear so many verses which explain that even once chanting the Holy Names of the Lord will eradicate all kinds of sinful reactions for millions of births. And here somebody may be chanting, collectively with a large group, for a particular purpose, yet he defines it as useless chanting.

It makes me think of a verse in the Śrīmad-Bhāgavatam, in the 3rd Canto, spoken by Devahūti. She says that anyone whose work does not lead to religious life; and any one whose religious, ritualistic performances do not elevate one to renunciation; and anyone who is situated in renunciation that doesn’t lead to devotional service to the Supreme Lord, is to be considered to be a dead body, although breathing.

As long as the desire for bhukti (the desire for material enjoyment) and mukti (the desire for relief from suffering, liberation), are within the heart (these desires are considered to be like two witches which haunt one like a ghost), then one will never be able to taste the bliss of devotional service to the Supreme Lord. And therefore it is stated in Caitanya-caritāmṛta that the goal of chanting is to achieve this love.

Śrīla Bhaktisiddhānta Sarasvatī Ṭhākura here also states that to approach the Lord for something for ourselves is an offense. We should not ask anything for ourselves. He says that all these other purposes for which one chants are considered to be useless, unless we actually purposely, with intent, sit and intensely pray for the service to the Lord. That service, that opportunity to engage in devotional service, is bestowed by the mercy of the Lord, and also bestowed by the mercy of the devotee of the Lord.

Śrīla Prabhupāda in his commentary quotes the verse that Śrīla Bhaktisiddhānta Sarasvatī Ṭhākura emphasizes as the siddha-praṇālī for Gauḍīya Vaiṣṇavas, which is, [Śikṣāṣṭakam, verse 3]

Lord Caitanya Himself has stated, when explaining this verse, that a devotee who is engaged in the chanting of the Holy Name of the Lord does not retaliate, even if he is rebuked or chastised. He never retaliates or says anything to anyone else about such activity. He gives an example that, even if a tree is cut, the tree will not complain, and even if the tree is drying up, it will not ask anyone for water. He says that such forbearance must be practiced by the devotee. Thus a Vaiṣṇava should engage in the chanting of the Holy Name of the Lord, and he should never ask anyone for anything for himself. If someone offers, he will accept, but if someone doesn’t offer, he is satisfied to accept whatever comes by its own means.

But then He says something very, very important: this type of behavior solidly maintains a devotee’s devotional service. This type of behavior: he doesn’t ask, he tolerates. So forbearing! There is a verse in the Śrīmad-Bhāgavatam,

“The devotees of the Lord are so forbearing that even though they are defamed, cheated, cursed, disturbed, neglected or even killed, they are never inclined to avenge themselves.” [Śrīmad-Bhāgavatam 1.18.48]

But then he realized, “Wait a minute!” tiraskṛtā vipralabdhāḥ, śaptāḥ kṣiptā hatā api. “How will it be possible? Parīkṣit Mahārāja wouldn’t do that. Because devotees of the Lord are so forbearing, that even if they are cheated, cursed, neglected, disturbed, insulted or even killed, they are never inclined to avenge themselves. What can I do? Parīkṣit Mahārāja will never counter-curse. I can only simply pray to the Lord, that somehow He sees the situation and He understands what needs to be done to correct the situation, because Parīkṣit Mahārāja will never counter-curse my son.”

Such is the characteristic of a devotee. A devotee is so forbearing. Cheated, cursed, neglected, insulted – insulted! – disturbed or even killed! But he will never avenge himself. Why? Because he is so forbearing, he is so tolerant!

Look what happened to Ambarīṣa Mahārāja! When Ambarīṣa Mahārāja was cursed he didn’t even pray to the Lord for protection, but the Lord protected him. Durvāsā Muni first went to Lord Brahmā; then he went to Lord Śiva; and then he went to Lord Viṣṇu. Of course, Brahmā and Śiva were not able to provide him relief, because that’s what he wanted, he wanted relief. “Please relieve me.” Brahmā says, “I can’t.” Then Lord Śiva says, “I can’t.” And then he came to Lord Viṣṇu and said, “Please look at me, I am suffering.” And Lord Viṣṇu says, “Sorry, I can’t do anything to help you.”

Śrīla Viśvanātha Cakravartī Ṭhākura in his commentaries to these verses explains the mood the Lord has in His conversation with Durvāsā Muni. When Durvāsā Muni approaches the Lord for protection and says, “Please, can You mitigate my distress? You have invoked this cakra, certainly You can remove it.”

And then, what does Durvāsā Muni say? He says, “Certainly, when You see somebody suffering and they are coming to You for protection, certainly You must be inclined to feel for his suffering.” He’s begging, “Please have a heart.”

Durvāsā Muni says, “How is it possible?”

How to break habits

Srila Bhaktisiddhanta Sarasvati Thakura’s commentary on the story of Ekalavya