Our Progress in Life is Gauged by Our Chanting 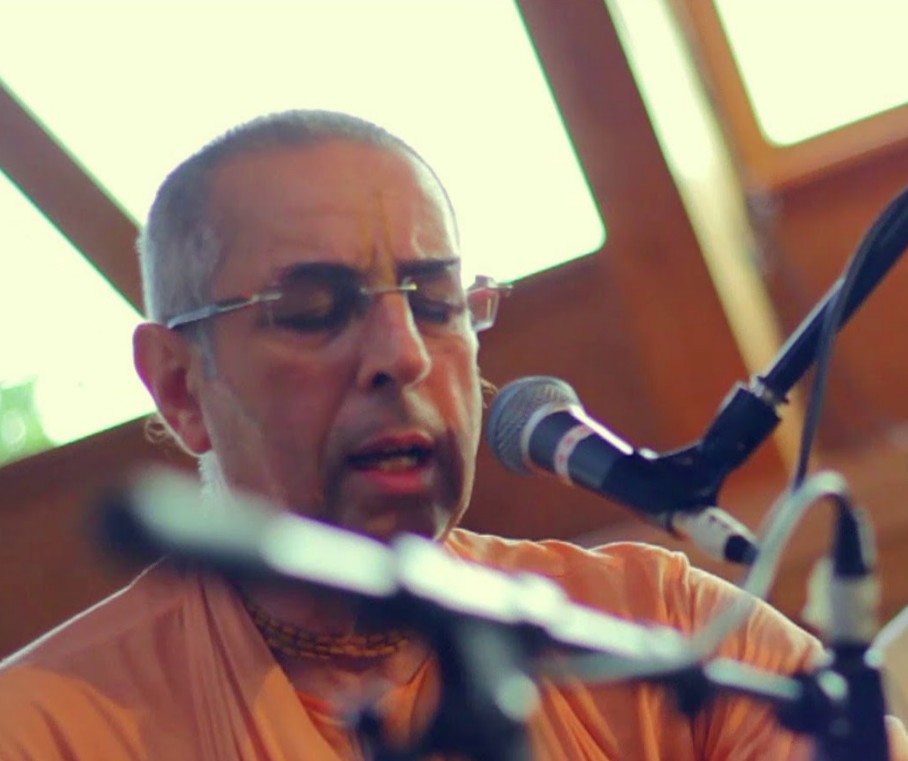 As we all know from various understandings of Kṛṣṇa consciousness philosophy, our life is going to move just like this also. Sometimes when we realize how quickly our life is passing by, we begin to analyze: “Where am I going?” These are good thoughts, “Where am I going? What direction am I moving towards?”, because as we know, everybody by nature has to have some goal, some aspiration in life. Sometimes we get caught up in immediate goals, and sometimes even we hear an expression: “I am just taking it from day to day.” It is very common in America. I know that people often times will say like that when you ask them how they are doing. “Well, I am just taking it day by day.” Their goal is simply to make it to the next day. And usually ‘just to make it to the next day’ means ‘just so I can survive’. If I’ve survived to the next day, at least the next day I can have my goal for the following day.

But as we know, by practicing Kṛṣṇa consciousness and by chanting the Holy Name, we are supposed to establish higher goals than that. Time is passing by very quickly, our lives are passing by very quickly, and we should actually feel that we are making some progress towards real goal in life. vāsudeva-parā gatiḥ [Śrīmad-Bhāgavatam 1.2.28-29]: The Supreme Lord Vāsudeva, He is parā gatiḥ, He is the supreme goal. In so many places in Bhagavad-gītā Kṛṣṇa says, “Those who make Me the goal of their life and worship me in devotional service, they will come to Me.”

Srila Rupa Goswami says that although there is no difference between Kṛṣṇa and His Holy Name, still Krsna’s name is more merciful than Krsna because offenses to Krsna can be forgiven by chanting His names. (Namastaka 6)

But what are the circumstances by which one can be forgiven for his offence to the Holy Name? It’s all simply based on one’s attitude towards the Holy Name.

It’s also said that one who chants on the platform of nāma-ābhāsa commits offences due to weaknesses of heart (hṛdaya-daurbalyaṁ) and ignorance. If out of foolishness or bewilderment one chants the Holy Name of the Lord and still commits some offences, then the Lord takes his attitude into consideration. Because person in ignorance just doesn’t know better; and a person who is weak in heart, it is not that he is utilizing the Holy Name to fulfill some other motivations and some other purpose.

Just like Bhaktivinoda Ṭhākura describes the difference between chāyā-nāma-ābhāsa and pratibimba-nāma-ābhāsa: chāyā means ‘shadow’, and pratibimba means ‘reflection’. Actually, there are three definitions of ābhāsa.

First is kānti which means ‘light’. An effulgent object gives light and creates shadow; similarly, the Holy Name of the Lord is self-effulgent, but It also creates shadow. And the shadow which is referred to as chāyā-nāma-ābhāsa is when the person, either out of bewilderment or foolishness, chants the Holy Name of the Lord (with offences), but he is trying to become free from his offences.

But pratibimba-nāma-ābhāsa means that a person is very much attached either to bhoga (sense gratification), or to liberation. He is so much attached that he wants to use the Holy Name of the Lord to fulfill his materialistic goals. His goal is not Kṛṣṇa! His goal is either liberation, like the impersonalist (who may also chant Hare Kṛṣṇa), or he may simply want some material gain. Therefore the word pratibimba is used and it means ‘reflection’.

Just like the sun may come through the clouds after burning through the clouds, and we may see reflection of the light on the water, but reflection is all distorted. Similarly, the pure Holy Name is reflected on the materialistic mentality. That materialistic mentality means that one wants to engage the Holy Name of the Lord to fulfill his own material goals. It’s described that one of the effects of chanting the Holy Name of the Lord is that one can become peaceful, can become free from anxiety. So person may think, “Now I can fulfill my material goals and I don’t have to worry about being in anxiety. I’ll chant Hare Kṛṣṇa without having to worry to be in anxiety in fulfillment of these desires!”

His goals are all in the material world. If his goal is not Kṛṣṇa – Śrīla Bhaktivinoda Ṭhākura says that such a person can never get love of Godhead, can never chant śuddha-nāma, pure Holy Name of the Lord! He says that only by some great fortune, either by the mercy of a great, powerful Vaiṣṇava devotee of the Lord, or by the mercy of the Lord, can one who chants with this mentality ever come to the platform of pure love of Godhead. He says, “But it’s very rare.”

But chāyā-nāma-ābhāsa means ‘shadow’. A person who chants on the platform of chāyā-nāma-ābhāsa is not motivated to fulfill his materialistic goals. He is just weak, and out of weakness he commits offences to the Holy Name, but he wants to become free from these offences. Therefore, Bhaktivinoda Ṭhākura says that if one wants to get off this platform of nāma-aparādha, there are three things required.

The second is called vikṣepa which means ‘distraction’. That means the tendency to be distracted while performing kīrtana, or performing japa. Example is given, just like sometimes people may, instead of chanting in the association of so many devotees, they may chant some other place where they can go back and forth and talk to each other. They are easily distracted towards something else.

But Bhaktivinoda Ṭhākura also says that one has to actually remove himself from distractions externally. In another words, we shouldn’t chant in a place which is going to remind us of so many things that we have to do.

It may be very subtle. We may sit in a room and we may just see our notebook where we keep track of all the things that we are going to do for the day. As soon as we look at that notebook we start thinking about all the things that we have to do for the day. Just immediately! Sometimes devotees will chant with notebook right in front of them, and just look at the notebook waiting for something to come up. [Devotees laugh] The excuse they usually use is that, “If I have my notebook I can write it down and I can forget about it.” But just by having it there, immediately the tendency is that we start thinking, “Let’s see what nectar comes up from my meditation about it.”

Or sometimes devotees sit in front of the computer. There is no question of meditation on the Holy Name in these circumstances.

Or devotees chant while they are driving sometimes. It’s a bad habit. Devotees who are driving, they always ask, “Can I chant my japa while I am driving?” I tell them, “You can certainly chant Hare Kṛṣṇa while you’re driving, but you can’t count it as your japa.” [Devotees laugh] So many distractions! How can one completely commit himself to chanting the Holy Name?!

One is actually supposed to make progress in chanting the Holy Name. Certainly, in these first stages in chanting the Holy Name we have to listen, listen, listen. Prabhupāda says it is very, very important – just listen to the Holy Name. By attentive listening to the Holy Name, the mind is supposed to gradually become controlled and cleared, and when the mind is actually controlled and cleared, then what begins to manifest is a particular form of one’s worshipable Lord. That form may not always be manifested in the mind, but it begins to manifest in a clear mind. Or we may meditate on a particular form of the Deity. We may meditate on Dayal-Nitāi–Śacī-Suta, and meditate on Their form. Or we can chant in front of the Deity and look at Their form.

But these are the types of impressions that are supposed to begin manifest in the mind, because as Bhaktivinoda Ṭhākura explains, that by chanting of the Holy Name of the Lord then comes the form, and the qualities, and then the pastimes of the Lord. And then everything is revealed, even one’s eternal relationship with the Lord is revealed by the chanting the Holy Name.

The chanting of the Holy Name of the Lord is meant for those who are committing offences, because in the beginning, even though one may be chanting with offences, gradually he will become free from offences.

How does one get off the platform from nāma-aparādha to nāma-ābhāsa, and gradually come to the platform of śuddha-nāma? He has to chant with the attitude of “what is the goal of this chanting?!” Even though he may be committing offences while chanting, he has to be thinking, “I want to become free from these offences!” That attitude enables one to make progress in chanting of the Holy Name of the Lord. Just that attitude alone!

Bhaktivinoda Ṭhākura says, it’s just like if you throw pearls before the swine, the swine will simply walk all over it with its feet. And if you give a monkey very nice clothing, monkey will simple rip it up. Similarly, if one initiates one into the chanting of the Holy Name of the Lord, but if that person has no faith in chanting, that person will commit offences to the Holy Name. He is an aparādhi, he commits offences to the Holy Name of the Lord. No faith!

But, we actually have to chant with this attitude, this intention, “Yes! I want to become free from these offences!” And we should judge, as the time is passing, we should see how much progress am I making in chanting? And if we think, “Actually, I am not making any progress,” then as Bhaktivinoda Ṭhākura says, one has to seek out the association of devotees who are making progress in chanting! Without that association it is very difficult to come to that platform of nāma-ābhāsa, to come from platform nāma-aparādha to nāma-ābhāsa.

Because by that association, gradually what happens is that the secrets of the Holy Name of the Lord can become gradually revealed. One begins to think more seriously about his chanting of the Holy Name. He begins to think, “What am I trying to accomplish by this chanting?” The devotee who thinks like that will always have the impetus to chant his rounds every day, because he understands what the goal is. And he knows that – although he may be traversing slowly – at least he knows, he has a purpose for chanting.

Actually, we wanted to speak about this verse tṛṇād api su-nīcena taror iva sahiṣṇunā, in relationship to the Holy Name. Śrīla Bhaktisiddhānta Sarasvatī Ṭhākura says that this verse from Śikṣāṣṭakam is the siddha-praṇālī for Gauḍīya Vaiṣṇavas. Siddha-praṇālī. Praṇālī means ‘the means by which one can attain siddha, or perfection’. And he also says that this verse is solely intended to teach us how to chant without offences.