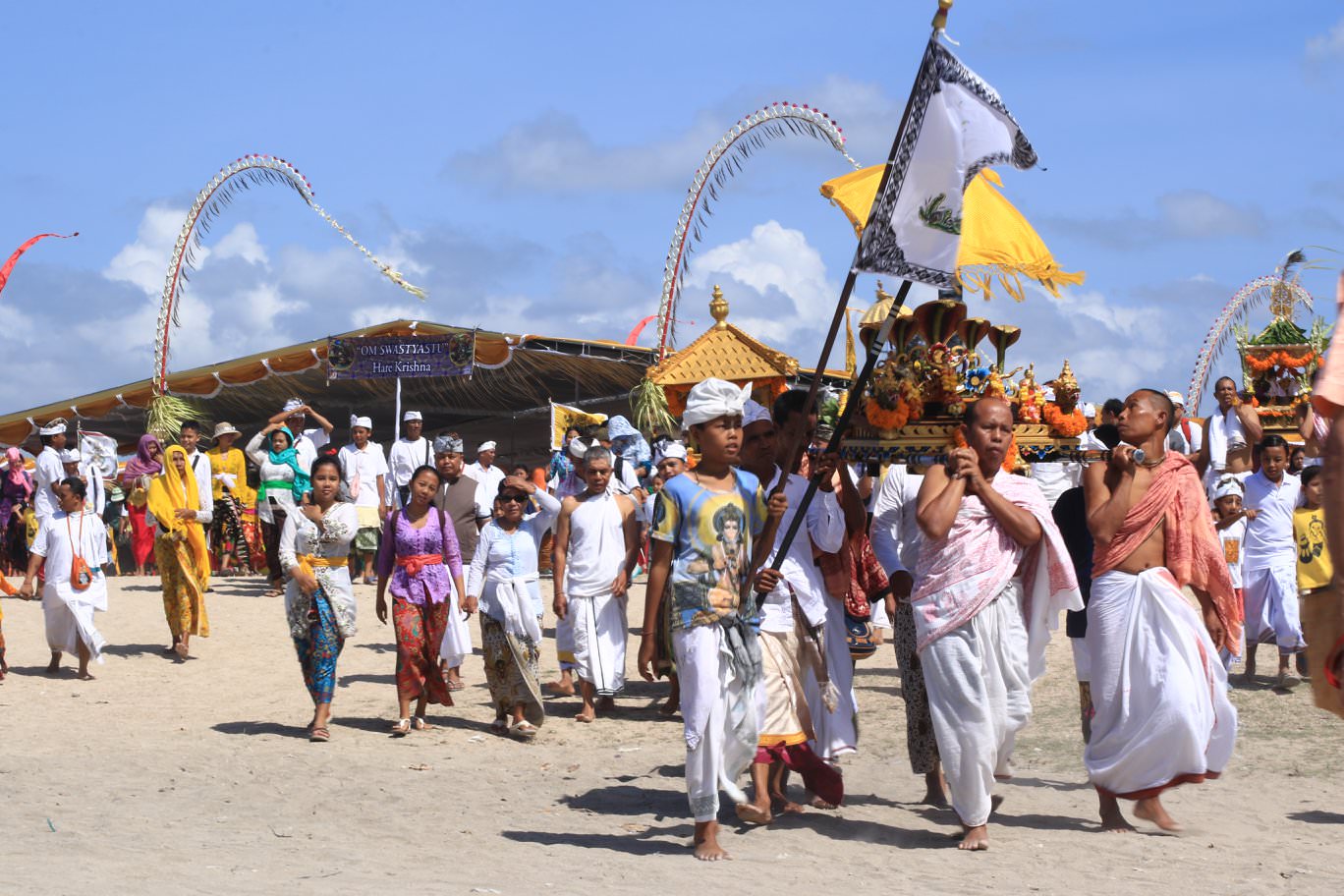 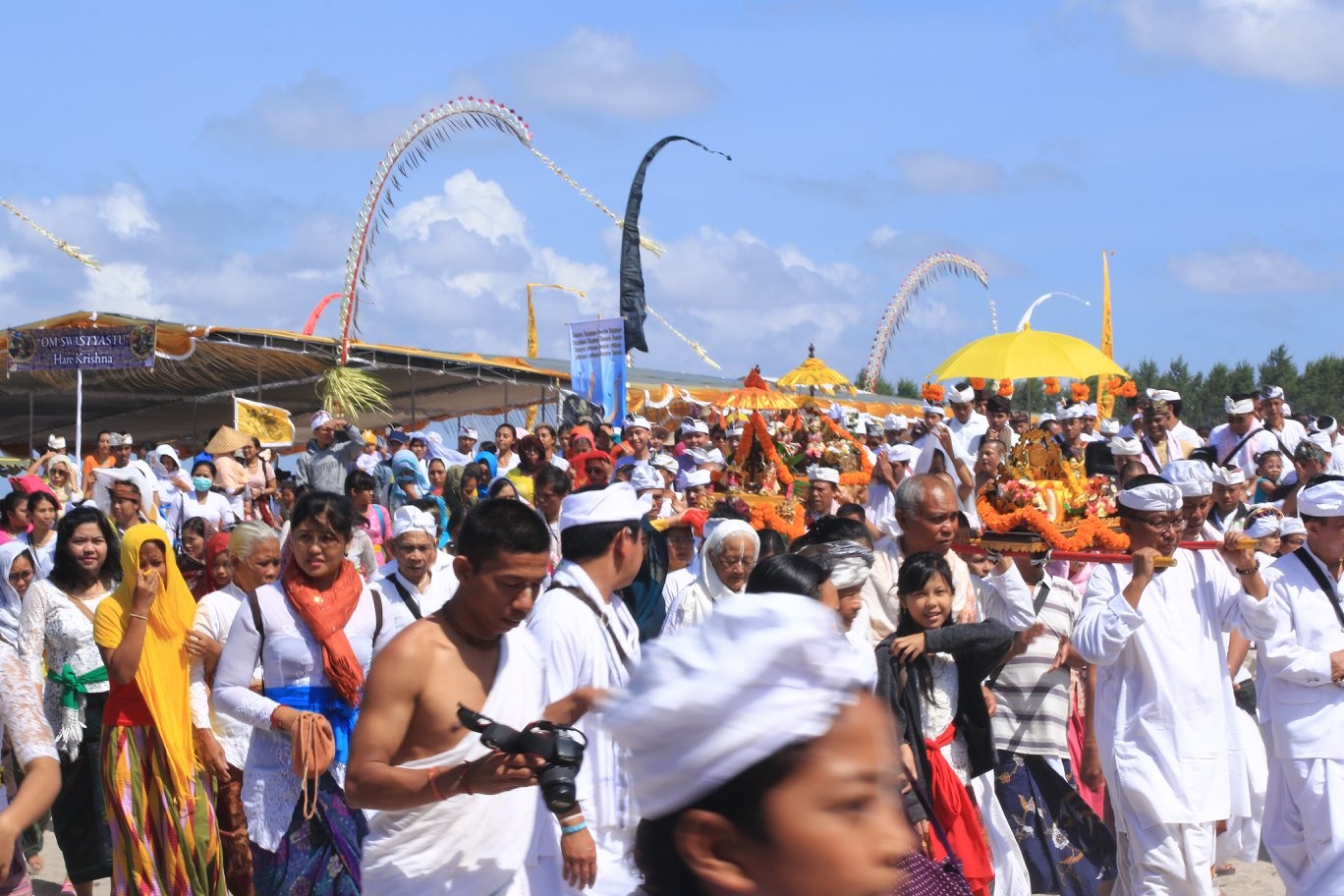 At this time, Raghunätha däsa approached Çré Nityänanda Prabhu and, according to His order, prepared a feast and distributed prasädam composed of chipped rice and yogurt. CC. Madya Lila, Text 283

There is a special preparation of chipped rice is mixed with yogurt and sometimes with sandeça and mango. It is a very palatable food offered to the Deity and then distributed to the public. Raghunätha däsa Gosvämé, who was a householder at that time, met Nityänanda Prabhu. According to His advice, he executed this festival of dadhi-ciòä-prasäda.

When the devotee meets his Lord there will be love exchange that could melt even the hardest rock. This was seen when Raghunatha dasa met Lord Nityananda Prabhu on the bank of the Ganges at Panihati. Lord Nityananda was by nature very merciful and instructed Raghunatha dasa to make a festival and feed all of His associates yogurt and chipped rice. By the blessings of Sri Niyananda Prabhu, Raghunatha das ultimately received the mercy of Sri Chaitanya Mahaprabhu. The essence being that one readily becomes eligible to receive the highest benediction from the Supreme Lord, attaining love of God, simply by serving the devotees.

Desired to remember the pastimes of Panihati, the devotees of Indonesia, organized the Panihati Cida Dahi festival on July 1, 2018 at Merta Sari beach, Sanur, Bali. This has now become an annual festival where devotees from different parts of Indonesia gather together, along with their deities of Gaura Nitai, to take part in the festivities. This year the festival committee was led by devotees from Sri Sri Radha Kunjavihari Temple, Klungkung and Gauranga Iswara temple Karangasem .

“These public festivals have proven very effective in spreading knowledge about Krsna consciousness to all the citizens.” SPL to Galim dasa, November 20th, 1971.

“…This unique procession has convinced them that our men are very nice and they can organize a great crowd without any violence. That is a fact if people actually want peace and tranquility, they must support this movement whole heartedly and we shall execute our prescribed duties very seriously and sincerely.” SPL to Madhudvisa, 14th April, 1970

It needed great effort to organize such great festival to make it successful. The committee of the festival had made preparations since three months back. The committee felt confidance to do the festival because devotees from around Indonesia gave their support to the festifval. it was completely because of the causeless mercy of the Lord.

H.H. Subahag swami maharaj personally came to participate in the festival. Maharaja arrived a week before festival to inject extra energy and encourage devotees to be more enthusiastic in welcoming the festival.

A day before festival, the devotees were busy collecting the necessary items for the festival. They prepared a huge pandal at the Merta Sari Beach. Some devotees went to market to buy vegetable and fruits, and other things that was needed for the festival. In the evening devotees prepared the fruits and cut the vegetable that would be used the next day. The flat rice was sent from Singapore . Devotees decorated the pandal and the temporary altar that was prepared to hold all the Gaura Nitai deities who would come the next day from different temples in Bali.

At 09.00 am the devotees from all round Bali came carrying their Gaura NItai deities from their respective temples. The deities took Their place on the altar that that was beautifully decorated with flowers. After the dietes offered bhoga then thepujari started offering arati. Groups of kirtan from the temples one by one performed bhajan before the abhiseka. Rejang dance, a Balinese traditional dance was offered to welcome the Lords.

At 12.00 am the deities were put on palanquins and were made ready to be taken to the sea. Devotees gathered in line and carried the deities to the beach to take a bath. The deities entered the waters, followed by the men and children and then ensued a wonderful bathing ceremony and it appeared as if the deities would not want to come of the water. Finally the deities returned to the altar for abhisheka. Pacamrita, juice and panca gavya were prepared to bath the Lord. A melodious brahma samhita was recited by the devotees while the abhiseka was going on. The bhajan team sung hare Krishna mahamantra along the procession. After abhiseka, Maharaj mixed the cidha before it was offered to the Lord. While the pujari offered the bhoga to the deities, maharaj gave lecture on Caitanya Caritamrita about the origin of the Chida dahi festival. devotees heard the lecture attentively even they had to sit under the sunrays because the capacity of the pandal could not hold all devotees. The committees actually prepared the pandal double in size than last year. after greating arati, then dances performed by devotees were offered to the lord. The cida dahi mahaprasad was distributed to one and all. Again this was accompanied by ecstatic chanting and harinam. Many visitors to the beach also received mahaprasad. Many books were also distributed. Goverment TV reporter interviewed H.H. Subaga Swami Guru Maharaja about the festifal. Guru Maharaj explained about the festival and the mission of the Lord that the Lord Name will sing in every town and village all over the world.

“We are finding these festivals very successful for attracting the citizens to our activities. More and more these festivals may be held, at least very large festival in a year, simply for glorifying Krsna in public places.” SPL to Bhakta dasa, November 20th, 1971

We would like to thank HH Kavichandra Swami and HH Ramai Swami, GBCs of Indonesia for their continuous support. We also thank HH Subhag Swami for being personally present at the festival and encouraging the devotees to carry on with different aspects of Sankirtan and thus remain close to Srila Prabhupada. We also take the opportunity to express our utmost gratitude to all the wonderful devotees who came forward to help in the most amazing ways. A warm thank you to all the devotees. Special thanks goes to the team of devotees from Sri Sri Radha Kunjavihari temple klungkung and Gauranga Iswara temple Karangasem.