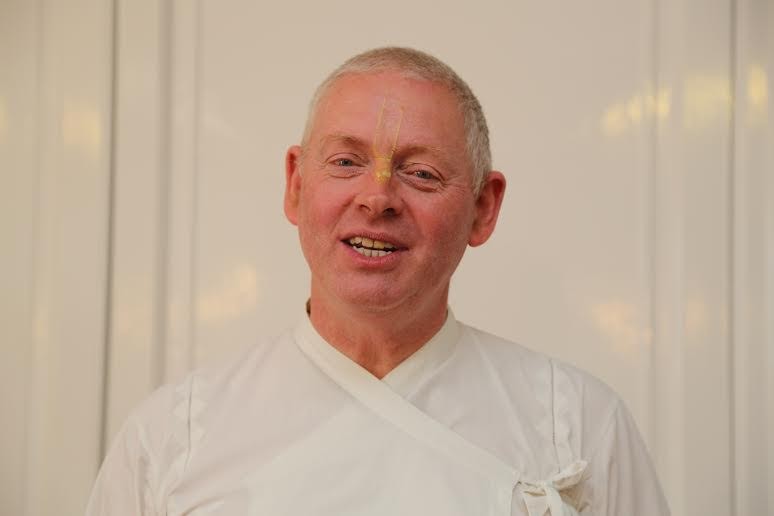 Whether you like it or not, Jehovah’s Witnesses are always ready to do two things (1) Distribute books (2) Sit down and talk with you, and help you to understand. ISKCON has many book distributors, but we need more gurus.

After people have read one of Srila Prabhupada’s books, and if they want to know more, their first question is often something like this: “How can I find out more about all this? Do you have any meetings in my town?” or “Are there any other Krishna people living near me?” That was my first eager question at the age of 16 when I received a Back to Godhead magazine in the streets of Nottingham, England.

If you’re not English, the answer is yes, the city still has a sheriff, although the Sheriff of Nottingham these days is largely a ceremonial functionary – and no, there’s not much of a forest today for Robin Hood and his merry men to hide away in.

But such things didn’t concern me when I was 16. I wanted to know where I could find out more, and if there were any other Krishna people living in Nottingham. I’d already had some sort of introduction to Krishna the previous year, although quite a mysterious one. My father worked for an office machine company and had brought home an old spirit duplicator. By using carbon paper to create a typewriter original, and fluid to transfer the purple print to a fresh sheet of paper, you could, by cranking a handle, produce any number of duplicates. I’m sure there were Xerox photocopiers already in existence, but I was 15, it was 1972 and I didn’t know anyone who had one.

My friends had formed a band and wanted to put on a show. So they asked me if I could design and print a flyer for the event. “What sort of design do you want?” I asked them, happy to oblige. “Well, it’s going to be called the Ananta Disco,” they replied. “How do you spell that word,” I asked, “and what does it mean?”

My two musician friends looked at each other, as if it was some kind of secret they didn’t want to reveal, then burst out laughing. “Ananta is a snake,” said one. “Kind of like a cosmic snake somewhere in the universe.”

“We met some Krishna people a few weeks ago,” said the other, “they had a flat up the hill on Mansfield Road. We had some of their food – it was yellow.`”

I duly designed the ‘cosmic snake’ so that the curves of the snake’s body spelled out ‘Ananta’ with the head on the final letter. When I brought over the batch of printed flyers my friends were happy, but I was intrigued. I wanted to know more but they couldn’t tell me anything, they had no books, and the Krishnas had ‘gone to London to sing along Oxford Street.’

So when I met a devotee on the street in Nottingham in the summer of the following year I really wanted to know where he lived and whether I could come over and ask questions. “We’re traveling” he replied, “and the nearest place is London.” I was disappointed, and the devotee seemed not to want to talk, and moved away to approach another person. “What’s your address in London?” He fumbled in his shoulder bag and gave me a small spirit-duplicated flyer with an image of a long-haired girl in a dress with her hands raised in the air, together with some words repeated down one side. And then he was gone.

So that was how I missed Srila Prabhupada at the Manor in 1973 when he stayed with the devotees for many weeks; an unusual length of time for him to remain in one place. Had the devotee actually invited me to come – which he didn’t – I would have come. Had he taken my address and written to me, I certainly would have made the effort to travel down to London. As it was, I thought that ‘here are George Harrison’s personal friends, and they don’t want anyone to disturb them by visiting them.’ So it wasn’t until the year after that I was actually invited.

But this blog is not about the personal warmth and after-sales communication skills of Krishna book distributors. Rather, its to stress the fact that spiritual movements like ours need to be prepared to help people whenever their spiritual needs are most urgent. And we need to be able to help them wherever they live. It is not good enough to direct people to the nearest city where there is a temple. Our work is enhanced by temples, but cannot be dependent on them. Medical care is enhanced by a hospital but can never be limited by it. People hurt themselves in the most unlikely of places and often the paramedics must come to them. Help must be given when and where it is needed, otherwise people perish.

Spiritual workers must be available in every village. That’s the request of Sri Chaitanya Mahaprabhu, the incarnation of Krishna who came in the form of a saintly teacher. He demonstrated his concern by walking village to village in India for six years, teaching the message wherever he went.

ISKCON has been way ahead of most other spiritual groups in its enthusiasm and competence for initial outreach. In the matter of getting out there and boldly going where no man has gone before we’re bold pioneers. Our book distributors have been everywhere: northern Alaska, Siberia, outer Mongolia, Cambodia and even Timbuktu, and we’ve given millions of people the chance to read about Krishna consciousness. It is nothing less than astonishing. We are still raising eyebrows in the publishing world where a ‘runaway bestseller’ is 20,000 copies, but the Hare Krishnas will only ever print 100,000 copies of a book.

Unfortunately, we haven’t done as well – so far – as other comparable groups in our geographic spread. You’ll find us in the major cities but we fade out in the smaller towns. And we’re not really known for our pastoral care either. Where the Jehovah’s Witnesses will sit down with you to study the Bible, we often can’t find the time to talk with people. But people do require the ongoing tuition, support, guidance and a sense of progress that should naturally follow the initial outreach.

If the devotees of Krishna do not provide these spiritual supports as a corollary of their book distribution, then other organisations certainly will. In the past 40 years everyone with something spiritual to say has set up shop pretty much locally. ‘Alternative Lifestyle and Philosophy’ has gone mainstream and is now available in every book store. And you’ll find some kind of guru or master in every local copy of the Yellow Pages. The disparity between our book distribution and our follow-up is such that, over the years, we’ve helped millions to become familiar with the basic concepts of eastern philosophy, then watched as they went to learn more from local teachers who didn’t tell them anything about Krishna. And those local teachers are quite happy with us and think us to be very helpful for their own private missions.

But as Srila Bhaktisiddhanta Saraswati Goswami said: “Krishna consciousness is so important, so exclusively important,” that it does not make logical sense for the Krishna consciousness movement to become sidelined into a movement for initial outreach and book distribution only. And highly decorated temples in major cities. We need more gurus. Not remote, world-travelling, highly qualified gurus, but locally accessible, less qualified gurus. Thousands of them.

By guru I mean someone who is prepared to personally roll up their sleeves and accept responsibility for the spiritual welfare of a number of named individuals. No wide broadcasting of messages; no generic teaching to anonymous masses; but teaching, guidance, support to named people in a local area. Only with thousands of men and women doing this will we be able to do what this great mission was set up to do.