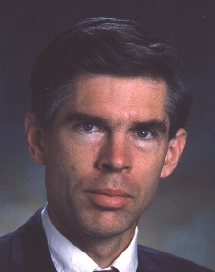 We are shocked and very sorry to hear of the sudden departure of Sriman Sadaputa dasa Adhikari (Dr. Richard L. Thompson).

His work in establishing Krishna consciousness through science was brilliant and effective. As a submissive disciple of His Divine Grace A.C. Bhaktivedanta Swami Prabhupada, Sadaputa Prabhu put aside all of his Western academics in favor of studying the Vedas and practicing their tenants. However, at the request of his spiritual master, he agreed to utilize his scientific education and sharp intellect for supplying supporting evidence to Vedic teachings. He ventured into many subjects-the soul, consciousness, the spiritual world, as well as refutations of commonly-held modern theories of evolution, the Big Bang Theory, etc.

It was Sadaputa Prabhu who fearlessly led many attacks against the godless myths in the form of so-called science. His writing and speaking were so eloquent that no one could defeat him. Once in 1984, we invited Sadaputa Prabhu to speak at the prestigious Eindhoven University in the Netherlands (home to many Phillips Corporation scientists). The topic of the lecture was “Consciousness,” and the audience was made up entirely of science professors, including the chancellor of the university, a reputed scientist himself. Sadaputa Prabhu used a slide show demonstration and explained each slide thoroughly. He presented a convincing argument in favor of consciousness being a component of a living being rather than an outcome of material interactions.

The audience was in rapt attention and quiet until the questions and answers period afterward. These professors contemplated every word he said and they were determined to dismantle his arguments. They asked questions like, “Dr. Thompson, are you familiar with the work done by such and such scientist in the field of such and such?” Everyone was amazed at how Sadaputa Prabhu knew all about every subject that was asked. Not only that but he was able to synthesize and critique the work under discussion in light of the superior Vedic conclusions.

By the time the questions were over, the audience was spellbound. The best of scientists were unable to find any holes in his presentationithey became completely silent. Following the discussion, a wondrous prasadam feast was served and everyone honored it with gusto. Several professors, including the chancellor, stayed on longer and asked Sadaputa Prabhu questions of a more personal nature. One question was, “Dr. Thompson, how should we deal with the question of evil.” Sadaputa Prabhu answered all the submissive inquiries to their full satisfaction. That was one of the most striking preaching engagements I have ever witnessed.

Sadaputa’s work of debunking Darwin’s Theory of Evolution will go down as one of the history’s greatest acts of scholarship and kindness to a misguided civilization. Seeing him featured on NBC television’s The Mysterious Origins of Man, hosted by Charlton Heston, was exhilarating beyond description.

In the 1970’s Sadaputa and I spent many an hour together discussing a preaching strategy-a traveling Vedic planetarium in a tent. We envisioned taking it to universities all over America. I hope that dream of ours can still take place.

Sadaputa had the unique ability to explain extremely complex scientific subjects in a manner that most moderately-educated laymen could understand. Sadaputa was our movement’s big artillery. When doubtful questions arose from new bhaktas, we sent them to Sadaputa. When science challenged the faith of the devotees, Sadaputa answered and answered with scientific authority as well as Vedic knowledge. Armed with transcendental knowledge and firm faith in guru and Krsna, Sadaputa was invincible.

That powerful preacher has departed and we are very, very sorry that we will no longer be able to see him thrashing the demoniac speculators, providing us inspiring insights into understanding the Vedas and fulfilling the desires of Srila Prabhupada with expertise. After the departure of Srila Prabhupada, Sadaputa served thirty years as a vital resource for discerning Vedic and Western sciences.

Sadaputa Prabhu, we thank you with great sincerity for being there when it was most needed.

Your servant and friend,
Danavir Goswami