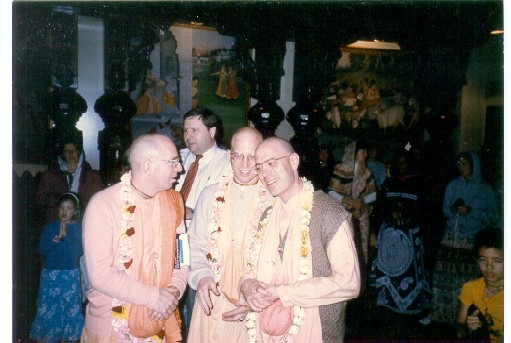 It is with great regret that we have to acknowledge the passing of another senior member of ISKCON, Sriman Sundararupa prabhu. Husband of Sudharma dasi he had lived in Alachua FL for many years. He had a history of heart problems and about ten years ago had a heart valve replacement. Then again this year he had to undergo a repeat of the same operation. Unfortunately his health problems continued and he was hospitalized a few days ago and put on life support. At around 8.00 PM on Saturday September 20 he departed.

I am glad I had one last opportunity to see him. On June 7 2008 I was visiting Alachua and I sent the following email to my wife Sitala:

”Yaduabara and I drove up from Alachua yesterday to Atlanta. It was pretty smooth going and took five hours. Before we left we went to see Sundararupa, who had just gotten out of hospital after an open-heart surgery to replace a major heart valve. He was happy to see us even though we couldn’t spend more than 15 mins. because we were running late. He showed us his scar which ran from his throat down to his gut. The doctors literally take a power saw and cut right through the rib cage, pull it apart and pin it back and then do the replacement. Its pretty traumatic for the body but as Sundararupa told us, its like going to sleep and waking up with a new body. You go in with intense chest pains, breathlessness and thinking you could die at any moment, and you wake up with normal functions, albeit with some operational trauma to get over, but the heart works normally and you feel like you have been given a new body. ”

Sundararupa told us at that meeting that his previous heart valve was artificial and only had a limited life span. This new one was real and would “last the rest of this life.” An ironic observation to say the least.

Sitala had replied my email:

“Glad to hear you took the time to visit Sundararupa. What a heavy operation to go through. I  remember years ago, he was told by an astrologer that he would die fairly young (can’t remember the prediction) due to heart failure. Maybe his karma was minimized by Krsna.”

Through a competent astrologer it is possible to know how long we can expect our lifespan will be, but our actual life span is in the hands of Krsna:

”The Supreme Lord is situated in everyone’s heart, O Arjuna, and is directing the wanderings of all living entities, who are seated as on a machine, made of the material energy.”

In the general scheme of things according to the Lord’s sweet will and in response to our own desires and activities, we move from one situation to the next. But for a devotee, there is nothing inauspicious nor is the movement of a devotee dictated by karma. It is directly arranged by Krsna Himself.

There is no doubt therefore that Sundararupa prabhu has moved to a most auspicious destination. When he left his body he was surrounded by devotees chanting the holy names. Krsna was therefore personally present and there is no doubt that He has rewarded his servant for his many years of dedicated service.

As proof that devotees are always in the direct care of the Lord, I recall an interesting story Sundararupa told me many years ago. In the early 80s, Sundararupa was in charge of our operations in Italy. He would also go to Israel to preach. On December 27 1985 he and several other devotees (maybe as many as seven) were standing in line at the Israeli airline EL AL ticket counter waiting to check in. The line was moving slowly and somehow or other, for different reasons, every single one of the devotees wandered off, leaving their luggage in the line. While they were away, disaster struck:

(from BBC ’On this day’ news service)

At least 16 people have been killed and more than 100 injured during simultaneous twin terrorist attacks at Rome and Vienna airports.Gunmen opened fire on passengers queuing to check-in luggage at departure desks for Israel’s national airline, El Al.

The attacks were indiscriminate and started within minutes of each other at about 0815 GMT today.

No group has yet admitted carrying out the attacks.

At least 13 people were killed, three of them gunmen, after six men, described by witnesses as being of Arab origin, fired bullets at travellers waiting in the main departure hall at Rome’s international airport.

Chaos broke out during what is reported to have been a five minute attack as passengers fell to the floor for cover.

Italian police returned fire as bullets rang out across the concourse leaving a trail of blood and broken glass.

Two gunmen, in their twenties and of Arab origin, were captured alive.

One of them was taken to a military hospital for surgery and a third attacker is said to have escaped.

In similar scenes in neighbouring Austria, three gun men threw four hand grenades into crowds of passengers queuing to check-in for a flight to Tel Aviv.

It is understood they then pulled out Kalashnikov submachine guns as Austrian police returned fire.

They escaped by car but were pursued by police who opened fire.

One of the men is reported dead, the other two were severely wounded and eventually surrendered to police.

It comes amid reports airport authorities received warnings Arab militant groups were planning a pre-Christmas terrorist campaign at terminals across the world.

El Al counter after the attack

In all, the attacks, which were carried out by notorious terrorist group Abu Nidal, killed 18, including a child, and wounded around 140. Yet none of our devotees were harmed. I remember Sundararupa telling me that he had to dive for cover as bullets flew around and explosions rocked the air.

Sundararupa prabhu has now been taken by Krsna to a new destination. We sincerly wish this dedicated servant of Srila Prabhupada an all-auspicious life in the service of the lotus feet of the Lord and His pure devotees and offer our heartfelt condolences to his wife and children. 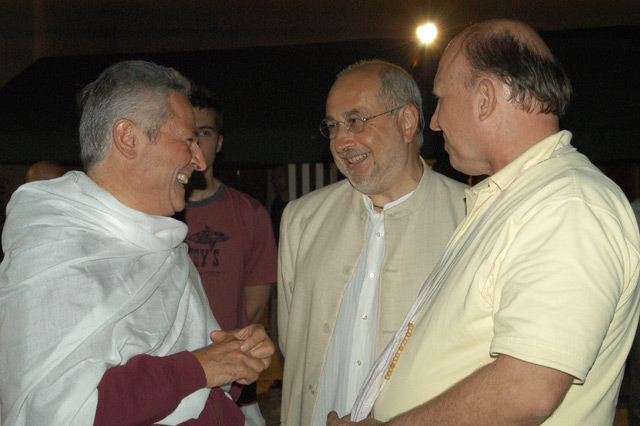 Madhudvisa Prabhu: A Letter in Separation