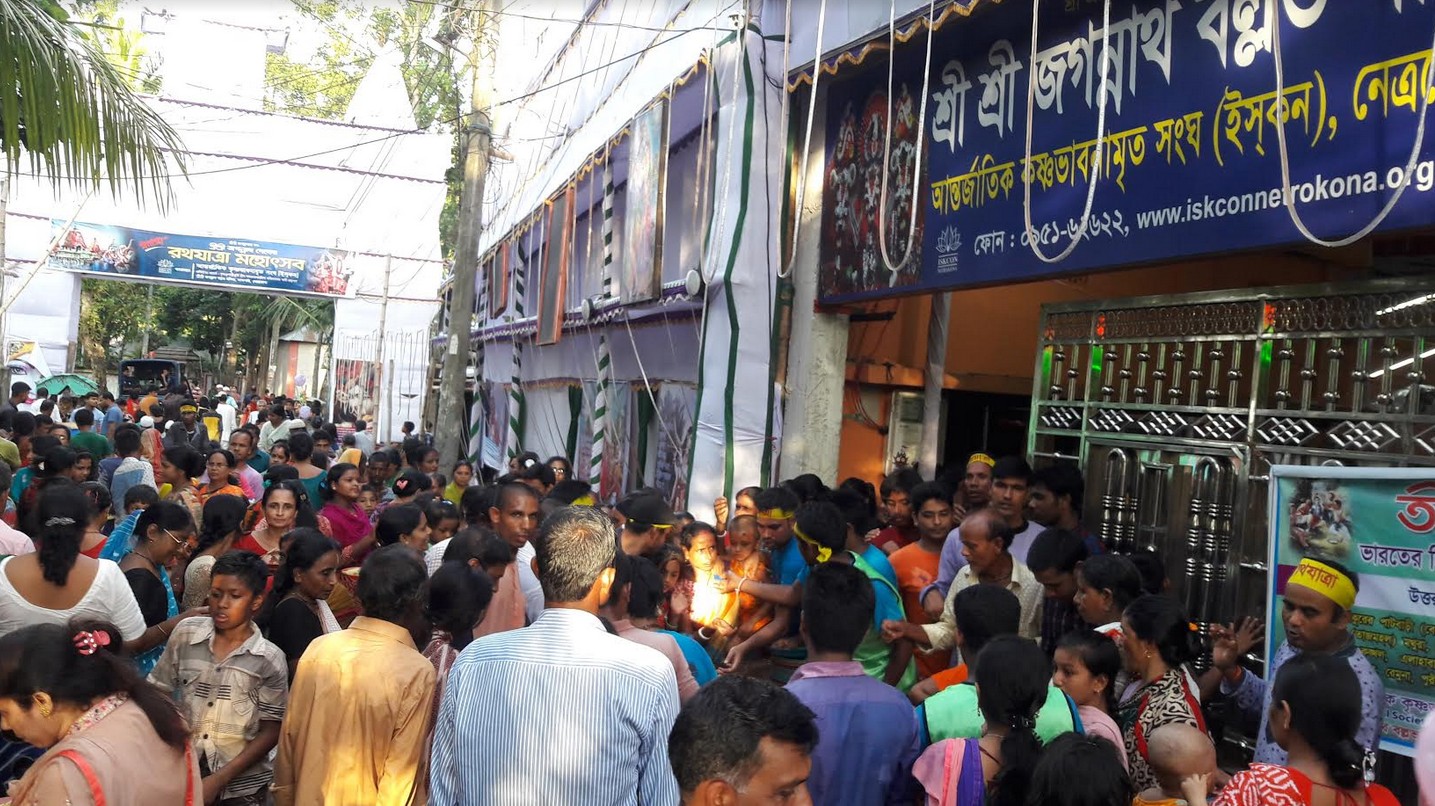 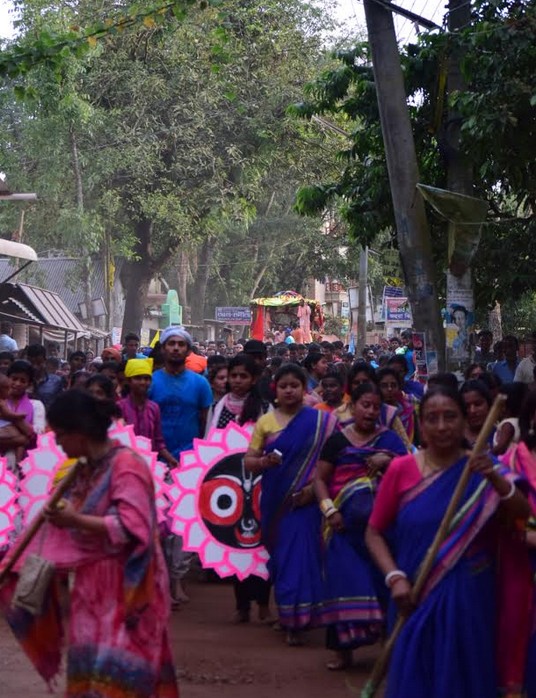 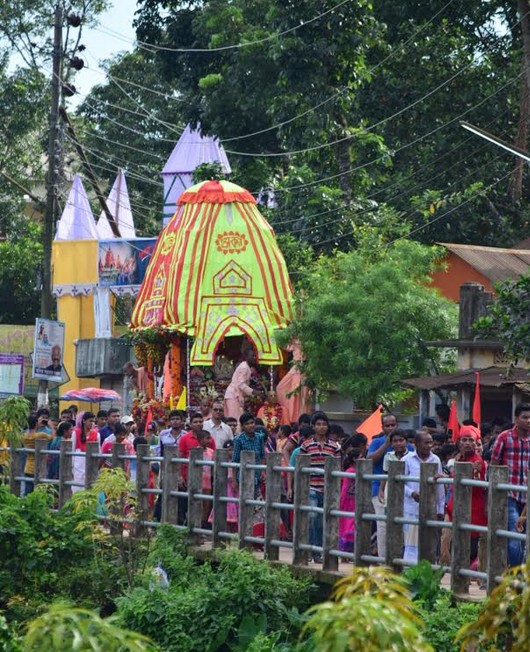 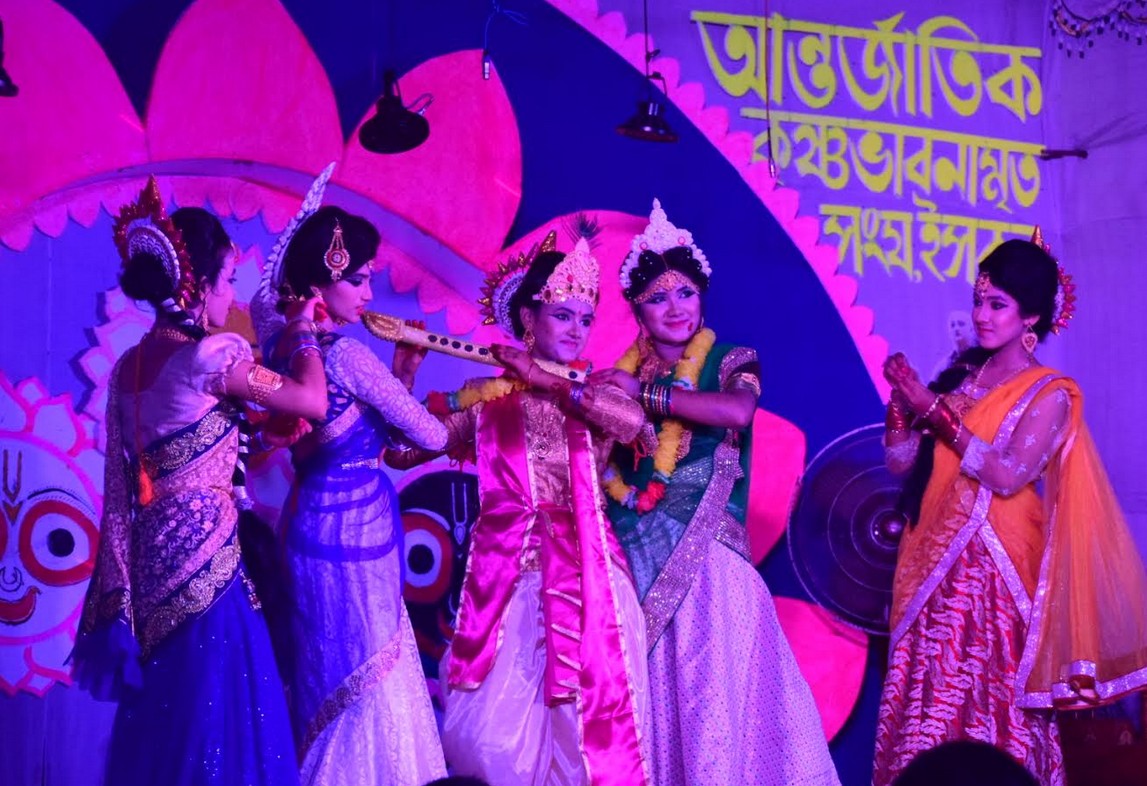 With over ten thousand people taking part, this year was the biggest ever Ratha Yatra held at Netrakona, Bangladesh. Jagannath ballav Temple, ISKCON Netrakona celebrated its 8th Jagannath Ratha Yatra festival from the 14th till 22th of July with grand success.. Around 8 years back this centre started with only three brahmacharis- Jayram Das, Tulsi Das and Anantadev Das, simply distributing Srila Prabhupada books. No facilities for accommodation, practically going hungry at times having nothing to eat or surviving for days on puffed rice and boiled potatoes. By their hard work and their firm faith in Srila Prabhupada words and strict adherence to the instructions of their Spiritual Master Srila Subhag Swami Maharaj , today the Jagannath ballav temple has over 35 enthusiastic brahmacharis serving full time, a moderate temple hall with a sitting capacity of 100 or more, a kitchen that can serve more than ten thousand plates of maha prasadam at a time last but not the least, a contingent of sincere and simple hearted devotees which keeps the very temple bubbling with life, In the beganing of this year year the temple opened Govindas restaurant and jai Nrishma Sweets.

All activities, words, everything should be offered as a service to the Deities, and this offering wit remembering will gradually increase as you practice it.’ (SPL to Prajapati das, 16th May, 1976)

“This is very good proposal. Make the Ratha-yatra festival very great success. This will be a great introduction in your city and people will appreciate it” (SPL to Syamasundara, 4th May, 1967)

On the day of the festival,six fire sacrifices were performed in order to invoke auspiciousness. Once the fire sacrifices had finished, there were a series of speeches by various VIPs. The chief guest of the event was the Senior Pujari & Mayapur Academy teacher; His Grace Shyamsundarannada das Bramhachari, General Manager Mayapur; HG Krishna vijaya das, Netrakona District Chairman ; Prasanta Kumar Ray. Other distinguished guests were Head police officer ; Jayadev Chowdary and additional district commissioner mohamad Ariful Islam and Nirmal kumar Das. All the VIPs glorified the efforts of ISKCON Netrakona in trying to spread the glories of Lord Jagannath.

After coconuts were broken, conches blown and an arati ceremony performed the chariots got moving. The District Chairman was given the privilege of pulling the Lord’s chariot first. After this Their Lordship’s made Their way through the main roads of Netrakona accompanied by melodious kirtans. The final destination was a local Hindu temple where Jagannath along with His siblings will take rest for the next nine days. Prasad was then distributed to a crowd of 10000.

During these nine days, there are a series of cultural programs, lectures, dramas and kirtans which take place back at ISKCON Netrakona.

I am so much satisfied with your successful performance of Ratha-yatra festival and I am awaiting to see similar festivals in all our other centers….” (SPL to Gurudasa, 16th July, 1968)

We thank all the devotees of Netrakona for holding such a great festival for the Lords pleasure. Especially we would like to thank HG Jayram das, Anantadeva das and Tulsi das, the leaders of ISKCON Netrakona, who worked tirelessly day and night alongside the brahmacaris at ISKCON Netrakona for the festival to take place. Last but not least; we would like to thank all other devotees who came from different places in order to make the
festival a success.

Journey that gave ISCKON to the world completes 50 years

ISKCON Prison Ministry An Hare Krsna from the Hindu Tribe

Travel Adventures of a Krishna Monk