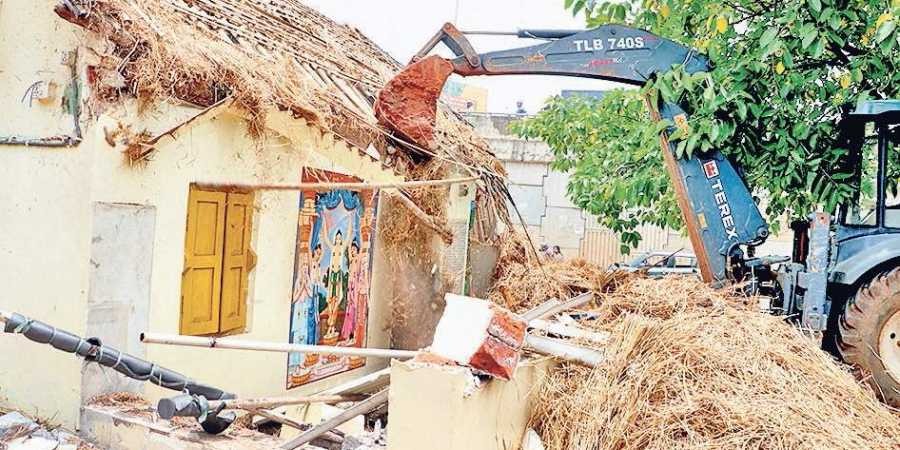 Hare Krishna, Kindly accept our humble dandvat pranam. All glories to Srila Prabhupada. You may be already aware of the fact that the NHAI have already acquired some very prime portion of land in front of ISKCON for expansion of NH-16 on which our Gurudev’s Samadhi and Srila Prabhupada’s Bhajan Kutir stand in a thatched cottage since the establishment of ISKCON Bhubaneswar.

We have not yet received any compensation from the NHAI and a case is pending in the High Court of Odisha in this regard.

In order to solve the massive rainwater logging the Govt. of Odisha have decided to construct an underground drain from CRPF square to Vani Vihar via ISKCON and Jayadev Vihar. For this purpose, the Bhubaneswar Municipal Co-operation (BMC) issued a show cause notice to ISKCON for eviction of the Samadhi and Srila Prabhupada Bhajan Kutir on 26/07/2018, describing the land being encroached by ISKCON. In order to face the present crisis, we had an urgent meeting of the Temple Management Committee and senior devotees. We had met the Mayor and some other Govt. dignitaries in order to save Srila Prabhupada’s Bhajan & Gurudev’s Samadhi.

Today, all on a sudden, they demolished the Samadhi Mandir & Bhajan Kutir of Srila Prabhupada. Even the eviction squad of BDA and BMC did not give time for sparing the Samadhi. At last, they evicted the altars. Of course, we have shifted the Sri Vigrahas of Srila Gurudev & Srila Prabhupada. The devotees are mourning for such eviction. This is for your kind information. Kindly give us courage and solace to bear the present crisis facing ISKCON Bhubaneswar.

Yours in the service of

Bhakti Charu Swami: The devotees of Bhuvaneswar are making a 7 feet square metal box to carry the remains of Srila Gaura Govinda Maharaja’s body in the ‘samadhi’
along with the soils surrounding it and place the entire box under his ‘puspa samadhi’ mandir that already exists next to the temple.

I am present in every living entity as the Supersoul
Kulimela Radhadesh 2018 day 3 (Album of photos) Srila...