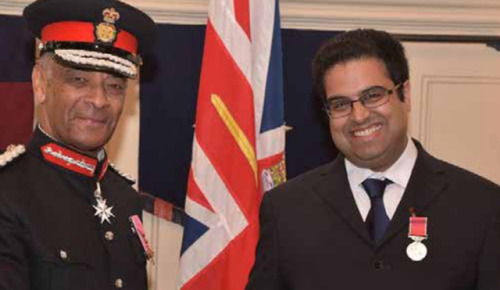 Devotee awarded British Empire Medal.
Acyuta Charan das, based in South London, manages a vegetarian food charity for homeless people, and was awarded a British Empire Medal (BEM) in the New Year’s Honours list. The award category was for voluntary and charitable services to homeless people in the area. For ten years he has been heading up food distribution for the charity Food For Life while also working as a Home Office accountant at Lunar House in Croydon. “I wasn’t expecting it at all!” responded Acyuta, “We serve all meals from a pop-up table and if it’s raining we operate from a van. I just get on with my service; I don’t expect to be nominated for awards. The Medal was presented to Acyuta at Tower Hill, Central London, by the Lord Lieutenant of Greater London, Mr Ken Olisa OBE.

CHAKRA INSTALLATION IN MAYAPUR (Album with photos) One of the…