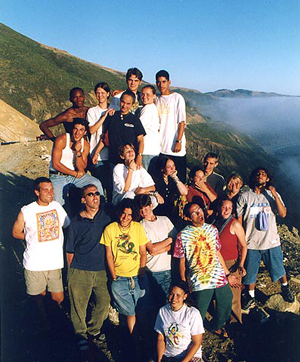 Some of you may have heard of the Vaisnava Youth Tour. Every summer around sixty Vaisnava youth tour the United States, Canada, and Mexico.

For many years Manu Prabhu, the Minister of Youth, has been asking me to join the tour and try to involve the youth in book distribution. I never had the time or the courage to take up the offer. But this summer I had the time and I built up the courage. There are 22 boys living in a bus 26 feet long, for two months — very austere. The girls have 37 in their bus.

At many of the cities we go to there is a devotee who promotes the festival, called “The Yoga of Love.” The youth perform a drama called “Big Fish, Little Fish,” and of course there is the Bharata Natyam dancing and lots of kirtan.

I joined the tour in Toronto, shortly after we went to a town called Thunder Bay, in Canada. This was our best turn-out so far. The morning before this program, I gave a book distribution seminar to try to inspire them to try it. One hundred and seventy Canadians showed up for the festival, which they paid for, and were very amazed. They came out of the auditorium so happy that it was very easy for them to purchase Prabhupada’s books. While I was distributing, a Vaisnava youth called Bhakti-lata-bija Mataji came to the table to give it a try. She showed the Bhagavad-gita to one lady, and the lady was so inspired after Bhakti’s presentation that she enthusiastically gave a donation and took the Gita.

Bhakti was in ecstasy. It was the first Bhagavad-gita she had ever distributed. She was glowing and said, “I feel high!”

One of the things I mentioned in the seminar is that book distribution is fun, and this confirmed it.

Diary of a Traveling Preacher - "The Will of the People"
Searching for Truth in a Forest of Misinformation: A Comment on the Recent Discussions