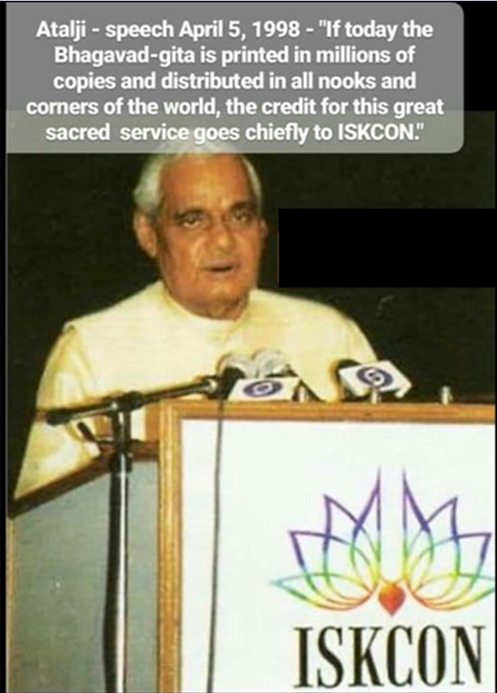 For the benefit of my friends from abroad, I would like to say a few words in English:

Distinguished guests, it is my privilege to be present at today’s pious function to mark the opening of this magnificent temple and also the Glory of India Vedic Cultural Center in Delhi. The piousness of today’s function is further enhanced by the fact that it is taking place on the auspicious occasion of Rama Navami.

I would first of all like to express my deepest sense of appreciation for the vision, dedication, and achievement of the International Society for Krsna Consciousness (ISKCON) and all those who have collaborated with it to present this unique spiritual gift to the nation’s capital. The ISKCON movement has few parallels in the world in terms of its rapid global spread, its trans-national, trans-ethnic, and trans-professional appeal, its outward simplicity, and the devotional energy of its followers. In the less than three and a half decades since its inception it has established temples in practically all parts of the world, and many of them are marvels of beauty, such as the one that is being opened in New Delhi today.

If today the Bhagavad-gita is printed in millions of copies in scores of Indian languages and distributed in all nooks and corners of the world, the credit for this great sacred service goes chiefly to ISKCON.

I understand that ISKCON is also propagating the message of the Gita through the latest gadgets of information technology, and this temple itself provides an astonishing demonstration of the use of high tech to popularize the higher truth of life and the universe.

For this one accomplishment alone, Indians should be eternally grateful to the devoted spiritual army of Swami Prabhupada’s followers. The voyage of Bhaktivedanta Swami Prabhupada to the United States in 1965 and the spectacular popularity his movement gained in a very short spell of twelve years must be regarded as one of the greatest spiritual events of the century.

What accounts for the rapid spread of the ISKCON movement globally?

The answer should be sought in two factors—internal and external. The external factor was, in my opinion, the disillusionment in the leading minds in Western countries arising out of the domination of the materialist ideology and culture in the West. Both capitalism and communism gave birth to disillusionment, since both are essentially materialist ideologies that are incapable of satisfying the real needs of man. Young, sensitive, and searching minds could not have reconciled themselves to the reality of wars, violence, greed, excessive consumerism, and degradation of the human and natural environment. They had to seek answers elsewhere, and ISKCON was one movement where they found the answer.

The internal factor was, of course, the inherent strength of ISKCON’s message, a message founded in the philosophy of the Gita. It answers all the moral concerns and needs of the world, be it man’s quest for inner peace, his need for belonging to the rest of the human and natural community, his concern for the environment, his attitude towards work and attitude towards death. The Gita provides comprehensive and internally consistent answers to all these concerns.

It is in this respect that ISKCON differs from other passing fads and fashions that appealed to the disillusioned Western minds in the 1960s and 70s. These fads come and go, but the ISKCON movement is growing from strength to strength.

The transcendental and universal message of the Bhagavad-gita is evocatively communicated by Bhaktivedanta Swami Prabhupada in his book Bhagavad-gita As It Is, and I would like to read the following excerpt from his introduction to the book:

“In this world men are not meant for quarreling like cats and dogs. Men must be intelligent to realize the importance of human life and refuse to act like ordinary animals. A human being should realize the aim of his life, and this direction is given in all Vedic literatures, and the essence is given in Bhagavad-gita. Vedic literature is meant for human beings, not for animals. Animals can kill other living animals, and there is no question of sin on their part, but if a man kills an animal for the satisfaction of his uncontrolled taste, he must be responsible for breaking the laws of nature. … If we properly utilize the instructions of Bhagavad-gita, then our whole life will become purified, and ultimately we will be able to reach the destination which is beyond this material sky.

“That destination is called the sanatana sky, the eternal, spiritual sky. In this material world, we find that everything is temporary. It comes into being, stays for some time, produces some by-products, dwindles, and then vanishes. That is the law of the material world, whether we use as an example this body, or a piece of fruit or anything. But beyond this temporary world there is another world of which we have information. That world consists of another nature, which is sanatana, eternal.”

In this distinguished gathering of spiritual masters and spiritual seekers I am indeed a layman. But permit me to share with you a few thoughts of mine on the relevance of the Gita’s message in today’s national and global contexts. The Gita’s relevance is universal and eternal because it provides a satisfactory answer to three basic questions of life: What are we? What should we do? And how should we live?

Human beings have confronted these questions in all societies at all times. The Gita answers these questions through the harmonization of jnana-yoga, karma-yoga, and bhakti-yoga. The beauty of Indian culture is that it made the essence of these three paths of yoga available to the lowest man as well as to the highest seeker. The Gita is not a prescription for non-action or passivity. It gives a radical message of action which transforms the self and the society. That is why it could inspire countless revolutionaries and freedom fighters, such as Mahatma Gandhi, Swami Vivekananda, Lokmanya Tilak, and others. But in times of peace and nation-building, the Gita can also inspire the politician, the teacher, the worker, the scientist, and the common citizen—and film actors also.*

*Film stars Sunil Dutt and Hema Malini were among the guests present in the audience.

A word about the architectural beauty of the new ISKCON temple. It is undoubtedly a worthy addition to New Delhi’s array of beautiful buildings and structures, both old and new, whose numbers, sadly, are far less than what the nation’s capital ought to have and whose collective beauty, even more sadly, is drowned under the sprawling and spreading sea of ugliness and ordinariness.

The spectacular look of this temple and its landscape reminds me of a telling quotation I came across in a newspaper yesterday. It is by the celebrated author Sri V. S. Naipaul, who commented on the paucity of beautiful modern buildings in India. Naipaul says, “Independent India has not produced architecture. Poor countries need very fine buildings to put people in touch with what is possible with the beautiful. Such fine buildings are the most public art.” Naipaul is right. We need more and more buildings which put our people in touch with our own tradition of beauty and aesthetics.

Naipaul may also be right in observing that beautiful buildings are the most public art. We cannot tolerate a situation where everything that is beautiful—beautiful paintings, beautiful beaches, beautiful mountain resorts, and beautiful works of art—is available only to those who have the money. A beautiful temple, of course, is more than a piece of public art. It puts people in touch with the higher beauty of the almighty creator and all His creation. The sights, sounds, and indeed all the vibrations in a temple have the effect of soothing the devotees, comforting them, giving them hope and confidence, and elevating them to a transcendental plane of existence, at least for the brief time we spend praying and worshiping in the temple.

May I once again felicitate all those who have had a hand in making this great dream come true—the acaryas of ISKCON, the generous donors, the architect, the landscape designers, the engineers, the workers, and all the other humble devotees. Thank you very much indeed.

The well known Shetty family gets blessings (Album with…