Milk from a Cow or Snake Prabhu? 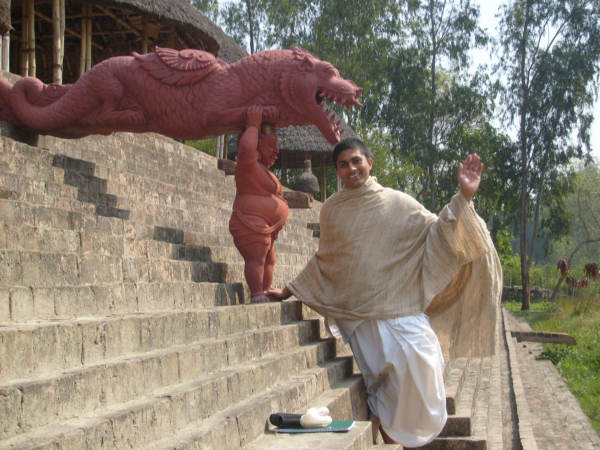 Bhakti Nilaya das: During our practice of our Krsna consciousness we are constantly hearing. This hearing can be clasified under two broad catorgories, i.e. Prajalpa and Krsna Katha. Prajalpa means everything we speak about but has no relation to the Supreme Lord or His devotees. Prajalpa is also an unfavorable activity to our Bhakti Lata Bija or creeper of devotion. This topic is very nicely described in the Caitanya Caritamrta. Krsna Katha is topics of the the Lord, His associates and His devotees and everything favorable to ones devotional life. The topics and issues that I will bring up are very broad and can be discussed very deeply and at length. I will humbly try to share with you what I know from my own realisation.

Ones advancement in spiritual life is dependent on hearing. One can become purified just by hearing. The perfect example of hearing is Maharaj Pariksit. Ones advancement is also dependent on what we speak. The perfect example that comes to mind is Sukadeva Goswami. We should try to develop Vasudeva Katha Rucih, a taste for hearing the topics of Sri Krsna. Both topics, Prajalpa and Krsna Katha can be compared to milk. Milk from a cow is benificial to all and is compared to been a nectar. Prajalpa and aparadha is compared to be like milk from a snake. It may perfectly decieve you into believing that it is just like the milk from a cow but dont be fooled, its effect is disasterous. It has a poisonous and deadly result which leads to destruction. Krsna Katha is like the nectar that Dhanvantari carried whilst prajalpa is like the poison that came out during the churning of the ocean.

Sometimes we are often bombarded with so many topics of discussion that seem so juicy, interesting and so irresistable to resist, that we, without fail we partake in these discussions.Usually these topics have no favorable effect on our spiritual life yet will still engage in hearing and speaking about it. It doesn’t mean that because the topic of discussion is a devotee then it is ok. If one is glorifying the Vaisnava, by all means broadcast it all over the world. But if one simply has nothing to do with his or her time and doesnt want to talk about Sri Krsna or glorify His dear devotees or even pick up their beads and chant, but rather engage in gossip or talk that ussualy defames or brings down an individual, should a devotee tolerate this or even entertain such topics and allow it to enter his ears and consciousness and thus create samskaras in his heart which will bind him further for countless more lifetimes?

Whilst in highschool I learnt one very important thing from my Afrikaans teacher. She always told us that if you hear something good about someone, tell everyone, and if you hear something bad tell no one. The tounge is the most veracious among all the senses. The Nectar of Instruction tells us of controlling the urge to speak. With an uncontrolled tounge, there is no hope of bringing all other senses under control. Sometimes in life we want to say something and we feel that if we dont say it then the world is going to end. Words spoken can be compared to the Bramastra weapon, once invoked, it is practically impossible to take it back.

As aspiring devotees, we should try and develop the mood of loving exchanges amongst devotees and everyone for the matter. The devotees words and actions should not be like sharp arrows, piercing the hearts of all that he meets and hurting their feelings. By his word and conduct, he would rather capture the hearts of whoever he meets. He would never compramise the philosophy, but present it in such a way that the person would be attracted. A devotee is expert.

One of the root causes of gossip and aparadha is envy. We all have envy within our heart and by engaging in devotional service, chanting the Lords holy names, speaking and hearing favorable topics about the Lord and His devotees can we become purified from this anartha.

A devotee is never envious of anyone, even his enemy. Because the devotee knows that the Lord is his supreme protector, he thinks, “What harm can the so-called enemy do?” Thus a devotee is confident about his protection. The Lord says, ye yatha mam prapadyante tams tathaiva bhajamy aham: [Bg. 4.11] “According to the proportion of one’s surrender unto Me, I respond accordingly.” A devotee must therefore be completely free from envy, especially of other devotees. To envy other devotees is a great offense, a vaisnava-aparadha. A devotee who constantly engages in hearing and chanting (sravana-kirtana) is certainly freed from the disease of envy, and thus he becomes eligible to go back home, back to Godhead.

We have to realise that our every action has an effect on someone. It is said in the Quoran that he is not a believer until he wishes for his neighbor what he wishes for himself. A similar phrase is found in the Bible, Do unto others as you would have them do unto you. I am sure that we wouldnt like to hear of people, what to speak of devotees, speaking ill of us behind our backs. I am sure that we wouldnt appreciate anyone defaming us and we may sometimes act with anger upon defending ourselves. I am sure that we wouldnt be at all any it inspired to hear us been brought down because of a previous mistake or falldown. So why then is it ok for us to do it to someone else?

We have seen so many devotees come and many have left due to aparadha and prajalpa. They took shelter of the Lord and His dear devotees but due to our actions we caused them to leave. Krsna is so pleased when we bring forward a jiva to offer at His lotus feet. He feels so indebted to the devotee for this service, just as a father would be for brining home his lost son. How would Krsna feel if, by our actions, a jiva was hurt and repelled from ISKCON?

Who are we to point a finger at anyone? The fact remains that we are in the material world becuse of our false ego, we rebelled against the Supreme Lord. We may see some apparent fault in the devotee due to us been sinful and why should we criticise him for it? A devotee is compassionate and will try to help him to their best. The fact that we see the faults in others simply means that we have them in our heart. When we point a finger at somone, we can go on and on telling them what a rascal they are and how much in maya that they are in but we fail to realise that although we are pointing one finger at them, three fingers are enthusiastically pointing back at us. In a sense it would be so funny to go to a prison house and see a group of inmates criticising all the other inmates for been criminals when they themselves are in the prison house for been criminals. For countless lifetimes we have sinned. Whats the use of telling everyone about a drowning man when we have no sincere intention of saving him or even throwing him a life jacket?We are just speaking for the sensation. How would you or the devotee concerned or the entire yatra benifit from hearing about his faults? When one is criticised, the reaction that he was meant to suffer for that fault is transfered unto the person that is criticising him and he is releaved from all reaction. But when a devotee is gloified, that good quality enters your heart and you develop that good quality.

Srila Prabhupada was so compassionate. He knew of many devotees falldowns and mistakes but he never criticised that devotee but rather helped that devotee. He even gave devotees sannyasa twice! He cried when a devotee left. I am not bringing any propergangda up by the above statements but would simply like to show the magnamamous nature of Prabhupada. He tried very hard to get those that left back. He had real love and care for the devotees. I pray that I may also imbibe his mood. Let us try to treasure, love and sincerely care for all the devotees within our society. If each one of us sincerely tries to do this then no one would even think of leaving. We can unite Srila Prabhupadas family in this mood.

My intention is not to sound heavy and pure but express the feelings within my heart, which I know is bound to many corrections, but I also know that it can help us become stonger, both as devotees aswell as loving brothers and sisters in this wonderful society that Srila Prabhupada has kindly created for us. Those that have not realised that they are devotees will be attracted to join us in this process. If you have gooten this far in reading my article, I humbly beg you to forgive me if I have committed any offences.

Let us stop buying milk from the snake that has harmed us for far too long. Let us relish that milk which is just like nectar and full of nutrients for our spiritual life. Let us consume that milk that can elevation from our continued degredation. What would you like to buy prabhu?

Kazakhstan saga is nearing an unfavorable conclusion
Is the Sky Really Falling?

Did You See Your Doctor?

How to Practice the Art of Forgiveness