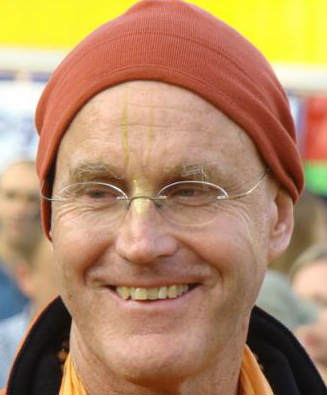 As we were driving through beautiful forests on our way out of the Republic of Adegeya, a disciple turned to me. “Guru Maharaja,” he said, “there’s a man who lives nearby who is said to have amazing healing powers. You often mention that your liver is not well. Would you like to see him?”

“I don’t believe in such things,” I said.

“But he’s cured many people,” said the devotee. “I personally know several.”

“No, Guru Maharaja,” said the devotee, “he uses local herbs. He searches for them in the forests and mixes them in combinations that no one else can understand. He’s become so popular that Russia’s Deputy Minister of Health was sent to investigate him. She concluded that he is either a mystic or an alien because his formulas are impossible to reproduce.”

“That’s exactly why I don’t want to waste time seeing him,” I said. “It’s all hocus-pocus.”

Another devotee spoke. “Local doctors call him when they can’t determine someone’s illness,” he said. “Every day he goes to hospitals in the region, advising doctors and patients.”

“I must admit,” said Vaikuntha-pati das sheepishly, “I’ve been to him, and he has helped me.”

“Did he?” I said with a touch of sarcasm.

“Guru Maharaja,” said Vaikuntha-pati, “there’s no harm in visiting him. I can arrange an appointment now. Usually it takes up to a year. He’s that popular. Maybe he can help you.”

“My problem is not that serious,” I said.

“Any illness left unattended can become serious,” he said.

Finally I relented. “All right,” I said. “We can stop by for a few minutes, but no longer. We still have a four-hour drive ahead to the Russian-yatra festival tonight.”

Vaikuntha-pati called the healer and made an appointment for an hour later. Our driver changed direction, and we turned onto a winding road that took us through rolling hills and misty valleys. Colorful flowers dotted the green landscape, and small streams crisscrossed our path.

We reached a small settlement of rustic cottages on the outskirts of a town. As we pulled up next to a cottage, I saw a disabled man come out. He walked with difficultly towards our car and gestured to us to follow him inside.

“He must be one of the patients,” I said to Uttama-sloka das.

As we entered the cottage, I turned my head behind to Vaikuntha-pati. “Don’t tell the healer anything about me,” I said. “I want to see if he can find out what’s wrong with me by himself.”

“Nobody tells him their problems,” said Vaikuntha-pati.

As we sat in the musty living room filled with antique Russian furniture, I wondered whether the healer would be able to diagnose my sore liver, the three problematic vertebrae in my neck, my weak knees, and my occasional headaches. And last year a doctor told me my blood pressure was high.

Lost in thought, I was surprised when the disabled man entered the room and sat down in a chair facing me. I turned to Uttama-sloka. “Ask this gentleman if the healer has helped him,” I said.

Before Uttama-sloka could say anything, the man took my hands in his and closed his eyes.

“What in the world is going on?” I said to Vaikuntha-pati.

The man opened his eyes. “Your blood pressure is slightly high,” he said.

He closed his eyes again and clasped my hands tighter. “And three vertebrae in your neck are damaged from when you were hit by a car.”

“Maharaja,” whispered a devotee sitting nearby, “you were never in a car accident.”

The healer continued. “Your liver is slightly swollen,” he said, “you get headaches from time to time, and your knees are weak, especially the left one.”

I was speechless. After a few moments I regained my composure. “Sir,” I said, “how do you know all that?”

He looked across the room at an icon of the Virgin Mary holding baby Jesus. “By the grace of God,” he said. “I can also tell you your liver is weak because you had hepatitis many years ago. You have to be careful what you eat. But don’t worry about the Alzheimer’s disease that runs in your family. It won’t affect you.”

My jaw dropped. My grandmother died of Alzheimer’s years ago. I sometimes wondered whether I would suffer the same fate.

“There’s nothing serious,” he said, “but you have to take care. With natural herbs you can be cured. Herbs are God’s gift to man in the form of medicine.”

“I cured myself with herbs,” he continued. “I was born with severe paralysis. When I was eight years old I asked my grandmother to go into the forest and bring back certain herbs. I tried many different combinations, and eventually they worked. According to the doctors, I was supposed to be bedridden my entire life.

“Some people say I’m a warlock, but look at that diploma on the wall. I have a pharmaceutical degree. If I’m unconventional it’s only because I sometimes use toxic herbs in small doses to stimulate the body into action. But the result is that I have cured more than 3,000 patients of cancer.”

That raised my eyebrows.

“It’s not a fairy tale,” he said. “When the hospitals give up on cancer patients, they send them to me as a last resort. I’m not always successful because I’m not God, but I’ve found His herbs to be the most effective cure for disease. My record for helping women who cannot conceive children is much higher.”

I was writing furiously in my notebook.

“What are you doing?” he asked.

“He keeps a diary, which he publishes,” said a devotee.

“Promise me you won’t tell anyone where to find me,” he said. “I won’t consult a single person who might come here as a result of your visit. I’m here for my own people. The indigenous herbs are most effective on the local population. Anyway, I can’t possibly help more people than I’m currently seeing. And who outside of this town will believe what you write about me?”

“They may believe in the benefit of natural medicine,” I said, “but I’m also wondering how in the world you knew what was wrong with me just by holding my hands.”

“That’s another thing,” he said. “I spent 12 years in Tibet studying medicine with Buddhist lamas in their monasteries.”

He handed me a glass of water. “Drink this,” he said, “and your liver will feel better soon.”

I drank the water.

He looked at me intensely. “You people are doing the most important work of all,” he said. “You’re curing souls. If you take care of yourself, you’ll live another 20 years.”

He stood up. “There are many patients waiting,” he said.

As we left the cottage, we were all silent. Some time later, while we were driving, a devotee spoke. “What do you think Maharaja?” he said. “Was it all hocus-pocus?”

I thought for a few moments. “Well,” I said, “he has a medical degree, and it appears he has helped many people. And who can argue that herbs are a natural way to cure people?”

“And what about your liver?” he asked.

I clutched my right side. Suddenly I realized that the dull pain in my liver had subsided for the first time in many months.

In the Ramayana there is a passage about the power of herbs:

“Hanuman plunged his hands into the side of the mountain and broke off the entire section containing all the herbs. Lifting the huge mountain summit above his head he soared high into the sky and soon arrived near Lanka.

“Vibhishana rushed over and embraced the monkey. The Raksasa then set about finding the medicinal herbs, perceiving them by virtue of his occult vision.

“Taking a handful of the herbs Hanuman went quickly to Rama and Laksman. He looked anxiously at the two princes, who appeared like the sun and the moon fallen to earth. His hand shook as he placed a bunch of herbs under Rama’s nostrils.

“Slowly, the prince began to stir. He breathed deeply, inhaling the celestial fragrance. Gradually His eyes opened. He looked up at Hanuman and smiled. The monkey breathed a deep sigh of relief. Quickly he began administering the herbs to Laksman. Slowly, He too returned to consciousness.

“The surviving monkeys moved swiftly among the wounded troops, administering the herbs to them. They crushed the herbs and allowed the wind to carry the pungent fragrance.

“By the potency of the healing herbs hundreds of thousands of the Vanara warriors were restored to consciousness and they jumped up shouting with joy. Even some monkeys who had been killed, but whose bodies were not destroyed, were brought back to life by the herbs’ potency. Soon the monkey army stood again in their millions, ready and eager for the fight.”