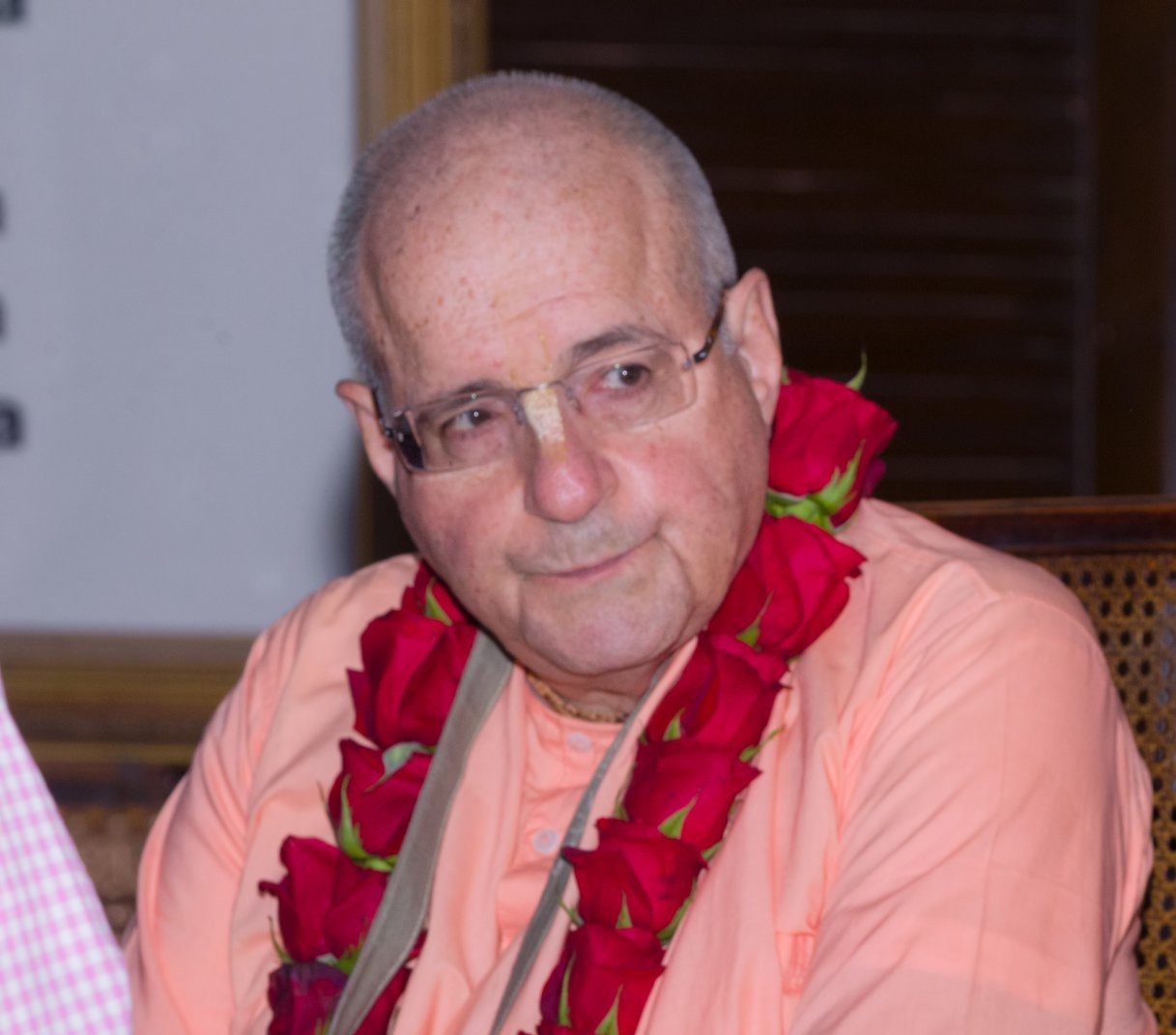 When Srila Prabhupada was coming to America on the Jaladuta steamship, as he was nearing Commonwealth Pier in Boston, he prayed to Krishna, “All living entities have come under the control of the illusory energy by Your will, and therefore, if You like, by Your will they can also be released from the clutches of illusion. I wish that You may deliver them.

“I wish that You may deliver them. Therefore, if You so desire their deliverance, then only will they be able to understand Your message.”

Srila Visvanatha Cakravarti Thakura has discussed how the conditioned souls get bhakti. With evidence from the scriptures, he proves that one cannot get bhakti by karma or jnana, fruitive activities or mental speculation, or by austerities, charity, mystic perfections, or any other pious acts. He quotes from Srimad-Bhagavatam (11.3.31), bhaktya sanjataya bhaktya: bhakti comes from bhakti. But how does bhakti come from bhakti? What is the actual process?

He says that someone may propose that one gets bhakti by the mercy of Krishna. But Krishna is equal to all. He is the supreme father of all living entities, so He must be equal to all. So we cannot simply say that the cause of bhakti is the mercy of Krishna, because Krishna would bestow bhakti equally on everyone, whereas practically we see that some get bhakti while others do not. Then Visvanatha Cakravarti Thakura says, “One could propose that one gets bhakti by the mercy of the devotee.” But again one might argue that the devotee, like the Lord, should be equal to everyone.

Here Srila Visvanatha Cakravarti Thakura says that the preacher, the madhyama-bhakta, by nature shows partiality or discretion in distributing mercy. As stated in Srimad-Bhagavatam (11.2.46): prema-maitri-krpopeksa yah karoti sa madhyama—he gives his love to the Supreme Personality of Godhead, makes friendship with devotees, shows mercy to the innocent, and neglects the envious. Thus, giving mercy, specifically to the innocent, is the preacher’s function. Even though, in the ultimate sense, a maha-bhagavata such as Srila Prabhupada sees everyone equally, everyone as a servant of Krishna and therefore in no need of mercy, when he takes the position of a preacher and functions as a preacher, he gives mercy to the innocent. How does he give the mercy? He prays to Krishna to give mercy, and thus it is said that the mercy of Krishna follows the mercy of the devotee.

Here I have my own personal experience: I met Srila Prabhupada in 1969 in Boston, and I was touched by him. I felt that he was the spiritual master for whom I had been looking. About three months later, the devotees there needed another pujari. In those days one could be a pujari after first initiation. They thought, “He has been here for three months; why not recommend him?” So Satsvarupa Maharaja, as the temple president, recommended me in a letter to Srila Prabhupada.

Srila Prabhupada was in Los Angeles at the time, so I suppose in one sense I was actually initiated there. Srila Prabhupada wrote back, “Your initiated name is Giriraj. Giriraj is a name for Govardhana Hill, where Krishna used to tend His cows. Sometimes devotees take a stone from Govardhana Hill and worship it as Krishna. So I marked it in your person when I was in Boston, and I prayed to Krishna that this good soul may be aware of the importance of Krishna consciousness.”

What is our qualification? When I look for my qualifications, I don’t find any. Our only qualification is that Srila Prabhupada took compassion on us and gave us his mercy: he prayed to Krishna for us, just as he says in his prayer approaching the Commonwealth Pier.

So, back to Srila Visvanatha Cakravarti Thakura’s discussion: Someone could question, “Why should Krishna listen to the prayers of a devotee? So many people are praying to Krishna; why should Krishna listen especially to a devotee? Is that not also partiality?” Visvanatha Cakravarti Thakura says that of all of Krishna’s qualities, the quality of being affectionate to His devotees, bhakta-vatsalya, is considered the supermost, the emperor that conquers over all the Lord’s other qualities and reconciles all contradictions. So, being partial to His devotees is not a fault (dusanam) in Krishna, but an ornament (bhusanam)—His most exalted quality. He has no desire other than to please His devotees. Just as the devotees have no desire other than to please Krishna, Krishna has no desire other than to please them.

So, when a devotee such as Srila Prabhupada prays to Krishna to give mercy to the fallen souls, or to a particular soul, Krishna readily does it. He does it to please His devotee.

Years after my initiation, I found the verses that Srila Prabhupada paraphrased here in verses 6 and 7 of “The Prayers of the Personified Vedas” from Srimad-Bhagavatam (10.87.14). The personified Vedas prayed to the Lord, “The fallen souls are under the control of maya, and maya is under Your control. Therefore, if you show them Your mercy, they can be released from the control of maya. We pray that You kindly do so.”

The same verse was quoted by Sri Chaitanya Mahaprabhu to Vasudeva Datta. Vasudeva Datta had prayed, “Let all the sinful reactions of all the living entities in the entire universe fall upon me,” and Lord Chaitanya became overwhelmed with love for Vasudeva Datta and began to tremble and weep out of affection for him.

We don’t want to take anyone’s sinful reactions. Just our own sinful reactions are hard enough to tolerate. Yet here Vasudeva Datta is saying that he will take the reactions for every living entity in the whole universe. We cannot even conceive of how much suffering he would have to undergo, but he offered, “Let me suffer in a hellish condition perpetually.” And he spoke without duplicity. Sometimes we may say things to sound good, to say the right thing, to sound like an advanced devotee. But Vasudeva Datta was serious. Thus, when Sri Chaitanya Mahaprabhu heard what he said, His heart melted and He told Vasudeva Datta, “You need not suffer their sinful reactions. They can be liberated by your desire alone. Krishna fulfills the desires of His pure devotees. So by your desire He can liberate them without your accepting their sinful reactions.”

Sri Chaitanya Mahaprabhu quoted the same verse from “The Prayers of the Personified Vedas”: “O Lord, kindly conquer the nescience of the living entities by Your grace.”

So, from one point of view, this is the secret: In his sincere love and compassion, and in his intimate relationship with Krishna, Srila Prabhupada prayed for us, and Krishna reciprocated.

But again, what is the method by which we get the mercy? Srila Prabhupada wrote, “So I prayed to Krishna that this soul may be aware of the importance of Krishna consciousness.” In other words, we must become aware of the value of Krishna consciousness and then take to the process that Srila Prabhupada gave us. Thus we come to the second part of Verse 7: “If You so desire their deliverance, then only will they be able to understand Your message.”

Many people heard Srila Prabhupada’s message, or Krishna’s message, but not all developed faith in it. The beginning of bhakti is faith (adau sraddha). Thus, when we ask how one gets bhakti, we really mean how one gets sraddha, which is bhakti in its initial stage.

Preparing For The Final Exam
Fear, coronavirus and detachment