The ISKCON Deity Worship Ministry (IDWM) acts on behalf of the GBC to ensure that the worship in our temples and centres is done according to the standards as given by Srila Prabhupada. It also provides training for devotees interested in developing their skills and abilities as Pujaris and brahmanas. The Ministry is also presently compiling ‘position papers’ that address often asked questions related to worship. By closely studying and researching Srila Prabhupada’s books, conversations and letters as well as speaking to various senior devotees it aims to give devotees clear direction and guidance on the common questions asked. For example two of these questions are ‘can we show Radharanis feet on festivals like Radhastami and Gopastami? Can non brahmanas assist in the Abhisekas during festivals? Other questions range from the use of white sugar in cooking, changing the form of the deity, worship of demigods, worship of Dvaraka silas etc. In all the IDWM is presently working on over 20 position papers. 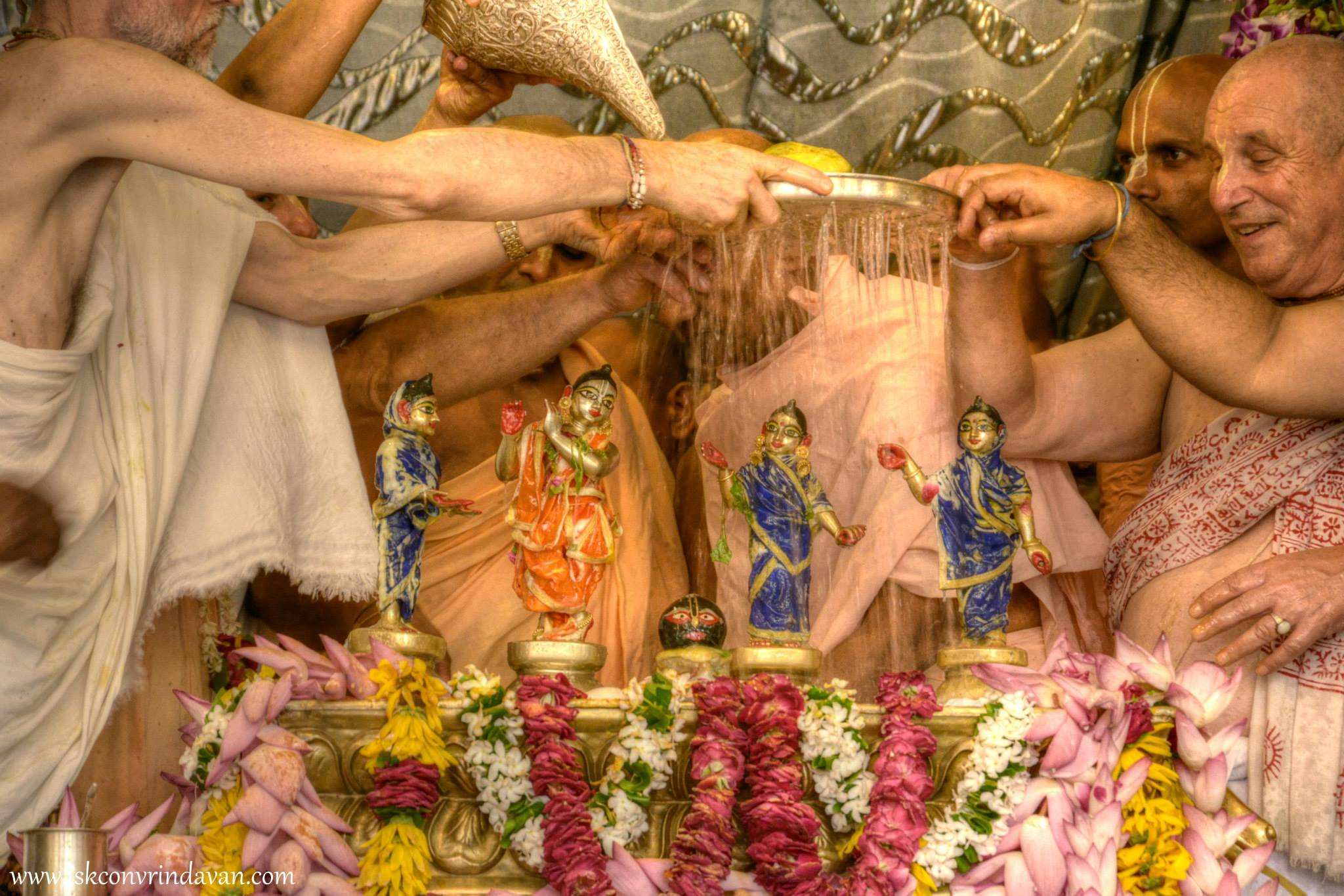 Abhisekas in ISKCON centers may only be performed by suitably qualified brahmanas according to the same pancaratrika standards as Srila Prabhupada established for daily temple worship.

The only exception, per Srila Prabhupada’s instructions, is bathing Jagannatha, Baladeva and Subhadra annually for Snana Yatra.

This applies to any deity in an ISKCON center, whether the understanding of some may be that the deities are installed or not. Temple worship standards apply in the temple; not that home worship standards are appropriate to be observed in ISKCON temples.

“Devotional service of the Lord that ignores the authorized Vedic literatures like the Upaniṣads, Purāṇas and Nārada-pañcarātra is simply an unnecessary disturbance in society.”

Only suitably qualified devotees may bathe, touch, or worship deities in ISKCON centers. The appropriate qualification includes following the four regulative principles, chanting at least 16 rounds daily, having received pancaratrika gayatri diksa within the Gaudiya sampradaya, and following appropriate dress and cleanliness standards in preparation for performing any worship.

The focus must be on serving and pleasing the deities, not personal satisfaction.

The notion of liberally distributing the mercy by allowing everyone to bathe is not supported by guru, sadhu, and sastra. Lord Caitanya’s process was freely giving the holy name.

Indeed, the arca-vigraha is the mercy form of the Lord and the way the Lord reciprocates with us depends on our qualification. Those who are not brahmana-initiated receive the Lord’s mercy through darsana, honoring remnants, etc. However, only one who has received the qualification of pancaratrika gayatri diksa can receive the Lord’s mercy by touching, bathing, and worshiping the Lord.

Suggestions on How to Engage Non-brahmanas

If temples wish to generate income via kalash sponsors who are not qualified for offering direct deity worship in ISKCON temples per Srila Prabhupada’s and sastric instructions, then the following procedure is recommended:

*** The principle is that the sponsor is being given the special opportunity to be engaged as a direct and active assistant to the qualified pujari(s)—as a servant of the servant of Their Lordships being worshiped.

SB 11.27.8: Now please listen faithfully as I explain exactly how a person who has achieved twice-born status through the relevant Vedic prescriptions should worship Me with devotion.

SB 11.27.9: A twice-born person should worship Me, his worshipable Lord, without duplicity, offering appropriate paraphernalia in loving devotion to My Deity form or to a form of Me appearing upon the ground, in fire, in the sun, in water or within the worshiper’s own heart.

SB 11.27.10: One should first purify his body by cleansing his teeth and bathing. Then one should perform a second cleansing by smearing the body with earth and chanting both Vedic and tantric mantras.

In our Krsna consciousness society, unless one is twice initiated – first by chanting Hare Krsna and second by the Gayatri mantra – he is not allowed to enter the kitchen or Deity room to execute duties.

Last night I have given comments that Madhavendra Puri, he was performing the Annakuta ceremony and installing the Deity. So everything was being brahmana, done by brahmana, qualified brahmana, but Madhavendra Puri initiated them again to become Vaisnava. Then he gave them in charge of the Deity worship. So the Vaisnava functions cannot be done even by a brahmana.

You should see that the Deity is tended for and cooked for only by the duly second initiated brahmanas.

The pancaratriki-vidhi… Just like we are introducing in this temple for worshiping Deity, but actually the Deity can be worshiped by the bona fide brahmanas.

Regarding the exact date for celebration of Rathayatra Festival, it is on the 5th July until the return journey of Lord Jagannatha on the 14th July. Before Rathayatra, on June 19, there is a ceremony of bathing Lord Jagannatha after which Lord Jagannatha falls sick with fever from too much bathing. Then He takes rest and no one is allowed to visit, but He reappears on Rathayatra day.*

*This ceremony you can observe by bathing a small deity on the day participated by all devotees. But there is no need of closing the temple for fifteen days. ACB

We shall touch the Deity altar and Deity in very clean condition, after taking bath and washing mouth nicely.

Foolish people think that devotional service is flattering the Lord to get special mercy. Factually the pure devotees who are engaged in the transcendental loving service of the Lord are not a mercantile community. A mercantile house renders service to someone in exchange for something valuable. The pure devotee does not render service unto the Lord for such exchange, and therefore the full mercy of the Lord is open for him.