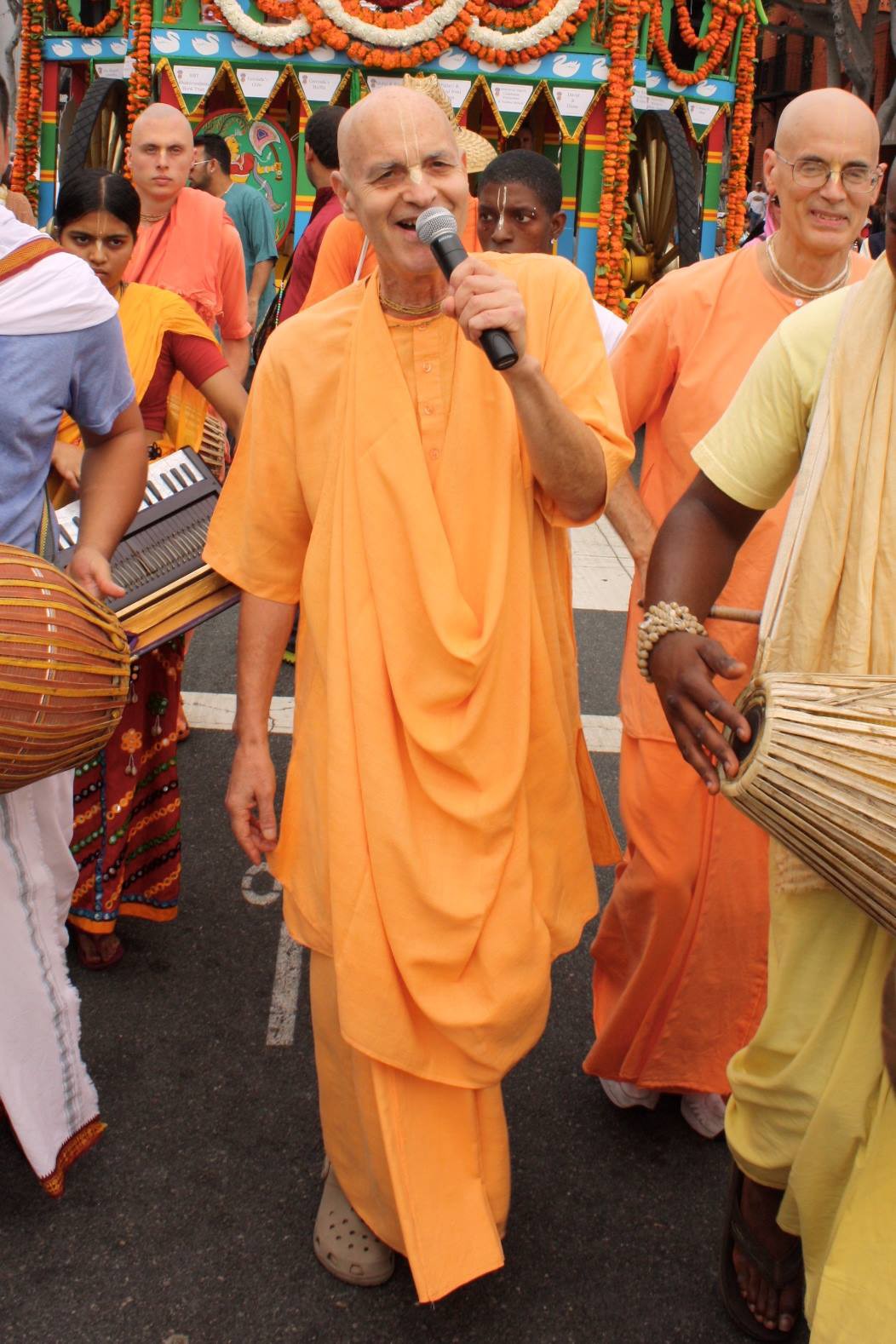 Please accept my loving obeisances at your lotus feet. All glories to Srila Prabhupada.

You have always been most kind and a dear friend to me and so many others. When we met in 1978 you had established the beautiful San Diego temple and were transitioning to being the bhakta leader so you could concentrate on recruiting and training new devotees there. As I had the same service in Los Angeles, we naturally began visiting and calling each other regularly to compare notes. During those turbulent days in ISKCON following Srila Prabhupada’s departure you were a calming presence in my life, unwavering in your focus on spreading Krishna Consciousness in fresh and innovative ways.

A couple of years later you bought a medium-sized motor home and christened it the “Vaikuntha Rath.” You made regular preaching excursions to areas with no temples where you found and cultivated interested new people. Sometimes you invited me along. You were always jolly, joking about life on the motor home, from innovative cooking techniques on the tiny stove to creative ways of dealing with waste water which you called “Rath broth.” Your presence made the simple life very blissful. As we drove you would scan hitchhikers and stop to pick up promising candidates for introducing to Krishna consciousness. It seemed your taste for introducing people to Krishna had no limit. Even in the early ’80s when ISKCON was sliding into some chaos you found peace in preaching and serving on the road and generously shared it with other devotees.

A few years later we again worked together in Houston helping Tamal Krsna Maharaj locate a new temple. We found three possibilities. Your choice was a vacant nightclub with apartments above in the busy, youth-filled Westheimer area. I was inclined to a yoga compound near Rice University. Tamal Krishna Maharaja had a vision for developing Houston’s Indian community, so we secured an empty Baptist church that is the location of the temple today. As a householder I stayed on to manage the temple while you pursued your sannyas dharma by going to Korea as a Krishna consciousness pioneer.

Several years later you came to visit Vancouver where I was serving as temple president. You asked me to drive you to Saranagati one day, so we spent eight hours together in the car reminiscing and discussing everything on our minds. You were a good listener and, as always, a calming and inspiring influence. I think it was then that you belted out your new version of an old blues ballad: “If you ever/ change your mind/ about leaving Krishna behind….”

Our next encounter was at the struggling Potomac temple. The GBC had asked me to serve as temple president and the situation was bleak. Meanwhile your Vaikuntha Rath program had grown into a full sized Krishnafest bus and a preaching team. You kindly based in Potomac for months bringing life and joy to the yatra by going out to the National Mall for kirtan and book distribution each day. You would pick up the mrdanga and set a groove for mangal arati, and then carry the same bouncy groove out to the Mall with your amplified drum machine.

After that our services took us apart. When we occasionally met you were as warm and loving as an elder brother. Sometimes you would call me out of the blue and ask advice about this or that, and I was arrogant enough to give it. At our last meeting in Houston you hinted about your health condition but didn’t let on how serious it was. In our last phone call you seemed to be in almost unbearable pain. Though we’d been apart you said we were ‘always connected.’ Now, after your glorious passing, you are in the spiritual world and I am here shedding tears and praying that connection will remain intact. Kindly continue to calm and inspire me to preach and once again pull me toward Srila Prabhupada and Lord Krishna.

A Tribute To Yamuna Devi Dasi

My meeting with HG Aindra Prabhu…