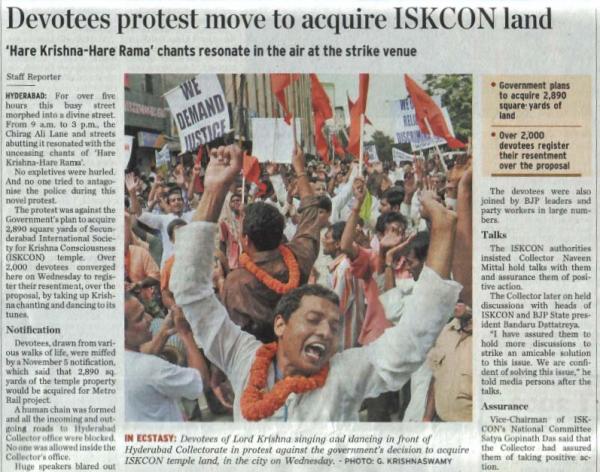 In order to turn the twin cities of Secunderabad and Hyderabad overnight into a London or Newyork, the zealous Andhra Pradesh Government invoked Land Acquisition Act on ISKCON Secunderabad Temple on 5th Novemeber affecting the temple and most of its land. This was done to widen the main street on which ISKCON Secunderabad temple is situated. We pleaded with the Government to revoke the order but our pleas fell on deaf ears. The Government and officials even refused to meet with the devotees, let alone revoke the order. Shockingly and surprisingly, other religious structures on the same stretch never received any demolition notice. To make the matters worse, the unmannerly officials even came inside the temple to measure it (of course they were duly chased out).

Completely cornered, the devotees of the twin cities, Secunderabad and Hyderabad decided to go public. Massive propaganda all over the city was arranged and in no time all many Hindu groups and political parties came on board. Indian Opposition leader, Mr L.K.Advani, who had come to the city for a few hours to address a rally, met the devotees, leaving aside all his engagements. A press conference was called to announce the launch of statewide ‘Save The Temple Movement’. The media sprung into action and soon it was an ‘issue’. At the conference, the 19th of November was announced as the date for a massive demonstration to highlight the government’s gross insensitivity, injustice and discrimination.

On the D-day, at 9.30am sharp, three thousand chanters came to the Collector’s office. The crowd included devotees from ISKCON Hyderabad, Secunderabad, Rajamundry, Anantpur, Tirupati and hindu sympathizers. Andhra Pradesh ISKCON leaders like HG.Vedanta Caitanya das, HG.Satyagopinath Das, HG.Srivatsa Das, HG.Mahasrnga Das were present and put in their best efforts. Who’s who of hindu organizations and politicians were present with their full entourage. Hundreds of enthusiastic matajis and kids deserve special mention. The entire traffic came to standstill and the police cordoned off this main thoroughfare and the city froze…….for the next 7 hours.

What was planned to be a 1 hour affair turned into a 7 hour affair with the Government eventually backing down. The Collector told the police that he will not go to meet devotees but devotees were insistent that they will not go to his doorstep. Finally the Collector had to come to the devotees and he assured the devotees that he would not take any untoward step in this direction.
All the TV Channels telecast the demonstration live and the entire print media was present. Newspapers are filled with front page coverage. And the holy name reverberated in many millions of homes in India through television.

Prasadam and drinks were continuously distributed and even the police enjoyed the chanting and prasadam to their heart’s content. There were times when the kirtana was slowing down and the police would indicate with body language and hands, “keep going man, keep going”! Newspapers are splashed with photos of both Hindu and political leaders (which include MLAs and MPs) putting on tilaka, dancing with karatals and taking lunch prasadam sitting down on the busiest thoroughfare of the city.

To conclude, the Andhra Pradesh Government’s attempt to seize ISKCON land seems to have been averted or at least postponed for an indefinite period but still we have to watch out and I request the worldwide community of devotees to stay tuned in and lend us sympathy and support as and when needed to protect Srila Prabhupada’s temple. Devotees here are determined to never ever take such a move against Srila Prabhupada’s movement lying down.