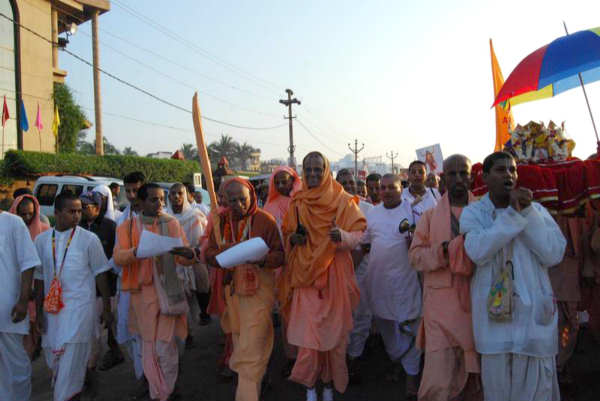 Despite the tense situation in Puri following the incident of burning of effigy of Srila Prabhupada, ISKCON Sri Kshetra Parikrama was a grand success with 6000 devotees participating in the parikrama. The entire three days program was full of bliss without any disturbances and it was peaceful. Please read the following report on Puri parikrama and have a blissful watching of videos and pictures!

Around 6000 devotees walked on Parikrama in Sri Kshetra dhama on the day prescribed in the Sastras (Pancami tithi).Devotees assembled at Nilachala beachfront early in the morning, pronounced their sankalpa to perform Puri Parikrama for good health of HH Jayapataka Swami. With Gaura-Nitai deities and Sankirtan party in the forefront, HH Loknatha Swami, HH Bhakti Purusottama Swami, HH Gauranga Prem Swami led the Parikrama. Parikrama party passed through Chakra Tirtha, Lokanatha temple, Narendra Sarovara, Indradyumna Sarovara and many other holy places. This year we had a non-stop Parikrama halting only for breakfast. So, we could finish Parikrama a little earlier than previous year around 1 p.m. When the parikrama reached again the seafront, the ecstasy doubled as devotees joyfully walked along the beach soothing their feet with cool waters.Parikrama ended with sea bath and feast. Harinam Kirtan by Shastra Prabhu and Krsnadas Kaviraja Prabhu was remarkable through out the parikrama. Especially on the second day, we had an ecstatic kirtan and dancing in front of Sri Jagannatha temple.

Devotees arrived in Puri dham on 15th November. It was raining heavily on 15th and 16th but from 17th onwards, we had Harinam rain for the next two days. Devotees had some doubts regarding the situation in Puri but the parikrama was very peaceful without any disturbances. On 17th, we visited Haridas Thakurs’a Samadhi and Tota Gopinath temple. We all chanted few rounds for HH Jayapataka Maharaja there. Bhadracharu Prabhu put up two great drama shows in Parikrama-one at Tota Gopinath temple and one at Jagannatha Vallabha garden. Drama was in Bengali as parikrama group was mainly Orrisa and Bengali devotees with few international devotees. Meeting of King Prataparudra with Sri Caitanya Mahaprabhu drama was excellent show and when I turned around, I could see some matajis eyes filled with tears. We have uploaded a separate video of this drama.

In the evening, we visited Gambhira and Siddha Bakula. Mahaparabhu stayed in Gambira for 18 years and Sri Sri Radha-Radha Kanta deities in Gambira were worshipped personally by Sri Caitanya Mahaprabhu.

On 17th, while performing Jagannatha temple Parikrama, devotees visited Bhakti Siddhanta Saraswati Thakura’s birth place, Narendra Sarovara and Jagannath Vallabh garden. This garden was full of flowering creepers and variety of trees (Bhakti Purusottama Maharaja read the whole list) and it is the place where Mahaprabhu took rest after dancing in the Ratha Yatra. On the advice of Sarvabhauma Bhattacarya, King Prataparudra dressed asVaisnava massaged the lotus feet of Mahaprabhu and recited Gopika gita prayers from 10th canto. On hearing this, Mahaprabhu went into ecstasy and embraced Prataparudra. Rightly on this time, HH Lokanath Swami arrived and drenched everyone in beautiful melody of Gopika Gitam. HH Subhag Swami expressed that he was very happy to see the increasing number of devotees attending parikrama in Puri Dhama.

Parikrama organizers had worked hard to facilitate the stay and prasada for such a huge number of devotees.