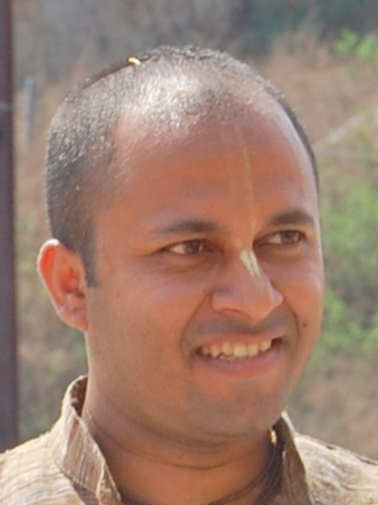 Krishna consciousness is the alchemy that transmutes a fool to an intelligent being. It is a proven fact that anyone who comes in contact with Krishna consciousness movement becomes “chatur” or intelligent. As one realizes the self, which is not this body, but the transcendental spirit that is beyond death and destruction, one moves towards intelligence.

When more and more people join this movement and come to this realization, the number of intelligent people is set to grow. They will become self-realized and naturally enough, come gradually out of the hold of general vices like greed, lust, anger, fear, ego, and enviousness. Their bodily requirements will get very limited. They will always be satisfied and happy with whatever they have. They will have no moral turpitude, which would let others take advantage of them. They will be able to feel the happiness and rejoice every moment. The beauty of the Krishna consciousness movement lies in its simplicity. Just chant Hare Krishna, follow the regulative principles and be HAPPY. And, it is so evident. One just has to go to the temple and see how the devotees enjoy observing even the so called ‘austerities’ of 4-principles. How each one of them knows how to eke joy in singing kirtan, and how ecstatic they are as they dance everyday during the kirtan? Interestingly, they do not have to go to a pub or pay entry fee and then get pseudo and temporary happiness on certain days. Their happiness comes for free, everyday, every moment, and independent of external bearings.

One man’s elixir, other’s poison. This wonderful experience might be a solution which a devotee would like to share with all the people around, but that very fact may give sleepless nights to the political leaders. These ‘leaders’, who thrive on taking advantage of people’s misery would lose their prop of survival. The material problems, suffering, troubles and general distress that provide them with an agenda to approach people for election will be gone. Moments of misery translate to a chance for an opportunist, what will they do without that? They will turn redundant.

ISKCON, Kazakhstan, 2006: Devotees were severely beaten and thrown out of the temple premises and the temple was demolished by the order of the government officials…

The political leaders of the present age are the embodiment of the spirit of kaliyuga as given in the scriptures – dwarfed spirituality, blunted intelligence, sycophancy, and belligerence. In their fight for survival, they will naturally target ISKCON that spreads Krishna consciousness, striving hard to churn out an anxiety free society that is happy and healthy. No wonder, with the progression of age the attacks on the movement have become more and more blatant and acerbic. Earlier it was confined to the countries outside India, but now the depravity has made its inroad within the citadel of spirituality. We are living in a time when the country that once played the broadcaster of message of Krishna Consciousness to the world, has turned to one that is ordering for the demolition of its center. The Andhra Pradesh government’s decision to demolish the ISKCON temple on the pretext of road widening is an example of this predicament. If the authorities can change their decision to accommodate an artist’s discomfort in having a flyover built in front of her house or can make the road wind around other religious structures that appear right in the middle of the road, it is only logical to doubt their intention when they change the yardstick when approaching ISKCON. Besides, the argument of ‘wide social benefit’ (in the form of road) is meaningless if it comes at the price of wide social degeneration. It is like a having a beautiful body with no life.

As an intelligent member we should be prepared of more such assaults on the movement. Every such attack on the movement implies our success in offering serenity to anxiety-ridden society, for it is this success which has instilled fear in them.
However, despite all their attempts to crush the movement, in line with its lofty principles of love compassion for every living being, we welcome everybody with open arms to join and taste the elixir of life – the real joy – the real intelligence. Chant
Hare Krishna Hare Krishna Krishna Krishna Hare Hare
Hare Rama Hare Rama Rama Rama Hare Hare!!
And be happy.

In Her Own Handwriting
Inauguration of Varnasrama Media Productions

Knock of an uninvited guest

The Issue of the Proto-Indo-European Language

2 Comments to “ Alchemy of Krishna Consciousness”