The Eagle, The Fish & The Mystic Creatures in Bhakti 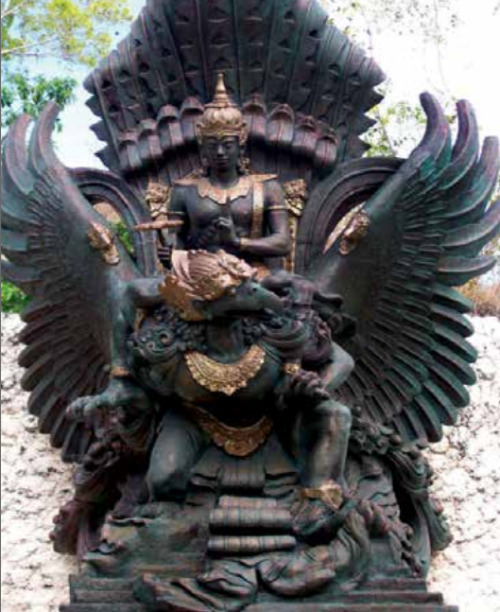 The Eagle, The Fish & The Mystic Creatures in Bhakti.
By Shaunaka Muni Das.
Is it a bird-like plane? No! Is it a bird-like Superman? No, not quite! It’s Garuda! The eagle carrier of Lord Vishnu! He is certainly not just any eagle but a gigantic golden eagle, a hero of considerable strength, and devotion to God. Garuda, the king of the birds, is entrusted with transporting God to wherever He wishes. Fantastic career path, wouldn’t you say? It is simply unheard of that such a species can be so dear to God, what to speak of saints celebrating him as one of God’s greatest servants and whose entire existence is devoted to pleasing the Lord. Although Garuda may eat fish and snakes, it is not for his personal enjoyment but for the primary purpose of maintaining his eagle body and enabling his devotional duties. Another of his intriguing attributes is the flapping of his gigantic wings that echo the Sama Veda.

This Veda draws attention to the devotional worship of God. Imagine Garuda’s constant emanating and hearing of such spiritual vibrations – how elevated his consciousness and position must be. Together with his unique position as God’s intimate servant and his fascinating services, he possesses pure humility. We often devalue this quality, seeing it as a weakness, but a story in Garuda’s life illustrates the spiritual depth in those who possess humility. Once the great sage Saubhari Muni lived within the rip prevailed river of the Yamuna. Because of his mystic perfection, he could exist in the water for as long as he desired, and over the course of time felt obliged to care for all the aquatics that lived there. Garuda would regularly feed there and the aquatics feared being eaten. Although there was no wrong on Garuda’s part, as eagles are supposed to live of aquatic life, the aquatics expressed their grief to the sage, who became enraged and took it upon himself to check Garuda.

One day he caught Garuda in the act of catching a fish and warned him never to eat there again. Garuda was famished, and although he wanted to heed the sage’s warning, he hastily caught the largest fish to subdue his hunger so that he could be on his way never to return. However, the sage was furious at Garuda’s apparent defiance and cursed the mighty eagle that if he ever ate another fish from that river, he would die on the spot. Vedic narrators explain that Garuda was a great soul who could have easily counter-cursed the sage, but out of humility he accepted the curse. On the contrary, the sage behaved passionately and impulsively, even though he was esteemed as a powerful mystic meant to be an expert in controlling the senses. Yet Garuda’s equanimity prevailed even at in a moment of intense provocation. In the book Krishna, Srila Prabhupada says that one’s greatness must be estimated by one’s ability to tolerate provoking situations. Garuda’s greatness was evident when he did not fall prey to retaliation whereas Saubhari Muni’s attitude and subsequent action was born out of pride, arrogance, and anger. In the Bhagavad-Gita (14.22–25), Krishna describes the symptoms of those who have transcended these modes of nature as undisturbed in all material encounters, and one who remains neutral and transcendental knowing well that the modes of nature are active. Krishna further explains that one who takes part in His service, with love and devotion, transcends the modes of nature and attains spiritual realization. Thus we see why Garuda had peace of mind and why the sage didn’t.

Bhakti Center: A Journey of Self-transformation!
Living with Srila Prabhupada
Tagged under: Nectar