Activating the Will of God 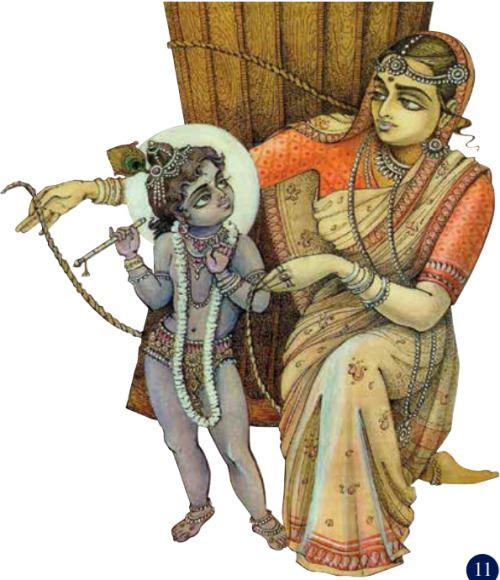 Activating the Will of God.
By Nikunja Vilasini Dasi.
How many of us hide behind the will of God as an excuse to inactivity or laziness? And how many of us attribute our successes to our efforts alone? The Vedic scriptures teach us that nothing in this world moves without the will of God—He is the creator, controller, overseer of multifarious universes, the benefactor of speech, intelligence, talent, and everything else without which we would be considered useless; however, do we just sit back, waiting for God’s will to save or direct us without endeavour, or do we activate His will? A pastime of Lord Krishna illustrates how both are needed: our sincere efforts and His will or divine mercy make our efforts successful. On one Diwali, more than five thousand years ago in Vrindavan, Krishna’s mother, Yashoda, discovered that Krishna had broken a yoghurt pot. Seeing little yoghurt footprints on the floor, she followed them to the courtyard and saw Krishna standing on a wooden grinding mortar, stretching upwards to butter pots hanging from the ceiling, His eyes darting around. He scooped out handfuls of butter and was feeding them to the monkeys. The monkeys ran away as Yashoda approached with stick in hand, ready to chastise Krishna. How many times had she excused His butter thievery antics. Now she wanted to teach Him a lesson. When Krishna saw the stick in her hand, He ran in fear. Yashoda ran after Him, and although it is impossible to catch the Supreme Lord, the conqueror of conquerors, the source of all energies, she was able to catch Him. Seeing His trembling lips and His fearful eyes pouring tears, Yashoda cast the stick aside and took a rope to tie Him to the grinding mortar, but it was two inches short. She gathered more rope and tried to bind Krishna again, and again it was two inches short. The gopis, the cowherd women, heard what was happening and brought many ropes to help Yashoda bind Krishna. But no matter how many hundreds of metres of rope they brought, it was always two inches too short. Krishna’s waist did not expand, neither did the rope shrink. By now Yashoda was panting, the flowers in her hair fell loose, and perspiration ran down her forehead; nothing could stop her. Krishna smiled, appreciating the intense efforts of his mother that proved her deep love for Him. Then the all-powerful Supreme Lord, who is the ultimate refuge of His devotees, allowed Himself to be bound by Yashoda’s pure love. From then on, Krishna became known as Damodara, the Lord who was tied by a rope around His belly.
This Damodara pastime illustrates that although God is never entangled in this mundane world, He is willing to bind Himself to anyone who approaches Him with pure love. When He sees us using our free will to come closer to Him and recognises our untiring efforts to persevere amid all hardships, He gives His will, His compassion and mercy, that makes the impossible possible. But if we just persevere without giving any credit or gratitude to His grace, even if we do succeed, we will miss out on His loving reciprocation. Every year the auspicious month of Kartik is celebrated, in which the pastime of binding Lord Damodara took place. However, in this month the Lord’s mercy does not flow in proportion to our endeavours; it pours a thousand times more. So, for every fear that we face, for every undesirable taint that we remove from our hearts, for every step we take towards enquiring about our life’s purpose, for every lamp we offer in devotion to the Lord, for every commitment we make to become more evolved spiritual beings, and for every hurdle we cross to keep the Lord’s message and instructions burning bright in our lives, His mercy will carry us a thousand times more. So next time you are tempted to take full credit for an accomplishment, imagine what your effort would be like without God’s gifts of life’s basic faculties. On the other hand, if you are on the brink of giving up and ask God, “Show me Your will,” imagine Him shouting back, “Show me yours!”