When Mother Lorrie visited her son, Jayapataka Swami, in Mayapur… 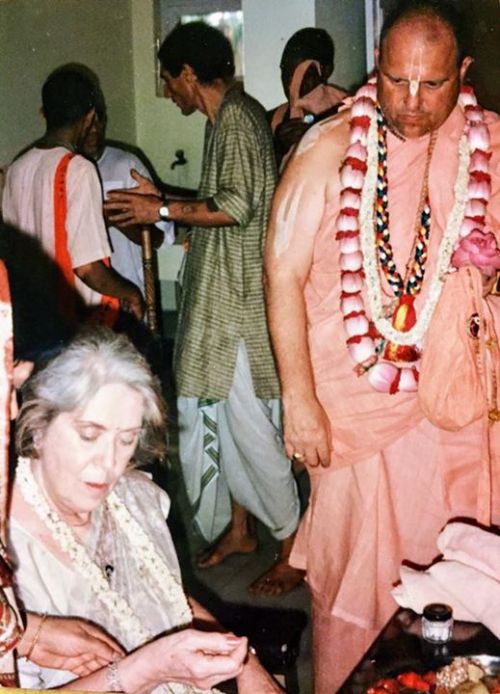 When Mother Lorrie visited her son, Jayapataka Swami in Mayapur
Haridhvani Devi Dasi: In 1995 I went to India and that year was the 25th anniversary of HH Jayapataka Swami taking sannyasa, so his mother actually came to Mayapur at festival time. I and a few other ladies got the chance to take care of her while she was there. We would try to see to her comforts- is she hot, is she thirsty, is she hungry, would she like to go shopping? It was nice because we figured that Maharaja would be pleased if she was happy and cared for so we did our best.
I remember that she wore either sari or gopi dress the whole time that she was there. She had been to Mayapur once before when Prabhupada was present and had two saris from that visit that she would use. One was with elephants and she said Maharaja had told her that when the trunk was up-raised, that pose was auspicious.
She was staying right near the temple in one of the guest houses, the Chakra Building, and Maharaja would come to see her every morning and take breakfast with her there in her room. Once when he came he had a special gift for her. It was an ankle bracelet from Srimati Radharani at the ISKCON temple in Vrindavan. I remember he touched it to her head before he handed it to her and then she asked what she should do with it, he said she could wear it on her wrist so Chudamani Mataji helped her put it on. She was so pleased. (The photo depicts this pastime.)
She had had a stroke some years before and so her son instructed her that she should go take bath in the Ganges and he told the ladies that were accompanying her to make sure that she put her head completely under. The aneurysm had been in a specific place towards the top of her head, so that place should be submerged. I wasn’t there when they took her but this is what I heard and they followed his instructions.
We were all so fortunate to get to serve Mother Lorrie and hopefully we pleased Maharaja in some small way.