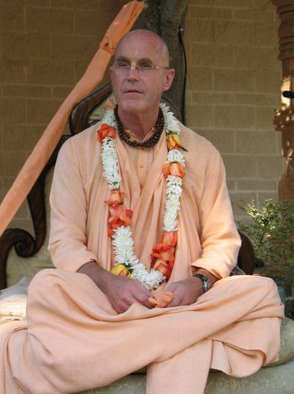 During the 1970s, I would get culture shock whenever I went to India. The crowded cities, the heat, the food, the occasional sickness, and the austerities of local travel would painfully remind me that I was a stranger in a foreign land. But as the years passed, my visits became more frequent and I began to feel at home there, especially in places like Vrindavan and Mayapur, where the Lord once performed His transcendental pastimes.

But this year, it was leaving India and going to Hong Kong that gave me culture shock. By modern thinking, I should feel at home in Hong Kong. It is as western a city as New York, London, or Paris, but I felt out of place before I even left the airport.

As Sri Prahlada and I passed through the glimmering halls of Immigration and Customs, I turned to him. “There’s only one reason to leave Vrindavan,” I said.

“To share one’s good fortune with others,” I said.

I felt uncomfortable until the next day when we went on harinama with fifty Chinese devotees. As soon as Sri Prahlada began leading kirtana with his accordion, I felt that I was back in Vrindavan.

I waved to him over the sound of the karatalas and mrdangas. “Hey!” I shouted. “It’s like we never left the dhama!”

But when we went back to our hotel, the modes of nature set in again. I lit some incense and candles on my altar and sat down to chant japa.

Still, it was odd. I had always been able to adjust quickly when coming back from India. I wondered if the problem this time was that the two months of parikrama in Vrindavan had been so deep and enriching that the contrast of Hong Kong was too intense.

Several days later we left for the Philippines. On the flight I picked up a newspaper and read about a report by the US National Intelligence Council. The report, a year in the making, was meant to brief the incoming administration of the new president, Barack Obama. It was entitled “Global Trends 2025 – A Transformed World,” and it gave dire predictions:

“The use of nuclear weapons will grow increasingly by 2025, forecasting a tense, unstable world shadowed by war.”

“The world of the near future will be subject to an increased likelihood of conflict over scarce resources, including food and water, and will be haunted by the persistence of rogue states and terrorist groups with greater access to nuclear weapons.”

“Widening gaps in birth rates and wealth-to-poverty ratios and the uneven impact of climate change could further exacerbate tensions.”

I leaned back and thought about what I had just read. “All this will make the challenge of staying Krsna conscious in the West even greater,” I said to myself.

That evening we went on harinama in Manila with more than a hundred devotees. I sweated in the humidity as we chanted past ramshackle buildings near the university. The streets were full of vendors, and there were crowds every inch of the way. Street children chanted and danced with us through the squalor.

“Watch your shoulder bag,” said a Filipino devotee as we stopped at an intersection. “These little street urchins will rob you blind.”

The harinama was as blissful as always, but as soon as it ended I found myself longing for the pure and sanctified atmosphere of the holy dhama, thousands of miles away.

I scolded myself. “This is not good,” I thought. “I have to make the change. The purpose of going to the dhama is to come back and preach in places like this.”

I revealed my mind to Sri Prahlada. “I’m still yearning to be home in Vrindavan,” I said.

Sri Prahlada smiled and quoted Advaita Acarya’s words to Lord Caitanya Mahaprabhu: “acarya kahe – tumi yahan, sei vrndavana.” (Wherever You are, My Lord – that is Vrindavan.)

After a week in Manila we flew to Sydney, where we joined twenty-six devotees from my European summer program. We were starting a two-month festival tour around Australia, and our first program would be in Terrigal, a small town outside Sydney.

But we were busy practicing and did not have much time for harinama, so I went to see Pratapana Dasa, our sponsor and festival organizer. “I’m in anxiety,” I told him. “We’ll only have time for one harinama to advertise the event. We may not get many people.”

“Don’t worry,” he said. “We’ve put up lots of posters and given out fliers in the markets. The town’s buzzing.”

The day before the program something terrible happened in India. I watched in shock on the Internet, along with many other people around the world, as a small group of Muslim terrorists attacked prominent locations in Mumbai, India’s financial capital.

The next afternoon I heard more about the horror of the attack. An e-mail came from Ashok Tiwari, an aspiring disciple in Mumbai. He is the stationmaster for Victoria Terminus, one of the places the terrorists hit.

Ashok told how he was just going to bed the night before when his terrified duty manager called from the station and said that two men with AK-47s were killing people. Ashok rushed to the station, several kilometers from his home, to find policemen in a shootout with the terrorists, who then somehow disappeared into the night. He helped the police put the injured into taxis and cars to go to the hospital. The worst part was discovering five of his staff among the fifty dead, lying in pools of blood on the station floor.

As we drove to the program I remembered the US report that in the near future terrorists would step up their activity. “‘The near future’ always comes too soon,” I said softly as we arrived in Terrigal.

Although the tragedy was thousands of miles away, it was a stark reminder of life in the material world and the need for preaching Krsna consciousness.

“Srila Prabhupada left Vrindavan for that purpose alone,” I said to myself as the doors to the hall opened and people began pouring in. “I just wish I could focus more on giving these people the spiritual understanding they seek.”

Just at that moment a well-dressed man came up to me. “Excuse me,” he said, “are you Indradyumna Swami?”

I was surprised that a guest would know my name. “Well, yes, sir,” I said. “I’m Indradyumna Swami.”

“Will you be speaking tonight?”

“Have you?” I said, somewhat embarrassed.

“Well,” said the man, “I attended one of your festivals in the Sydney area last year, and the lecture you gave proved a turning point in my life.”

“Whatever I know I’ve learned from my spiritual master,” I said.

“Actually, I just stumbled in off the street that evening,” he said. “I was a homeless person. The stress of life had made me an alcoholic. I lost my well-paying job, and my wife kicked me out of our home. For two years I wandered around Sydney getting free meals at food kitchens or eating out of garbage cans. Whatever money I’d get from begging would immediately go on wine.”

A devotee interrupted us. “Guru Maharaja, excuse me,” he said urgently. “There are nine hundred people here, one of the biggest crowds we’ve ever had. You’re on in ten minutes.”

I hardly heard him as I focused on the man in front of me.

“Then last year I passed by a hall in Newtown,” the man continued. “There was a poster outside advertising your event, and it mentioned a free feast. I tried to arrange my dirty clothes and my hair so as to look presentable and walked in. It was dark inside except for the stage, and you were just beginning your talk. I didn’t see anything to eat, so I just sat in a chair to listen.

“I didn’t understand much. But I did hear you explain what you called the four regulative principles: no meat eating, no intoxicants, no illicit sex, and no gambling. Somehow your words entered my heart and changed me. I left immediately after you finished, and as I walked down the street, I decided right then and there to follow those rules.

“Can you believe that from that day I’ve never touched a drop of liquor? I cleaned up my act. And to make a long story short, my wife took me in again and I even got my job back.”

“What a wonderful story!” I exclaimed.

“And that’s not the end of it,” he said. “I always wondered where I could meet you people again. Then six months ago one of your members approached me in the street with a book: the Bhagavad-gita. I remembered it because you had spoken about it in your talk. I bought it and began reading it that night.

“The addresses of your centers in Sydney were inside, so the next day I went to one and heard another talk. The man said that along with the four principles one should chant the Hare Krsna mantra, so I bought a set of beads. For these past few months I’ve been chanting sixteen rounds a day.”

“That’s amazing,” I said. I glanced toward the stage to see what point the program had reached.

“And my wife and I are planning a trip to India next year, to Vrindavan.”

Just then another devotee interrupted us. “Maharaja,” he said, “you’re on.”

I hesitated for a moment. Then I turned to the man. “Thank you for sharing your story with me,” I said.

“We can speak afterwards,” I said as I turned to leave.

“No need,” he said. “I’ll be leaving as soon as you’re done. I’m hoping that by hearing your talk I’ll become even more inspired to chant the holy names.”

I walked onto the stage and sat down to give my lecture. I looked over the large crowd waiting for my talk. Then I saw the gentleman I’d spoken to sitting in the front row.

Just the thought made my heart start pounding. The devotee adjusting the microphone could sense my excitement. He leaned over next to my ear. “Maharaja,” he whispered, “is everything all right?”

“Yes,” I said. “I’m fine. Everything’s fine.” Then I remembered the words of Advaita Acarya: “Wherever You are, My Lord – that is Vrindavan.”

Note: On November 29, 1971, the Chairman of the Vrindavan Municipality, its members and secretaries, and the citizens of Vrindavan Dhama offered the following words of praise to Srila Prabhupada:

“O great soul! Today we, the inhabitants of Vrindavan, known as Brijbasis, all combined offer our humble welcome to Your Holiness in this holy place of Vrindavan and in doing so feel very proud. For many years you stayed at the Radha-Damodara Temple and worshiped Her Majesty Srimati Radharani in a meditative mood, and thus you now have the transcendental vision to deliver the entire world. As proof of your perfection, we can see these foreign disciples before us, and we feel very proud to see how you have transformed them. We take it for granted that you are one of us in Vrindavan. We are sure that wherever you travel, you must carry with you the impression of Sri Vrindavan Dhama. The culture, religion, philosophy, and transcendental existence of Sri Vrindavan Dhama travel with you.

“Through the great message Your Holiness carries, all the people of the world are now becoming very intimately related with Vrindavan Dhama. We are certainly sure that through your preaching alone the transcendental message of Vrindavan will spread all over the world.”