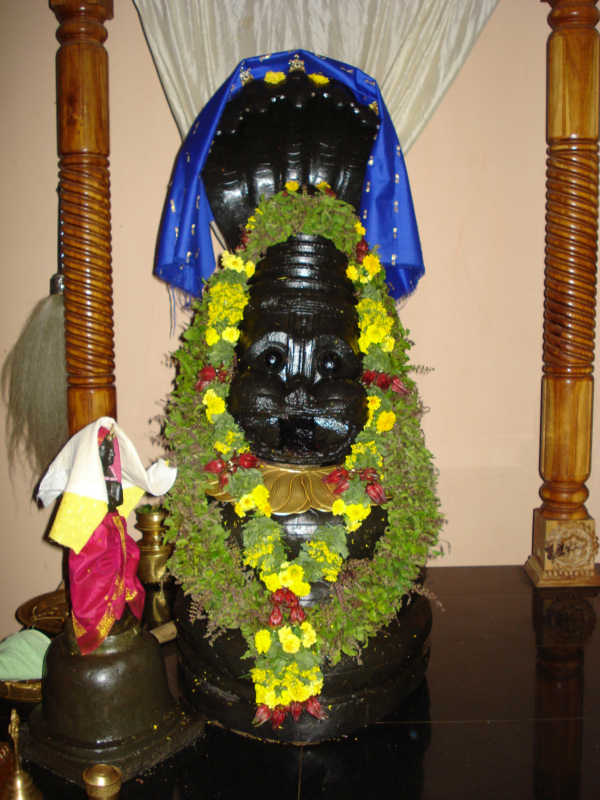 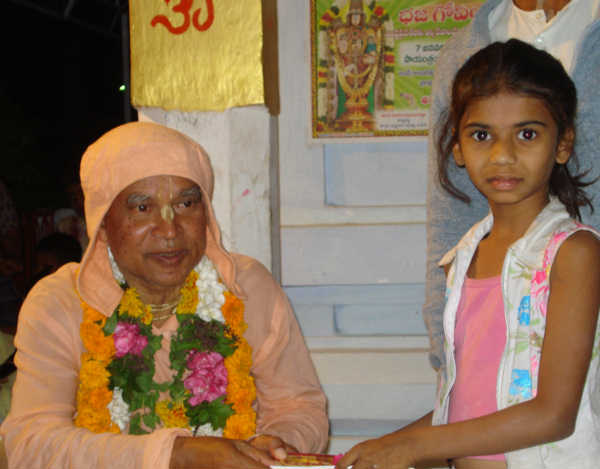 By Madhavendu (das) SSM (Vrindavan – IN)

Lord Nrisihadeva is very merciful to His devotees, and his mercy can be experienced in Andhara Pradesh, at a village called Darpally near Niazamabad, where a couple lives with the bare necessities of life.

This devotee was Lord Nrisimhadeva’s Pujari and developed attachment to Lord Narasimha deva. After his marriage he came back to his village and started Lord Gauranitai’s Vigraha seva at his home. But from the core of his heart he was prying to serve Lord Narasimhadeva’s vigraha on the same alter. His wife helped him in various ways to have Lord Nrisimhadevas Vigraha but they failed and finally decided that if the Lord wants then He will come on His own.

One day they went to visit Lord Nrisimha deva Temple at a nearby village, where their marriage took place. It was evening and they were sitting on the bank of the temple pond. At that time they were both praying to Lord Narasimhadeva’s vigraha from their hearts. at the same time, the temple pond was being cleaned and a large stone covered with mud was excavated and kept behind the couple. Upon turning to leave, they were surprised to see two black eyes watching them from the mud. They curiously removed the mud to see more of the form and they gradually found that Lord Narasimhadevha was there. They fell in love with the deity on the spot and wanted to have him. They felt disappointed as the deity belonged to the temple and left disappointed. Mataji eagerly wanted to bring the lord to her home. Generally nobody visited the temple after 5 pm, so Prabhuji went around 10 pm that evening. He prayed sincerely to the Lord to come to their home and give them an opportunity for His service. The lord’s Vigraha does not budge even with five men trying to move Him, but agreed to be lifted and transported by the devotee to his home.

That devotee wanted to take Narasimhadeva to Mayapur. Although much troublesome and risky, he managed to take him. Since this deity was submerged under water for so many years, the devotee wanted to bathe him in the Ganges. While the Lord was bathing, he didn’t want to come out and after many sincere prayers did he agree to come out. Who can comprehend of the inconceivable pastimes of the Lord with his beloved devotees?

Gauarchandra das is that fortunate soul. He joined ISKCON twelve years ago as a Brahmacari, and served various departments in ISKCON-Secunderabad, Hyderbad, Banglore, and Mayapur.

H. H. Subhaga Swami Maharaj likes this Nrisimhadeva very much and visits the Lord along with his diciples. H. G. Gaurachandra Prabhu organizes village programs for His Holiness.

There was a sweet program held at a nearby village on the eve of 7th January
2009. The program started with an ecstatic nagar sankirtan, lead by Narayani Mataji ( from Spain, who leads the Vrindavan Srila Prabhupad Samadhi kirtans), Isha Prakash Prabhu (Australia), Anuradha mataji, Anandalila mataji (Poland), Krishna Sudama Das (Iran) and other devotees. His Holiness told the story of Prahlad Maharaj and the children of the village had a sweet exchange of throwing flower petals on His Holiness and devotees. The program ended with blessing the children to make their life successful and become Krishna conscious. Finally there was Prasahadam distribution and the whole village joyously honored Mahaprashadam. At another program held on the 10th January 2009, H. H. held an ecstatic fired up Kirtan, sending all the participants floating along with the beat of the mridanga and cartals. During the lecture, H. H. quoted Srila Prabhupad’s famous statement “I am simply the pen, and Krishna has written these books personally” and emphasized the value and importance of these transcendental literatures. Many people took his words seriously and many books were distributed.