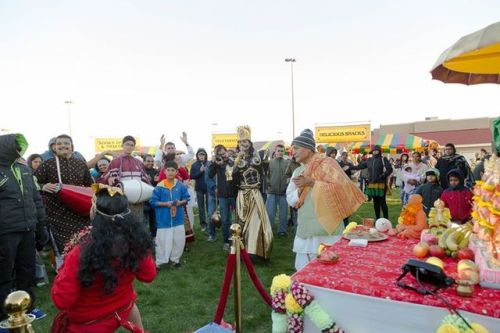 Shri Rama Vijayotsava/ Dussehra 2018 Bloomington IL (Album of photos)
The third annual 2018 Shri Rama Vijayotsava/Dussehra was celebrated by BMI -Bhaktivriksha Inspired by ISKCON on Oct 21. It was attended by approximately 600 people. Children performed a very colorful cultural program. Rama Lila was them enacted on the outdoor stage. The episode of Sita Haran and the sacrifice of Jatayu was depicted which was well appreciated by the audience. The costumes, the props and especially the outfit of Jatayu were superb. An elaborate outdoor Aarti was then performed to the Rama Parivar deities. The culmination was burning of 3 large 25 feet tall effigies of Ravana, Kumbhakarana and Meghnatha. It seems ours is the only celebration in USA that has all the three effigies of such height. There was Indian food on sale with free bouncy houses fir children. There was a Mantra Meditation tent. The atmosphere was very festive and fair like.
Find them here: https://goo.gl/Z6Y6x7

The Sacred Land Of Kurukshetra (Album with photos) Indradyumna…

O Prabhupada, We thank you from the bottom of Our heart