Nimai Pandit Das, Pioneer of the Italian Yatra, Passed Away 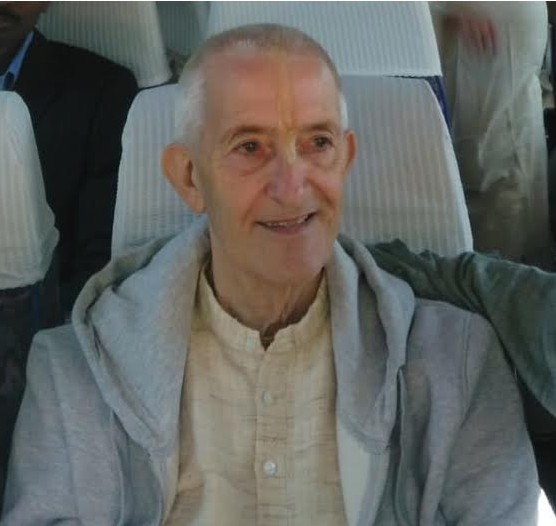 Nimai Pandit Das, one of the frst devotees in Italy after the disappearance of Srila Prabhupada, passed away on the 13 th of November at the age of 71. „He was one who never stepped back“, says Parabhakti Das, temple president of Villa Vrindavana (ISKCON Florence). „He was always available, and we could count on him.“ Nimai Pandit was not only the treasurer, but also the secretary of the temple board of Villa Vrindavana since almost 30 years. „He was a broad-minded person and able to understand the core of every problem and fnally always looking for the best solution for Villa Vrindavana and the devotees.“

He and his wife, Vishnu-priya Devi Dasi, joined ISKCON in 1981 in Milan (Italy). One year later they moved with their daughter to Villa Vrindavana and later on to a house nearby the temple. Before Nimai Pandit became involved in the management of Villa Vrindavana, he was responsible for the accounting of the Italian and the Southern Europe Bhaktivedanta Book Trust (BBT). „He had an incredible capacity for accounting“, explains Parabhakti. „It is quite rare to fnd someone like him in ISKCON.“

But this was only one of his qualifcations, among other things he was a great kirtan leader as well. Almost every morning he came to the temple to play the accordion and sing with the devotees for the pleasure of Sri Sri Radha Vrajasundara.

Although he had sincere health problems since many years, he was never complaining or even talking about his struggle with the diseases, nor he gave up. „When he had to go to the hospital for the dialsysis three times a week for four hours a day“, tells Parabhakti, „he just saw it as a great opportunity to study the books of Srila Prabhupada.“

Several times during the past years his life was about to come to an end. In the last weeks his health got a bit stronger, but in the morning of the 12 th November he has to be rushed to the hospital in Florence. The doctors found a blood vessel in his brain burst, and they didn’t give him much time. Slowly he lost his consciousness, and fnally it was only due to the life-support machine that his heart was still beating.

Devotees from all over Italy were coming to the hospital to take farewell of him, and devotees from all over the world sent their heartfelt prayers for him and his family. In Jagannatha Puri about 7.000 devotees were praying for him, the devotees in Mayapur were singing a Kirtan, and Food for Life Vrindavana (FFLV) dedicated a Prasadam Feast to Nimai Pandit. Finally in the morning of the 13 th of November he passed away, after his spiritual master, His Holiness Radhanath Swami, was chanting the Holy Name into his ear via phone.

One day after his departure, on the 14 th of November, a ceromony in honor of Nimai Pandit was held in Villa Vrindavana. About 200 guests were coming to say goodbye to him. Many devotees were expressing their appreciation for Nimai Pandit, a sacrifce was performed, fowers were ofered, and all present were singing the Holy Name. It was a sad and beautiful ceromony at once and above all a worthy tribute to Nimai Pandit Das.

„Most of all I appreciated about Nimai Pandit that He was always loyal to Srila Prabhupada“, says Parabhakti. „I will miss a friend.“ He doesn’t know where Nimai Pandit was going after his departure, but he is sure that Nimai Pandit will continue his service for Krsna and His devotees, because he used to say about his own death: „If Krsna’s needs me in another place, I’m available.“

The spider effort. Sacinandana Swami: Today I sat at the banks...
Damodara Masa in Iskcon Nepal (Album of photos) Only 7 days...