ABOUT THE PRE-EMINENT IMPORTANCE OF BOOK DISTRIBUTION 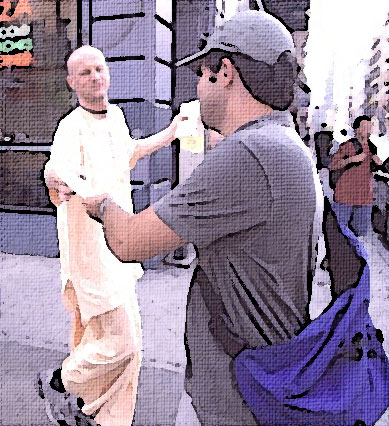 Please accept my humble obeisances. All glories to Srila Prabhupada, the Founder- Acarya of Iskcon and Institutor of BBT!

This kit ( you will find it in the archives section of the site ) represents a humble attempt to impress upon you the pre-eminent importance of book distribution within the Krishna Consciousness Movement and aims to help you to make the distribution of Srila Prabhupada’s books and the books of his faithful and talented disciples a regular feature of your total service contribution to Iskcon and to Lord Krishna, if you haven’t already done so.

“…I have personally placed my books formerly in the library of Bombay which they were very glad to accept.” On the back cover of Lilamrta, volume one, there is a picture of Srila Prabhupada handing a book to Sri Lal Bahadur Shastri the former Prime Minister of India. We also know that he would sometimes distribute his newly printed and autographed books after giving a class.

Book distribution does not mean exclusively street Sankirtan. It is a state of consciousness. Just as we are striving to be Krishna Conscious, we should also strive to be Book Distribution Conscious and constantly ask ourselves Srila Prabhupada’s question “Where is book, where is book, where is book?” One may distribute books while traveling, while shopping, while visiting friends and relatives, while going to the hospital, while performing one’s routine devotional service or worldly activities, and of course after giving a class or at preaching programs.

But charity begins at home, meaning to say that we must be willing to administer the medicine to ourselves, i.e. to plan at least one or two hours a day, besides scheduled classes, to study and become conversant with Srila Prabhupada’s books. The sales person who has full conviction of the superior quality of his product is a successful sales person. Srila Prabhupada’s books are the best books available in the three worlds because they not only offer the universal remedy for all the miseries of materialistic existence but also “enable us the fully taste the nectar for which we are always anxious”. Due to our conditioning and negligence, however, we do not always appreciate them at their proper value. This mentality we have to reform.

Book distribution also means to practice ahimsa or nonviolence. The relevant passage of Bhagavad-Gita As It Is 13.8-12, Purport, speaks for itself: “People in general are trapped by ignorance in the material concept of life, and they perpetually suffer material pains. So unless one elevates people to spiritual knowledge, one is practicing violence. One should try his best to distribute real knowledge to the people, so they might become enlightened and leave this material entanglement. That is nonviolence.”

Although Srila Prabhupada’s books are not ordinary mercantile commodities, still we should endeavor to distribute them at the recommended retail sale’s price.

Besides highlighting some important quotes, I have divided another 40 or so quotes from Srila Prabhupada’s Letters according to four headings as follows. These represent indeed only a fraction of the passages available on this topic to the inquisitive and scrutinizing reader.

I. General importance of book distribution and its relative importance compared to other transcendental services

II. How much Srila Prabhupada is pleased by book distribution.

III. Quantity of books Srila Prabhupada expects us to distribute.

N.B: According to the World Samkirtan Newsletter, 455,000,000 pieces of literature have been distributed worldwide to May 2006. All glories to the Samkirtan book distributor devotees!

Last but not least, there is a quote about the importance of cookbook distribution which in Srila Prabhupada’s own words is also “very important.” Finally there is another letter about the need for proactive Samkirtan.

If this kit inspires only one devotee to significantly increase his book distribution on a regular basis and for the rest of his active devotional life, I will consider this attempt a success. Thank you very much and good luck in your endeavors.

Bhagavad-Gita attracting the actors
Can a child abuser live in ISKCON?

3 Responses to “ABOUT THE PRE-EMINENT IMPORTANCE OF BOOK DISTRIBUTION”