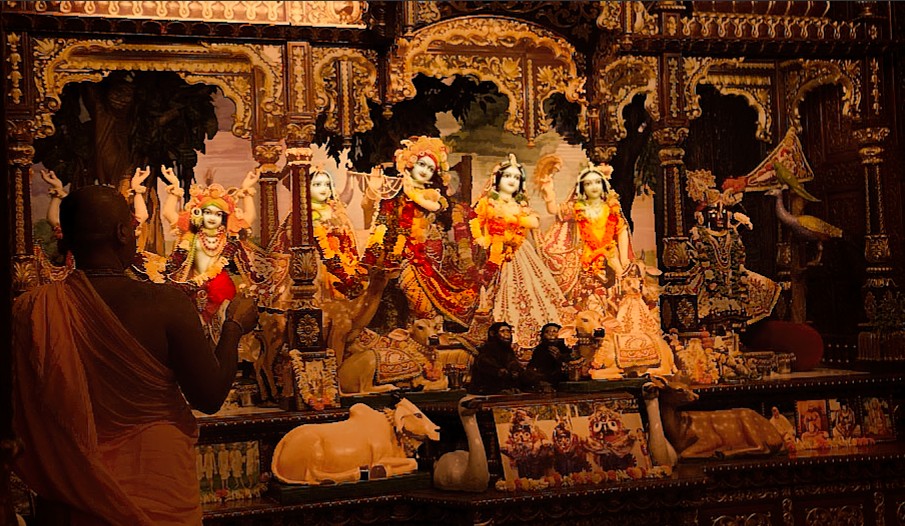 Below is text of a response I wrote and posted to the Krishna Katha conference on PAMHO in response to the question: “Could someone please post the scriptural significance of performing/attending mangala aarti?”. It was just found by someone Googling for “mangal arotik” and sent to me. Copying it to a few friends and students, one godbrother friend who seems to have appreciated it very much responded urging me to send it to you.

From the nature of the question itself, the style of the presentation and the vocabulary, the questioner who asked:

Could someone please post the scriptural significance of performing/ attending mangala aarti.

is, obviously to me, a typical new, or newish, devotee wanting to know some of the historical background of this arotik in ISKCON as well as something about its spiritual significance. While the answer by Atul Krishna das is certainly interesting to someone who might possess some qualification to understand and discuss rasa and raganuga bhakti, in a public forum in an institution such as ISKCON, directed as it is to the people in general, it was not an appropriate response. As a member of ISKCON for more than thirty years I would like therefore to present some of my own learning, perceptions and realizations on the subject in the hope that they will help younger temple-dwelling members and house-dwelling congregational members in their performance and appreciation of this _mangala_-auspicious ceremony.

First of all: it begins at the beginning of the brahma muhurta — that time period beginning one an a half hours before sunrise as it occurs on the average day in India. (This is the position of texts such as the Sanat Kumar Samhita of the Narada Pancaratra… the collective body of literature which is the scriptural authority for all things relating especially to deity worship in temple or home, festivals, temple affairs, acara for the sadhaka, etc.) This time period is mangala because the air is still and quiet and all living entities have now completed sufficient rest from the previous days activities (so that their bodies and minds are rested and refreshed, all the toxins that had built up from the days activity have been cleared out of the bloodstream, damaged and worn tissues have been repaired, etc.). The sadhaka immediately after awakening thinks of his sambandha, abhidehya and prayojana or, if he is not yet on that platform, of his obligatory duty as an asram-ite to rise and prepare to attend the arotik. After arising he must evacuate the bladder and bowels, cleanse teeth and tongue, thoroughly bath, put on fresh clothes, apply telok, go to the temple, bow down and await the blowing of the conch and the opening of the deities’ curtains.

The mangala arotik prayer selected by the Acarya of ISKCON, His Divine Grace A. C. Bhaktivedanta Swami Prabhupada is Sri Gurvastakam – Eight Prayers glorifying the Spiritual Master by Srila Visvanath Cakravarti Thakur. The singing should be led by the most qualified in terms of singing ability; that is, i the ability to sing, as His Divine Grace says, “in the manner of the predecessor acaryas”. When I joined ISKCON, in Montreal in 1969, the most qualified singer was Baradraj prabhu, a fine singer by any standard (a former accomplished rock band musician) and an expert player of the mrdanga, similarly in the manner of His Divine Grace. (So expert were he and a select few other musicians in chanting and playing the instruments in the way of Prabhupada, that once when he and another expert musician, Candanacarya prabhu, were doing kirtan in one room [in Boston], I, in another room thought, without doubt, that Prabhupada was there singing and playing mrdanga.) Of all the sixty four arts practiced by the gopis and in the vedic culture, among the topmost if not _the_ topmost, is singing. Krishna learned how to sing in the _kula_ of Sandipani Muni. Students of Indian classical music now spend twenty or thirty years learning how to sing. It is not a question of simply mouthing the words even though “loud and clear” (although that, by itself, is not completely devoid of merit). It best requires some bhava, devotional emotion (which one can hear Prabhupada’s voice suffused with). Or at least knowledge and obedience to the standards. If there is no one else present with any devotional idea, then any sincere devotee present, even though his voice may be completely untrained, should sing rather than any professional style singer present lacking a true devotional attitude.

Besides the matter of the high philosophical contents of the prayer being sung, there is the matter of the singing being an offering to the deities. Just as there is the injunction (in Nectar of Devotion) that no-one can touch the deity other than a properly initiated person, singing should also be done by someone who has properly understood the purpose of the Krishna consciousness movement. In other words he should be a true devotee.

Musical accompaniment should be limited to one or two pairs of karatals (of the flange-less variety, 3 to 4 inches [8 to 10 cm] in diameter), and a mrdanga. No harmonium. Karatals should not be louder than half the loudness of the voice and the mrdanga about half of that. Singing and instrument playing should be melodious and rhythmic, building up slowly in rhythm from very slow at the beginning to a spiritual culmination … not a crashing crescendo … at the end of the aroti. The first verse of the Gurvastakam may be repeated after the fourth and the penultimate eighth. After Gurvastakam, the Prabhupada Pranams mantra is sung three times with response after each, then the Pancatattva maha mantra similarly. Then the maha mantra until the final blowing of the conch. That is the end of the arotik. After Prema Dvani prayers are recited, the Nrsimha prayer is sung
(without any invocation of Prahlad Maharaj, Narahari, or any other deities). That is the ISKCON mangala arotik.

If the reader has not already, from reading all the above, understood why Srila Prabhupada was emphatic in his insistence that everyone attend mangala arotik I will elaborate a little. When performed properly according the instructions of the acarya, it is very powerfully purifying. The time is the most purifying as far as the subtle energies that influence our bodies and minds and the Gurvastakam prayer presents the essence of vaisnava philosophy. When conducted properly in all respects, the mangala arotik is potent in the matter of awakening the dormant Krishna consciousness in participants and audience and the emotion of compassion for the fallen conditioned souls, independent of their knowledge or ignorance of the language of the prayers or any other conditions.

Mangala arotik as I encountered it upon joining ISKCON was so spiritually purifying that I, already no longer a youngster and without any previous exposure to _sadhana_ – with its early rising and cold bath (and there was no hot water heater in the temple in the below freezing cold winters of Montreal either), was encouraged to quickly learn the prayers and occasionally lead – with Baradraj’s permission. A few months or years later, in other temples I would often lead. Now, and for years, I do not lead at all and have not lead for more years before that. What I consider the rules for mangal aroti kirtan as I have presented them above are practically not understood at all in the zone where I have been for the past
25+ years… maybe at one or two of the big temples, but I am hardly at those. I deliberately avoid leading even if invited because I have enough experience of younger know-it-alls, with karatals or other instruments in hand, while the arotik is in progress – revolting against my “conservative”, “old-fashioned” way. Not only do I not lead but the singing and instruments are so loud that my body and nervous system cannot tolerate it. I attend because it is one of the temple “rules of residence” but I don’t enjoy it. I don’t appreciate the loudness, the tunes, the style, the various and changing rhythms, additional mantras, etc. I wear earplugs and sit an the sidelines. In the face of all this, I have forgotten some of the words.