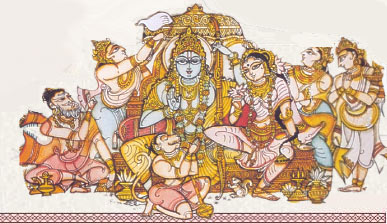 While traveling with the Vaisnava Youth Tour we went to Thunderbay Canada, there I met a devotee named Prema, a doctor, originally from Pune India.

There are no devotees in this remote place. So he decided to do some preaching, and maybe make some devotees.

By the arrangement of Krsna a Professor at the local university heard about a drama called “Ramayana” and wanted to perform the drama at the school. She heard from Prema that Bhakti Marg Swami in Toronto had the script. She got in touch with him and convinced him to go to Thunderbay to organize the play.

He had no devotees to play the parts so he asked for some local students to play in the parts. He had about eight people to work with (all non-devotees).

Each night 300 people showed up paying $8 per person. They loved it. Prema Prabhu also had a table of Prabhupadas books available and distributed $200 worth of books.

What really impressed me was that all eight actors now attend a bi-weekly Bhagavad-gita class.