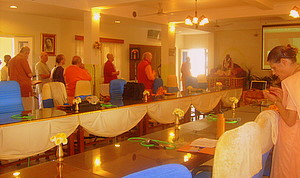 The 2009 Annual General Meeting of ISKCON’s Governing Body Commission commenced with arati and guru-puja kirtana to Srila Prabhupada, who is present in murti form in the meeting hall. Apart from the large murti, this year there is a small murti of Srila Prabhupada fixed on a beautiful altar near the Chairman’s seat. After the reading of Srimad-Bhagavatam 1.9.16, Ramai Swami, Chairman, began the proceedings by explaining the absence of several members, mostly due to health issues. He also gave a brief summary of the Executive Committee’s work during the year.

After this, as is now the tradition, the BBT, headed by Madhu Sevita Prabhu and Brahma Muhurta Prabhu, made the opening presentation on the achievements of the BBT, book distribution results and trends across the world, and translating and printing highlights, such as:

· Printing of the Vietnamese “Perfect Questions, Perfect Answers,” the first government-approved book printed in that language

· Entire Braille set of Srila Prabhupada’s books in English and Italian available for download and listening from the website www.sathyaananda.it

· The first printing of the Kazakh Bhagavad-gita, bringing the total number of languages the Gita is available in to fifty-seven

· *The BBT is currently working on 240 new titles

· Overall, more than 467 million of Srila Prabhupada’s books have been distributed to date!

Brahma Muhurta then orchestrated a raffle of a special gift originally made for the European sankirtana devotees: an Ipod containing nine hundred hours of audio by Srila Prabhupada. Ironically, the winner was Madhu Sevita who promptly gifted the prize to Guru Prasad Swami.

Lastly, Gopal Krsna Goswami was called on to explain the astonishing distribution scores from his Indian temples. He shared that book distribution thrives wherever the leaders stress it.

The GBC body applauded both Gopal Krsna Goswami for his strong promotion of book distribution and Prahladananda Swami who, having begun distributing books in 1968, is reportedly the longest continuous book distributor in ISKCON.

After this encouraging report from the BBT, Vice-chairman Romapada Swami led a discussion on some legal issues currently facing the society. Aniruddha Das, GBC Deputy member, then led the Body through straw voting on proposals already discussed by the Deputies. Topics included International Steering Committee, Female Diksa Gurus, Rescinding Resolution 311 (of last year) and an issue from the Kirtan Standards Committee regarding appropriate mantras.

After lunch served on the Lotus Building verandah, the Body reconvened at 4:00 pm for a discussion on the Puri Ratha Yatra issue. After considerable discussion from various angles, Anuttama Das, Communications Minister, was deputed to create a task force of concerned and informed devotees, including Radhanath Swami, Gopal Krsna Goswami and Bhakti Purusottama Swami, to further deal with this issue.

February 13-14, Days Two and Three of the GBC Meetings
Spiritually Miraculous and Magical

Letter of Appreciation to Sivarama Swami — 2019

Bhaktin Lord Mayor is at it again!