The Art of RESPONDING EFFECTIVELY | Turning Crisis into Opportunities 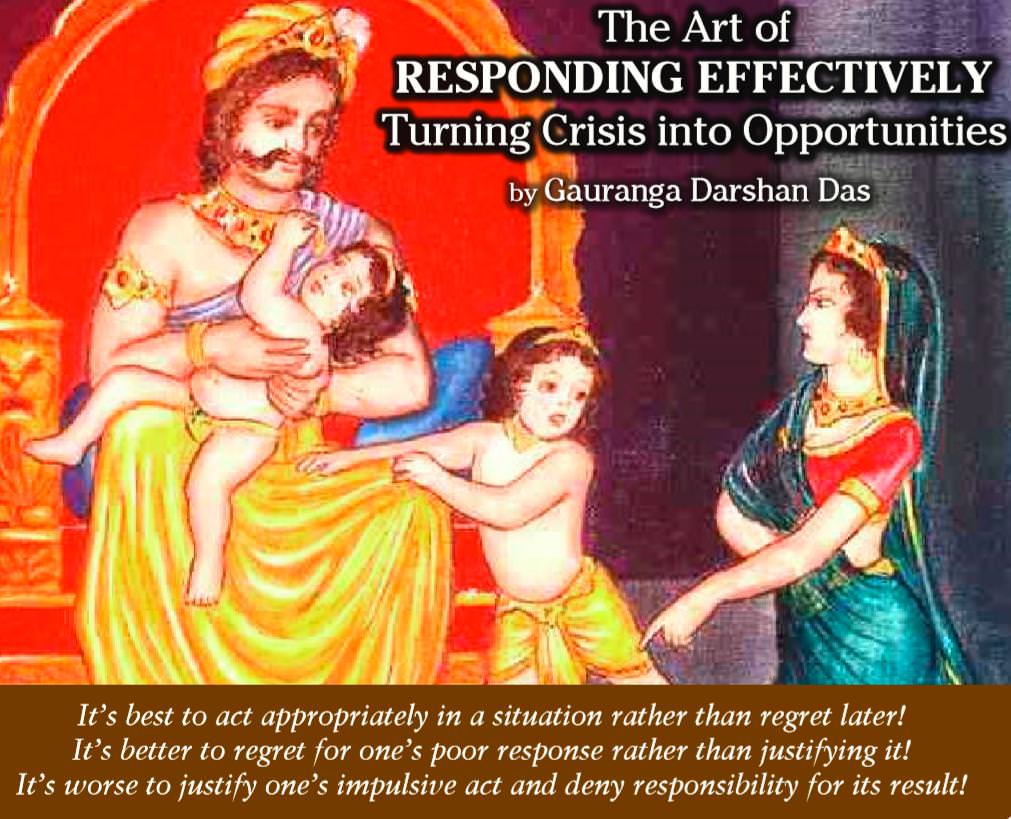 It’s best to act appropriately in a situation rather than regret later!
It’s better to regret for one’s poor response rather than justifying it!
It’s worse to justify one’s impulsive act and deny responsibility for its result!

Did someone ever mistreat you? Did you ever hurt someone? How had been your response in either case? A sensitive heart regrets when one fails to respond sensitively. Having said or done something that pained someone or yourself, one often thinks, “Oh I could have been polite!” “Maybe I should not have taken it so seriously!” “Alas! I overreacted, I misunderstood!” But learning to respond appropriately in a situation can turn crisis into great opportunities.

Poor Responses of a Weak Heart

One reacts impulsively at times, due to the heat of situations or lack of maturity. Even if one knows what is right and what is wrong, one’s weaknesses do not allow one to act aptly. The heart’s weakness is often due to egoistic pride, undue attachments and unfair obligations.

King Uttanapada had two wives, Suniti and Suruci. He loved his younger wife Suruci, but neglected Suniti. One day, Uttanapada was sitting on his throne with Suruci’s son Uttama, on his lap. Then Suniti’s son Dhruva also came there desiring to sit on father’s lap, but Uttanapada didn’t welcome him.

Suruci then spoke to Dhruva proudly, that because he was not born from her womb, he was not qualified to sit on his father’s lap.

The childhood innocence of Dhruva didn’t see any distinction between Suruci and Suniti, but the envious attitude of Suruci showed him such difference. By worshiping the Supreme Lord, one can become free from the cycle of birth and death. But arrogant Suruci told Dhruva that he could take birth in her womb by worshiping the Lord. Such is the nature of pride.

A child naturally deserves affection from an elder. No elder refuses to fondle a child when the child himself approaches for it. What to speak of a father and a king? A father is supposed to treat all his children equally. And a king’s responsibility is to take care of all his citizens equally. Uttanapada was both a king and a father, but failed to treat his two sons, Uttama an

d Dhruva equally. His favoritism towards Suruci made him indifferent to Dhruva and ignore his duty as a father. He did not even stop Suruci who was unnecessarily outrageous.

His innocent desire being thwarted, Dhruva was disappointed. Further, the insulting words of his stepmother and the silence of his father broke his tender heart.

An earthen pot, once broken, is not reusable. Even if one manages to put the broken pieces of the pot together and makes it usable again, one has to be extremely careful in handling that pot, much more than a new pot. Any slight mishandling of such a repaired pot breaks it and makes it irreparable. Relationships are also like that. If one is not sensitive in dealings, that could break someone’s heart permanently.

Just Response of a Devoted Heart

Hissing like a snake, Dhruva went to his mother Suniti, crying. Suniti was already in pain, being neglected by her husband. Now she became devastated to see her child insulted by her co-wife.

rious lady and a devotee of Lord Krsna, Suniti spontaneously pacified Dhruva with wise words to avoid any negative feelings to overcome him. She told him three things in particular, “(i) Never desire harm for others who might have caused you pain, (ii) Everyone suffers due to one’s own past deeds, (iii) Whatever may be your desire, to fulfill that, you need to worship the Supreme Lord.”

Suniti told Dhruva, “My dear boy, you also should take shelter of the Supreme Personality of Godhead, who is very kind to His devotees. Persons seeking liberation from the cycle of birth and death always take shelter of the lotus feet of the Lord in devotional service. Becoming purified by executing your allotted occupation, just situate the Supreme Personality of Godhead in your heart, and without deviating for a moment, engage always in His service.” (4.8.22)

Situations are not within our control, but our response is. Thus, instead of accusing Suruci or Uttanapada, Suniti maturely directed Dhruva towards Lord Vasudeva. When others hurt us, it is difficult to see any good in their words or actions. But Suniti told Dhruva that Suruci was correct in saying that ‘one should worship the Supreme Lord to fulfill one’s desires.’ Suniti valued this statement more and ignored to react to all the other offensive statements of Suruci.

Srila Prabhupada writes, “Both the mother and the son were lamenting Dhruva Maharaja’s having been insulted by his stepmother and his father’s not having taken any step on this issue. But mere lamentation is useless-one should find out the means to mitigate one’s lamentation. Thus both mother and son decided to take shelter of the lotus feet of the Lord because that is the only solution to all material problems.” (SB 4.8.24 P)

Blaming, arguing and lamenting are natural in calamity, but one should surpass that stage to maturely consider what best could one do in such a situation. And the best thing to do always is to seek God’s shelter, apart from doing whatever else is humanly possible. One can be hopeful in the most hopeless situation by taking shelter of Krsna.

Our good consciousness can positively influence others, while our poor attitude can negatively affect others. We can see this contrast between the characters of Suniti and Suruci.

Having heard from his mother that Supreme Lord Krsna fulfills all of one’s desires, Dhruva left home to worship Him. However, due to the insult done by Suruci, he developed an ambitious desire to attain a position superior to his father and even Lord Brahma. He was so ambitious for this position that he didn’t even accept the advice of Narada Muni to return home. Finally, Narada instructed him to chant, “Om namo bhagavate vasudevaya,” to attain his goal. Dhruva then practiced bhakti with great determination and in six months, he attained the darsana of Lord Visnu, who blessed him in various ways.

Honest Regret After an Unjust Response

When little Dhruva went to the forest alone, Uttanapada lamented for his hardhearted behavior towards Dhruva and Suniti. It was not that Uttanapada didn’t have affection for Dhruva. He certainly loved his son. But due to his excessive attachment towards Suruci, he couldn’t welcome Dhruva or stop Suruci from chastising Dhruva. He honestly regretted for his misdeed. He condemned himself for being a henpecked husband and an irresponsible father. But by this time, Dhruva had already left home!

Some errors are irreversible. We can’t always undo something even if we realize that what we did was inappropriate. Sometimes, although we realize our mistake, and try to rectify, that opportunity has already slipped out of our hands. For instance, after a student has just come out of the examination hall submitting his mathematics answer sheet, even if he realizes that he had used a wrong formula to solve a problem, he can’t rectify it anymore. Similarly, even if a cook realizes that he has put more salt than required in a preparation, he can’t undo it. Having responded with a wrong answer in the interview, an employment seeker cannot go back and prove his knowledge in front of the interviewer.

Wasted time will not come back, and spoken words cannot be taken back. Thus one should be learn to act appropriately on the spur of the moment. That is best.

But the good news is that there is a second-best thing. One can remember one’s mistakes and be cautious not to repeat them in future. Having failed in an exam, a student can be more careful in the next exam. Having spoiled a preparation, a cook can make it better the next day. But the impetus to improve oneself comes from an honest repentance for one’s mistakes and sincere efforts to rectify them.

Uttanapada started treating Suniti with love. When Dhruva returned after attaining benedictions from Lord Visnu, Uttanapada received him with warmth and affection. Noble hearted Suniti didn’t hold any grudges towards Suruci or Uttama, but took them in the same palanquin as herself. Even Suruci gave up her inimical attitude towards Dhruva, and blessed him to live long. Dhruva gave up his grudge towards Suruci and bowed down at her feet. Dhruva gave up his anger towards Uttama and hugged him. When Dhruva grew up, Uttanapada made him the king.

Suruci acted impulsively due to pride and envy. Uttanapada acted imprudently due to attachment to wife. Dhruva acted obstinately due to material ambition. Suniti acted maturely due to her devotion to Lord Krsna.

Because Suniti herself was a great devotee, she could inspire Dhruva to take to devotional service. Although Dhruva was ambitious, because he received the guidance of great devotees like Suniti and Narada, he was purified and elevated. Although Uttanapada neglected his glorious wife and son, he honestly repented for his misdeeds and took to good behavior soon. Although Suruci was envious and proud, the kindness of Suniti and spiritual success of Dhruva brought positive transformation in her.

Thus it is bhakti, or devotional service unto Lord Krsna, that ultimately brings about ideal transformation in a person and makes one respond suitably in different situations. All our chanting, hearing and other devotional practices should make us act appropriately on the spur of the moment. That may not happen overnight, but a sincere practice of bhakti, helps one – (i) identify where one needs to improve, (ii) sincerely desire to overcome those shortcomings, (iii) pray for improvement, (iv) seek guidance, (v) cultivate right intentions, and (vi) endeavor to act sensitively and wisely.

It’s a wonderful journey that all of us need to take up in lives, from an impulsive negative response to spontaneous positive response in trying situations. Whether the journey is long or short depends on how sincere are we to travel under wise guidance and sincere practice on the path of devotion.

Srila Prabhupada: You chastised me, I like that. I am very happy with your words!

Impersonalism and the Doomed to Fail Attempt to Judge Sadhus