“Encourage them more and more.” 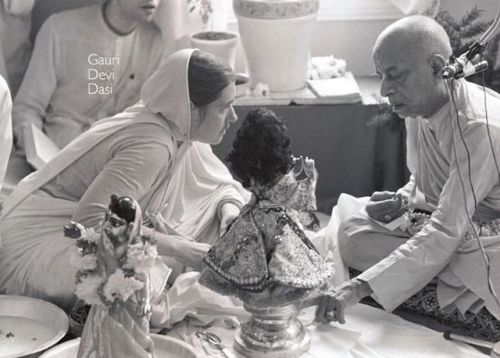 “Encourage them more and more.”
Visakha Devi Dasi ACBSP: Be personal. Honor each individual for who he or she is. This principle was repeatedly exemplified by Srila Prabhupada throughout his time with us. As he saw how everyone is spiritually equal and should have an equal opportunity to participate in his movement according to his or her qualifications and propensities, so can we. As he encouraged everyone, so can we. In the world today, there’s a dire need for this cutting-edge, spiritual vision, a vision that’s resonant with Krishna’s teachings, that’s attractive, and that’s natural. Implementing it would be an enormous contribution to the world, a contribution that could set the example of how to see past externals and evoke each person’s genius. Srila Prabhupada was an expert encourager. He sometimes insisted that Yamuna lead kirtan, Himavati speak, Kausalya recite the Isopanisad. As he wrote to Satsvarupa Dasa in a letter, “Encourage them more and more.” One who’s encouraged can move mountains.
Everyone should be allowed to render service to the Lord to the best of his ability, and everyone should appreciate the service of others. Such are the activities of Vaikuntha. Since everyone is a servant, everyone is on the same platform and is allowed to serve the Lord according to his ability. (SB. 7.5.12, purport)

One Response to ““Encourage them more and more.””