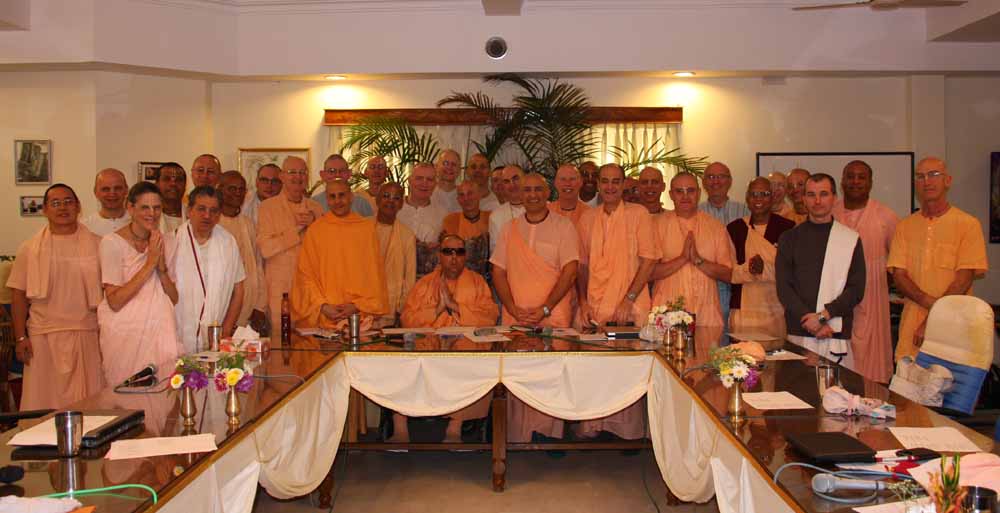 Anuttama Prabhu gave the progress report of the Succession Committee. This committee is dedicated to ensuring that the future leaders of the society imbibe Srila Prabhupada’s mood, a commitment to the ISKCON mission, and spiritual character and integrity. A twelve week series of courses for potential future leaders has already been launched in Russia, with India, Germany and the USA all to start during this year.

Sesa Prabhu of Constitution Committee shared that his committee has integrated the feedback they received from the GBC during the October meetings and simplified the constitution by focusing more on concepts rather than definitions. A major achievement has been to chronologically compile all the quotes from Srila Prabhupada on leadership and the GBC. This 270 page document, as well as a fourteen page summary, will be made available to all the GBC members for them to pick out the most striking quotations which can then be included in the constitution.

Next was the Preaching Committee. Harivilas Prabhu shared their list of necessary “cultures” for the preaching to thrive:

1. Culture of courtesy–Good behavior, good cooperation, and good organization are imperative to attract newcomers.
2. Culture of authority–Srila Prabhupada established his authority not by dictates, but by sharing love.
3. Culture of Inspiration–New devotees must be encouraged to be part of the team and eager to see their peers advance.
4. Culture of book distribution–This should be stressed by the leaders.
5. Culture of spiritual standards–Our words will become empowered if we strictly follow the spiritual standards.
6. Culture of gifting–During a Ratha Yatra speech, the Mayor of San Francisco praised the devotees for being “givers.” Guests should feel they were gifted much more than they gave.
7. Culture of local support–Visiting preachers and gurus need to support local temples.

Badrinarayan Das of the Parallel Lines of Authority committee reported that Bhanu Swami is writing a book on the authority structure of ISKCON explaining how a movement with many gurus can function under an administrative body. A draft of this book will be ready by the October meetings. The committee is also planning a series of courses to instil a strong sense of membership among all devotees.

The Devotee Care committee’s representative, Revati Raman Das, screened a powerpoint presentation detailing the ISKCON Chowpatty model of devotee care. The committee plans to widely broadcast their vision on devotee care, beginning with a seminar on this topic during the Mayapur Festival by Radhanath Swami, Kavicandra Swami, and others. Revati Raman also reported the proposed construction of a retirement village for elderly devotees in Tirupati.

Finally Organizational Development team member Ramai Swami spoke on the need for ISKCON to have a global impact, apart from the successful projects going on in many local areas.

During the afternoon the subcommittees continued their work, after which Gopal Bhatta wrapped up the three-day strategic planning session by thanking the core members of the strategic planning initiative: Aniruddha Das, Kaunteya Das, and Laxmimoni Devi Dasi.

GBC Vice-Chairman Romapada Swami in turn conveyed the appreciation of the Body for Gopal Bhatta Prabhu’s efforts: “By his involvement the GBC is doing much substantial work. The culture of planning for the future of our movement is evolving, which is itself the biggest result.”

Gopal Bhatta has put in much time and money in this initiative which was warmly noted by the Body. He concluded by stating, “When we heard the reports from the committee chairs, we were extremely pleased. The biggest change is that the GBC is devoting so much time to our future. That is very powerful. Another significant change is that the team spirit of the GBC is developing.”

“So the future of this Krishna Consciousness movement is very bright, so long the managers remain vigilant that 16 rounds are being chanted by everyone without fail, that they are all rising before four in the morning, attending mangal arati-our leaders shall be careful not to kill the spirit of enthusiastic service, which is individual and spontaneous and voluntary. They should try always to generate some atmosphere of fresh challenge to the devotees, so that they will agree enthusiastically to rise and meet it. That is the art of management: to draw out spontaneous loving spirit of sacrificing some energy for Krishna. But where are so many expert managers? All of us should become expert managers and preachers. We should not be very much after comforts and become complacent or self-contented. There must be always some tapasya, strictly observing the regulative principles-Krishna Consciousness movement must be always a challenge, a great achievement to be gained by voluntary desire to do it, and that will keep it healthy.”

Mayapur Sanga of ISKCON Sannyasis, Gurus and GBCs – Day One