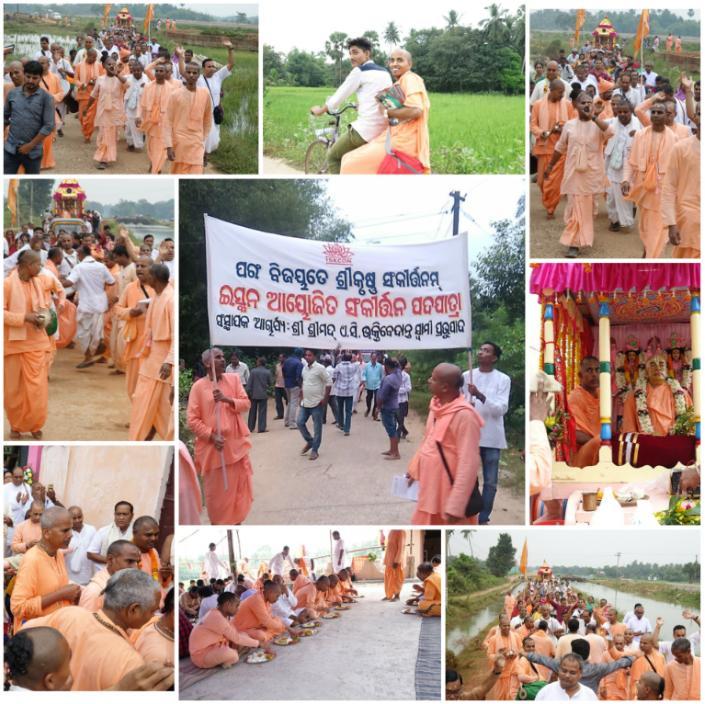 Like previous years, during the auspicious month of Kartika, the ISKCON Bhubaneswar Nama-hatta Department organized a grand 20 day Sankirtan Padayatra from October 10 to November 16 in the district of Jajpur, Odisha.

For remembrance, the Sri Krishna Balaram Temple of Bhubaneswar was the last project founded by Srila Prabhupada, and it was inaugurated in 1991. It was Srila Prabhupada’s dear disciple, Gour Govinda Swami, the epitome of Krishna consciousness in Odisha, who started padayatra in 1992 for preaching Krishna Consciousness in the rural areas of Odisha in order to inculcate pure Vaisanava philosophy in the minds of simple villagers in the line of Sri Gauranga Mahaprabhu.

The 2018 padayatras was inaugurated by Haladhar Maharaja on October 18 at the ISKCON Preaching Centre of Lakhbindha in the district of Jajpur, in the presence of temple president Premanand Das,  vice-presidents Satwatapati Das and Kasinath Pandit Das,  Upendra Mishra Das, Chairman of the Temple Festival Committee and Gokulanand Das, Director of the ISKCON Congregation Unit. More than 100 devotees, from both ISKCON and the town of Jajpur, were present. Maharaja gave a nice speech and narrated the activities of the padayatras  previously organised  in the presence of Gour Govinda Swami.

A well decorated bullock cart, on which a murti of Srila Prabhupada was seated along with the deities of Sri Sri Sankirtan Gaur Nitai , was the main attraction for the participants, local followers and the villagers. There was also a palanquin to carry the utsava murtis of Gaur Nitai. In each village along the route the procession was welcomed by the villagers, at the entrance of the village and on reaching their pandals. A large banner read:  “On the Occasion of Disappearance day of Srila A.C.Bhativedanta Swami Prabhupada (Founder Acharya of ISKCON), Sankirtan Padayatra 2018 (Param Bijayate Sri Krishna Sankirtanam)

From October 28 to November 16 the padayatris walked from the Birajapur ISKCON Preaching Center to the village of Khandra, thus visiting 20 villages.  The daily evening program of the padayatra was attended by all the villagers. Haladhar Maharaja, Akshay Hari Das and Satwatapati Das were the main speakers, giving discourses on Hari-Katha and Gaura-katha to the rural masses.

This padayatra, a grand ISKCON festival, was a huge success, due to the 100% cooperation of the villagers. Our devotees distributed many books of Srila Prabhupada: 10 Bhagavatam sets, 5 Caitanya-caritamrita sets, 400 Small, 200 Gitas, 100 magazines  and 500 Bhaghavad Darsan in Odisha.  Many devotees participated, all from India: 40 temple devotees, 70  from the congregation and  400 visitors. Among these were  2 sannyasis, 45 grhasta men,  25 grhasta women, 40  brahmacaris and 10 teen-agers.  There was a total of 20 public festivals, 10 home programs and 11 school programs; and  one newspaper article, without photo. Prasadam distribution was impressive with 4000 packets of khicadi and  2000 full plates of  rice,  dalma, vegetable and  kheeri.  In this way the devotees of our Nama-hatta department, under a very dynamic leadership, have gone a long way in preaching Krishna Consciousness in Odisha.

Chant, dance and be blissful

One of the 40 brahmacaris

Walking Back to Godhead