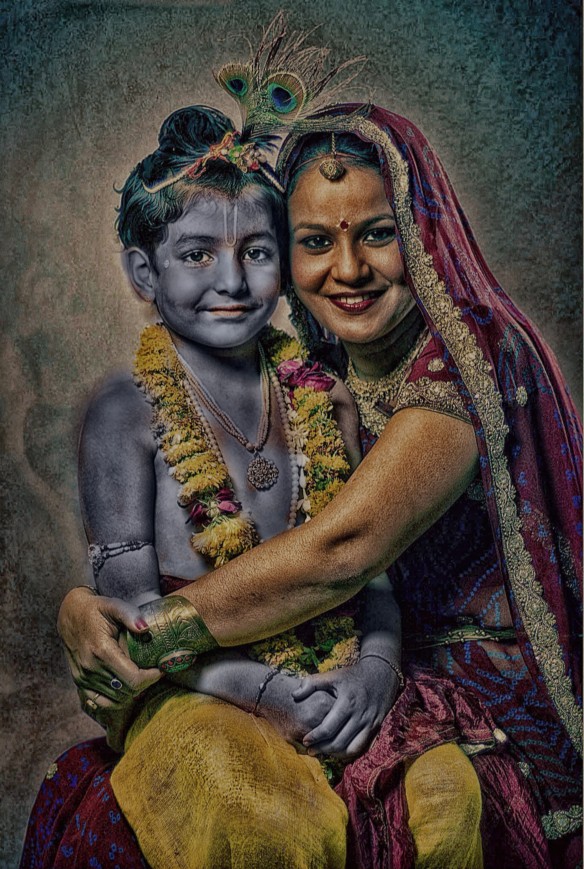 Bhagavad Gita and Srimad Bhagavatam are two most important scriptures for Kali Yuga, they have specifically manifested for us kali yugians. If we sincerely try to serve these two transcendental scriptures then we can unlock many hidden gems. Let us take a look at the famous verse from Bhagavad gita

One who knows the transcendental nature of My appearance and activities does not, upon leaving the body, take his birth again in this material world, but attains My eternal abode, O Arjuna.

As we read the above verse it looks too simplistic, as if Krishna is simply encouraging everyone to accept His shelter by holding a big carrot in front of us! Rather, coming out from the lotus like mouth of Krishna, every single verse of Bhagavad Gita is Absolute and so is its conclusion and promise. Srila Prabhupada further declares in his purport –

He who accepts this truth on the strength of the authority of the Vedas and of the Supreme Personality of Godhead and who does not waste time in philosophical speculations attains the highest perfectional stage of liberation. Simply by accepting this truth on faith, one can, without a doubt, attain liberation.

The above statements may baffle us, especially devotees. We already know that Krishna is the Supreme personality of Godhead, we know about Krishna’s transcendental appearance and activities but liberation seems a bit far. But then how much do we even really know Vrajendra Nandan Krishna, Krishna of Vrindavan.

Both the verse and its purport are ‘packed’ and we can unpack then in multiple ways. Today, however let us unpack it from the angle of Krishna’s birth, how and where exactly did Vrajendra Nandan Krishna appeared.

Scriptures say that Svayam Bhagavan, Sri Vrajendra Nandan Krishna, does not take one step out of Vrindavan. Many of us may have read the pastime when Akrura came to invite Krishna and Balaram to Mathura, the two brothers he took with him to Mathura were a little different then whom he assumed accompanied him.

Nanda Mahäräja returned to Våndävana without Kåñëa and Balaräma. He was accompanied only by the cowherd boys and men. It was certainly a very pathetic scene for the gopés, Mother Yaçodä, Çrématé Rädhäräëé and all the other residents of Våndävana. Many devotees have tried to make adjustments to Kåñëa’s being away from Våndävana because, according to expert opinion, Kåñëa, the original Supreme Personality of Godhead, never goes even a step out of Våndävana. He always remains there. The explanation of expert devotees is that Kåñëa was actually not absent from Våndävana; He came back with Nanda Mahäräja as promised.

When Kåñëa was starting for Mathurä on the chariot driven by Akrüra and the gopés were blocking the way, Kåñëa assured them that He was coming back just after finishing His business in Mathurä. He told them not to be overwhelmed and in this way pacified them. But when He failed to come back with Nanda Mahäräja, it appeared that He either cheated them or could not keep His promise. Expert devotees, however, have decided that Kåñëa was neither a cheater nor a breaker of promises. Kåñëa, in His original identity, returned with Nanda Mahäräja and stayed with the gopés and Mother Yaçodä in His bhäva expansion. Kåñëa and Balaräma remained in Mathurä not in Their original forms but in Their expansions as Väsudeva and Saìkarñaëa. The real Kåñëa and Balaräma were in Våndävana in Their bhäva manifestation, whereas in Mathurä They appeared in the prabhava and vaibhava expansions. This is the expert opinion of advanced devotees of Kåñëa. Externally, however, They were absent from Våndävana.

Now a natural question may arise that if Vrajendra Nandan Krishna, the original Supreme Personality of Godhead, never takes even a step out of Vrindavan then how did He take birth in Mathura?

Let us try solve this mystery by seeing it from the eyes of our acharya and the scriptures.

Thereafter, exactly when Vasudeva, being inspired by the Supreme Personality of Godhead, was about to take the newborn child from the delivery room, Yoga-māyā, the Lord’s spiritual energy, took birth as the daughter of the wife of Mahārāja Nanda.

What Srila Prabhupada is disclosing above is simply astonishing! Prabhupada is divulging to us that Krishna appeared simultaneously in two places- as the son of Devaki and as son of mother Yashoda, in Vrindavan.

Let us read the exact commentary of Srila Vishvanath Chakravarty Thakura, which Srila Prabhupada quoted above.

In the Hari Vamsa is says that that in the eighth of her pregnancy Devaki and Yasoda gave birth at the same time to their Children. But here in Bhagavatam it is stated that that Yasoda gave birth after Devaki. How to correlate the two contradictory statements? Exactly when Devaki gave birth to Krishna, Yashoda also gave birth to Krishna. After that, as described in this verse, Yashoda birth to Yagamaya. Yashoda gave birth to two children at different times. This is confirmed in SB 10.4.9, for when Yogamaya falls from the hands of Kamsa, she is called younger sister of Krishna. But when Krishna was born to Yashoda it is not stated that he had four hands. It is understood that He was born from Yashoda with two hands.

Srila Vishvanath Chakravarty Thakura is revealing to us that mother Yashoda gave birth to two kids. A son, Krishna, was born at the very same time when Lord Vishnu appeared as the son of Devaki. (Hence Krishna’s birth is rightly celebrated as Janamashtami everywhere and not on Nandotsava as some devotees tend to suggest.) Second child, as we know, was Yogamaya, Krishna’s ‘younger’ sister.

How can the umbilical cord be still intact if kids were exchanged in the night!

Srimad Bhagavatam itself gives us a hint about this secret while describing how Nanda Maharaj celebrated Krishna’s ‘Jata-Karma’ ceremony, cutting of the umbilical cord connecting the child and placenta.

Śukadeva Gosvāmī said: Nanda Mahārāja was naturally very magnanimous, and when Lord Śrī Kṛṣṇa appeared as his son, he was overwhelmed by jubilation. Therefore, after bathing and purifying himself and dressing himself properly, he invited brāhmaṇas who knew how to recite Vedic mantras. After having these qualified brāhmaṇas recite auspicious Vedic hymns, he arranged to have the Vedic birth ceremony celebrated for his newborn child according to the rules and regulations, and he also arranged for worship of the demigods and forefathers.

Srila Prabhupada writes in the purport of the above verse :

The jāta-karma ceremony can take place when the umbilical cord, connecting the child and the placenta, is cut. However, since Kṛṣṇa was brought by Vasudeva to the house of Nanda Mahārāja, where was the chance for this to happen? In this regard, Viśvanātha Cakravartī Ṭhākura desires to prove with evidence from many śāstras that Kṛṣṇa actually took birth as the son of Yaśodā before the birth of Yoga-māyā, who is therefore described as the Lord’s younger sister.

Because He enjoys many happy pastimes, delighting His dear associates, and even enchanting Himself, Lord Krishna is called “lila-purushottama” (the most playful person).

Because the parental love of Vraja’s king and queen has no equal or superior, Lord Krishna eternally thinks Himself their son.

In ancient times some devotees have said that the Lord appeared in His Vasudeva feature in the home of Maharaja Vasudeva, and at the same time He appeared, along with Yogamaya, in His original form as Shri Krishna in the village of Vraja.

When Maharaja Vasudeva arrived in Vraja, he entered the maternity room, saw (Yasoda’s, daughter and, taking her with him, returned to Mathura. The Vasudeva expansion (Maharaja Vasudeva carried with him, then merged in the body of Shri Krishna.

Because this pastime is very confidential, it was not related in the Shrimad-Bhagavatam. Nevertheless, Sukadeva Gosvami and other great devotees have indirectly described it in some of their writings.

Srila Rupa Gosvami then quotes below four verses from Srimad Bhagavatam which specifically describe Krishna as son of Nanda Maharaj.

“Nanda Maharaja was naturally very magnanimous, and when Lord Shri Krishna appeared as his son, he was overwhelmed by jubilation.”

“Nanda Maharaja was very liberal and simple. He immediately took his son Krishna on his lap as if Krishna had returned from death.”

“The Supreme Personality of Godhead, Krishna, the son of Mother Yasoda, is accessible to devotees engaged in spontaneous loving service, but He is not as easily accessible to mental speculators, to those striving for self-realization by severe austerities and penances, or to those who consider the body the same as the self.”

“Let me offer my respectful obeisances unto the son of Maharaja Nanda, who is standing before me with conchshell earrings and peacock feather on His head. His face is beautiful» He is wearing a helmet, garlanded with forest flowers, and He stands with a morsel of food in His hand. He is decorated with cane, flute, and a bugle made of buffalo horn. He stands before me with small lotus feet.”

The above verse has also been quoted in Caitanya Caritamrta, it was spoken by Caitanya Mahaprabhu to … who else…. Srila Rupa Goswami!

Lord Kṛṣṇa, the son of the King of Vraja, is the Supreme Lord. He eternally enjoys transcendental pastimes in His eternal abode, Goloka, which includes Vrajadhāma.

I hope we got a little taste of sweet undercurrents flowing via, seemingly, straight verses of Bhagavad Gita, and also Srimad Bhagavatam, if we simply serve these two scriptures by studying them regularly, then, by the mercy and potency of Srila Prabhupada, many intricate aspects of Absolute Truth, Sri Vrajendra Nandan Krishna, can manifest in our heart.

He who accepts this truth on the strength of the authority of the Vedas and of the Supreme Personality of Godhead and who does not waste time in philosophical speculations attains the highest perfectional stage of liberation. Simply by accepting this truth on faith, one can, without a doubt, attain liberation. The Vedic version tat tvam asi is actually applied in this case. Anyone who understands Lord Kṛṣṇa to be the Supreme, or who says unto the Lord, “You are the same Supreme Brahman, the Personality of Godhead,” is certainly liberated instantly, and consequently his entrance into the transcendental association of the Lord is guaranteed.

The Supreme Personality of Godhead, Lord Krishna, the son of Nanda Maharaja, is worshipped along with His transcendental abode Vrndavana. The most pleasing form of worship for the Lord is that which was performed by the gopis of Vrndavana. Srimad Bhagavatam is the spotless authority on everything and pure love of Godhead is the ultimate goal of life for all men. These statements, for which we have the highest regard, are the opinion of Sri Caitanya Mahaprabhu.