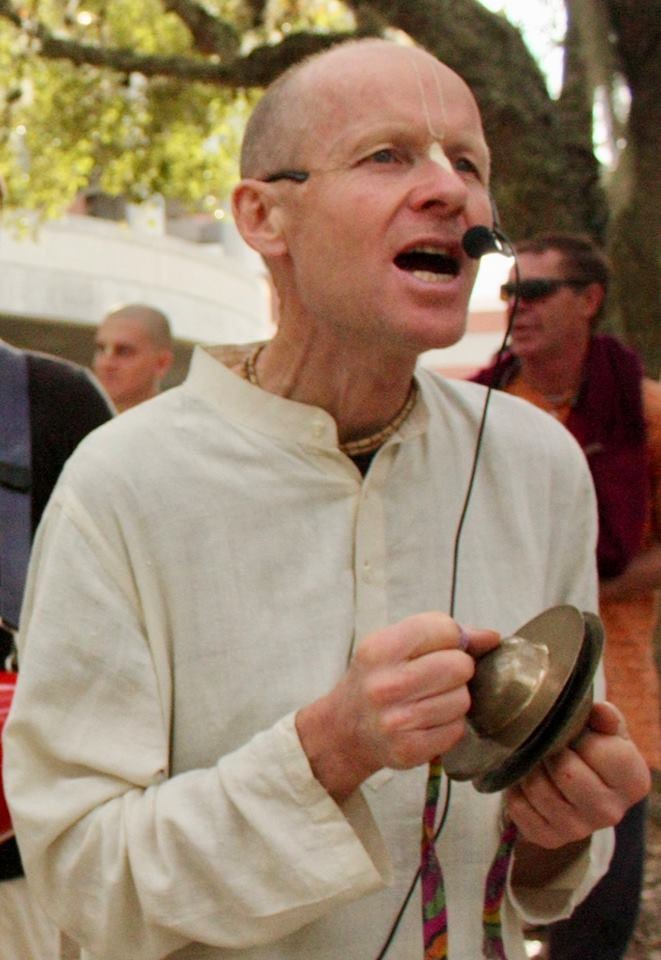 January 5, 2019: we just learned of the passing of our dear Godbrother, Kaliyaphani dasa Prabhu. I would like to give a little eulogy based on my association with him. I first met Kaliyaphani Prabhu at the Bhaktivedanta Manor in London, October, 1976—I had just arrived from Los Angeles. He was a brahmacari in his early twenties, doing full time traveling sankirtana book distribution very enthusiastically. His younger brother was also a devotee and an excellent book distributor named Satyavak dasa brahmacari, he, however left this world a few years later. Kaliyaphani was easily likeable, good-looking, agile, strong, healthy, and very friendly. He spoke with a refined English accent, indicating some kind of an educational, cultural and respectable family background. He was like a soldier in a sense that he took his service very seriously, and he considered himself sold out to Krsna. When I met him he was already initiated having accepted Srila Prabhupada as his life and soul. Immensely philosophical, he considered his life was now in Prabhupada’s care and he would do whatever he was asked to do by the representatives of Srila Prabhupada.

He was a good kirtan leader and dancer. Sometimes in the big kirtans he would delight everyone by interspersing somersaults and flips into his dancing. He was expert in that. He had previously done some professional work as a stuntman…jumping off buildings and things.

He was very humble. His humility made you believe that he was actually your servant. Somehow or other, because he was so convinced that he was the servant of the devotees, that he convinced you and so it was easy to become proud in his association because he would always defer to the other devotee. And not just only senior devotees, certainly he was very respectable to senior devotees but even junior devotees, he was so respectful and willing to serve and make them feel as though they were very advanced and important.

He was a hard worker. Over the years he sometimes served as temple commander and he was very good at that because he was so eager to do any type of service. There were no taboos for him; he would do whatever it took.

He was respectful to all; he didn’t have any bias against anyone or favor to anyone. He was just respectful to everyone. He was always jolly. I cannot remember every being with Kaliyaphani when he was not jolly and not happy. He was sometimes self-defacing, considering himself very unimportant and not very advanced, but still he was always a pleasure to be around, never moody.

He was learned in Srila Prabhupada’s books, he loved to study, and he was very astute in understanding the philosophy and would be very happy to discuss it for hours. He loved studying with other devotees, reading together. He was good speaker and preacher and gave wonderful classes. When living in a temple, he would attend without fail, morning and evening temple programs and harinamas.

He was ever-ready for service. I think sometimes we used to call him that, “Kaliyaphani is the action man.” He was well-liked by all. He was daring. One time at Caitanya College in England, there was a dacoit who did something wrong, I don’t remember what he did, but it was understood that he did something illegal and now he was fleeing the property running. Although he had quite a head start, Kaliyaphani ran after him and apprehended him and brought him back and then turned him over to the legal authorities. That’s the type of person he was.

He was a great actor aside from his other abilities. He played the part of the British governor in the Abhay Charan series. You’ll delight in seeing it because I think he really plays the part well. He would like to be in plays. His wit was very sharp, he had a wonderful sense of humor and was not a fault finder. He lived austerely with very few possessions if any, he was quite simple in that regard; he didn’t have many possessions, akincana, and he loved devotional service.

All in all, Kaliyaphani is a great Godbrother to have. I am honored to have shared so much association with him. It was always an inspiration to be with him, to experience his joy and happiness in serving Prabhupada and Krsna. He certainly uplifted wherever he was and he will be greatly missed by me and I’m sure many devotees who knew him. Knowing that he was on the planet somewhere doing his service gave a sense of support and reassurance. Now that he has departed we can appreciate what we had in his association. He never took any high positions; he never wanted any honor or respect from others. He didn’t seem to even like respect for himself. But we’re thankful to him for all he gave and pray that he has reached the highest perfection.