How Lord Krishna is the Source of all Avatars 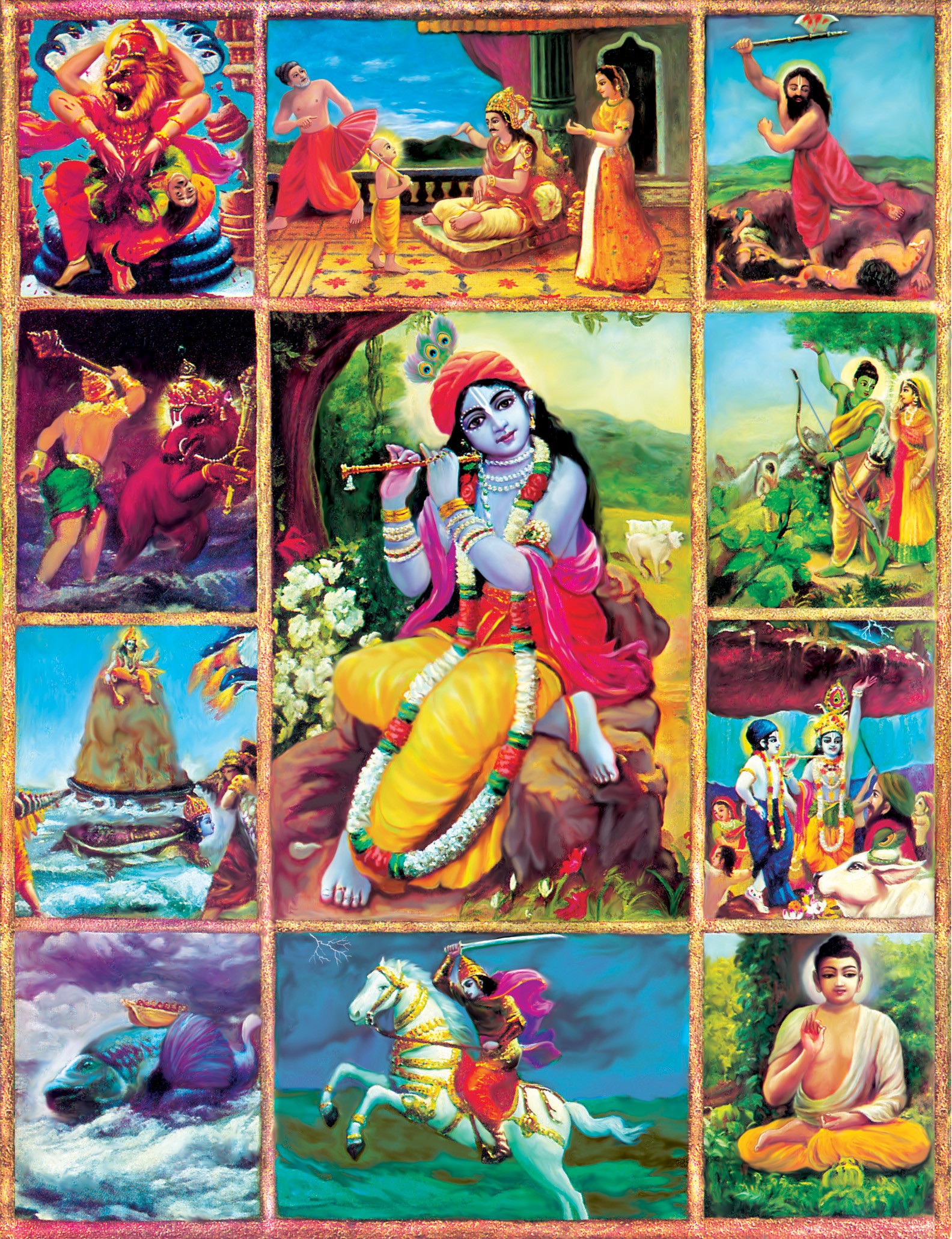 In spite of the fact that everything comes from the Supreme Being, He is still aloof from it all. He does not disengage Himself from His eternal pleasure pastimes with His devotees in the spiritual realm. So, in the process of creating the material worlds, the Supreme expands Himself into various forms, which are His plenary parts. Krishna is the primeval Lord, the original Personality of Godhead, so He can expand Himself into unlimited forms with all potencies. They are no different from Him, but may exhibit differences in form.

He first expands Himself into Baladeva, or Balarama, who is considered Krishna’s second body and brother. Balarama assists in Lord Krishna’s innumerable spiritual pastimes in both the spiritual and material realms.

Lord Balarama especially assists Lord Krishna in the creation of the material worlds. After Balarama has expanded Himself into Lord Maha-Sankarshana, He expands Himself into four different forms, including: 1) Karanadakashayi Vishnu [Maha-Vishnu], 2) Garbhodakashayi Vishnu [the expansion in each universe], 3) Ksirodakashayi Vishnu [the Supersoul in each individual], and 4) Sesha, also called Seshanaga. These first four plenary portions assist in the material cosmic manifestation. Sesha is Balarama’s form who assists in the Lord’s personal service. He is also called Ananta, meaning unlimited, because He assists the Lord in His unlimited variety of pastimes. 2

To explain more clearly, all expansions of the Lord begin with Sri Krishna. For His pastimes in one of the highest levels of the spiritual realm, called Dvaraka, Sri Krishna expands Himself into Balarama, who then expands Himself into Pradyumna and Aniruddha. These four expand into a second quadruple which is present in the unlimited Vaikuntha planets of the spiritual sky. The second quadruple is known as Vasudeva, Sankarshana, Pradyumna and Aniruddha. They are changeless, transcendental expansions of the Supreme Lord, Krishna. In this second quadruple, Vasudeva is an expansion of Krishna, and Sankarshana is a representation of Balarama.

In the Vaikuntha sky there is the pure, spiritual creative energy called Shuddha-sattva that sustains all of the spiritual planets with the full opulences of knowledge, wealth, power, beauty, etc., all of which pervade the entire spiritual kingdom and are fully enjoyed by the residents there. This energy is but a display of the creative potencies of Balarama, Maha-Sankarshana. It is also this Sankarshana who is the original cause of the Causal Ocean where Karanodakashayi Vishnu (Maha-Vishnu) sleeps, while breathing out the seeds of innumerable universes. When the cosmic creation is annihilated, all of the materially conditioned, although indestructible, living entities merge back into the body of Maha-Vishnu where they rest until the time of the next creation. So, Balarama as Sankarshana is the origin of Maha-Vishnu, from whom originates all of the potencies of the material manifestation. 3

To begin explaining the purpose and function of these expansions, the Srimad-Bhagavatam (2.6.42) describes that, “Maha-Vishnu (Karanadakashayi Vishnu) is the first incarnation of the Supreme Lord in the process of creating the material worlds. He is the master of eternal time, space, cause and effects, mind, elements, material ego, the modes of nature, senses, the universal form of the Lord (Garbhodakashayi Vishnu) and the sum total of all living beings, both moving and nonmoving.”

Then Maha-Vishnu lies down in the Viraja River, which is the border between the spiritual and material worlds. 5

Lord Maha-Vishnu is the source of thousands of avataras in His thousands and thousands of subjective portions. He is the creator of countless individual souls. He is also known by the name of Narayana, meaning the shelter of all the individual jiva souls. From Him springs forth the vast expanse of water known as the spiritual Causal Ocean. Maha-Vishnu then reclines in the waters of the Causal Ocean in a state of divine sleep, called yoga-nidra. Thus, it is said that the universal creation is but the dream of Maha-Vishnu. 6

Since the waters of the Causal Ocean, known as the Karana Ocean, come from the body of Maha-Vishnu, it is completely spiritual. The sacred Ganges is but a drop from that ocean, which can purify the fallen souls. 7

Lord Balarama also expands into the great serpent known as Ananta, or Seshanaga. He reposes on the Causal Ocean and serves as the couch upon whom Lord Maha-Vishnu reclines. 8

That Ananta-Sesha is the devotee incarnation of God who knows nothing but service to Lord Krishna. With His thousands of mouths He always sings the endless glories of Lord Krishna. He also expands Himself to serve as Lord Krishna’s paraphernalia, including such items as the umbrella, slippers, bedding, pillow, garments, resting chair, residence, sacred gayatri thread, and throne in the pastimes of Lord Krishna. Thus, He has attained and exhibits the ultimate end of servitude to Lord Krishna. 9

At the time of creation, after the Supreme has been sleeping for some time, the first emanation from the breathing of Lord Maha-Vishnu are the personified Vedas who serve Him by waking Him from His mystic sleep. They begin to enthusiastically sing His glories, pastimes, and praises, just as a King is awaken in the morning by poets who recite his heroic deeds. 10 This shows the eternal nature of the Vedic literature. They are not merely the writings of men, but they are spiritual vibrations that exist before and after the material creation, and which emanate from the Supreme Lord.

Simply by the glance of Maha-Vishnu consciousness is created, which is known as the mahat-tattva. The predominating Deity of the mahat-tattva is Lord Vasudeva, another expansion of Lord Krishna. This explains how the material energy is like the mother of the living beings while the Lord is the Supreme Father of everyone. Just as a woman cannot give birth without the contact of a man, or at least his seed, so material nature cannot create without the contact of the Supreme Being.

So, first the total material energy is manifest, and from this arise the three types of egotism, which are the original sources of all the demigods [the minor controlling deities], the senses, and material elements. By combining the different elements, the Supreme Lord creates all of the unlimited universes. Once the material elements have been manifested, and the full potential for creating the universes has been established, the innumerable universes begin to emanate from the pores of the body of Maha-Vishnu, and from His exhalations. They appear just like atomic particles that float in sunshine and pass through a screen. When Maha-Vishnu inhales at the time of the universal annihilation, they return to His body. In this way, Maha-Vishnu is the Supersoul of all the universes. 13

Brahma, the demigods, and each universe remain alive for the duration of one of His exhalations. 14 However, there is no limit to the exhalations of Maha-Vishnu. 15

Once all of the universes are created, which are unlimited, Maha-Vishnu expands Himself into unlimited forms and enters each universe as Garbhodakashayi Vishnu. Once He is in each universe, He sees that there is no place to reside. Then, after some consideration, He fills half of the universe with water from His own perspiration. He then lays down on the water, again supported by the bed of Seshanaga. 16

Garbhodakashayi Vishnu, who is known within the universe as Hiranyagarbha and Antaryami, the Supersoul, is glorified in the Vedic hymns. He is the master of each and every universe and shelter of the external or material energy. However, being transcendental, He is completely beyond the touch of the external energy.

Next is the third expansion of Vishnu, called Ksirodakashayi Vishnu, who is the incarnation of the quality of goodness. He is the universal form of the Lord and expands Himself as the Supersol within every living entity. He is known as Ksirodakashayi Vishnu because He lies on the ocean of milk on the island of Svetadvipa. These are the three expansions of Lord Vishnu who oversee and make the creation of the material world possible. 17

In this way, we can see how all of the expansions of the Lord, and also all of His energies that are manifested to bring forth the cosmic creation, all originate from Lord Krishna. Therefore, the reason why Lord Krishna is considered the ninth incarnation is only because this is the order in which He displays His avatars before He displays His own pastimes. Basically, if we can further understand this description, everything is but a pastime of the Lord.

A few additional verses that clarify this topic include the 3rd chapter of the 1st Canto of Srimad-Bhagavatam which describes the principle incarnations of the Supreme Lord. Having done that, verse 28 says:

“Krishna who is known as Govinda is the Supreme Godhead. He has an eternal blissful spiritual body. He is the origin of all. He has no other origin and He is the prime cause of all causes.”

In this way, the Vedic literature agrees that Krishna is the source of Brahma, Shiva and all other demigods. In the Atharva Veda (Gopala-tapani Upanishad 1.24) it is said, yo brahmanam vidadhati purvam yo vai vedamsh cha gapayati sma krishnah: “It was Krishna who in the beginning instructed Brahma in Vedic knowledge and who disseminated Vedic knowledge in the past.”

This Narayana is an expansion of Krishna as previously explained.

It is further said in the Narayana Upanishad 4, brahmanyo devaki-putrah: “The son of Devaki, Krishna, is the Supreme Personality.”

In the Moksha-dharma Sri Krishna Himself says,

Lord Brahma continues to pray and explains in his Brahma Samhita (5.46) how the potency in Krishna’s expansions spreads from one form to another:

“The light of one candle being communicated to other candles, although it burns separately in them, is the same in its quality. I adore the primeval Lord Govinda who exhibits Himself equally in the same mobile manner in His various manifestations.”

Thus, the Vedic knowledge clearly accepts Sri Krishna (Govinda) as the original independent causeless fountainhead of all of His various personality manifestations known as the various Vishnu avataras (forms/personalities).

What profit in all our labors?