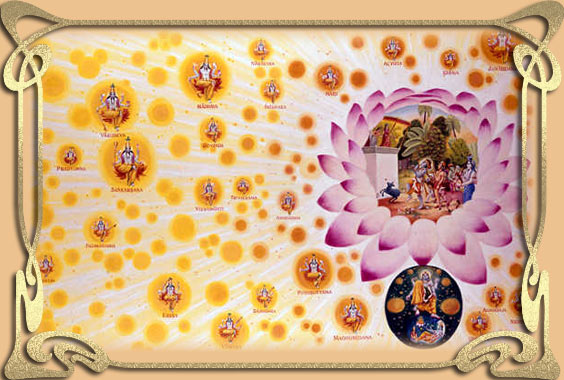 Was there ever a time when we underestimated someone? We judged a book by its cover? And rained down our prejudices from on high, suspecting intellectual inferiority or a flawed disposition, unworthy of our dignified consideration; then the person concerned turns out to be eminently more qualified than we thought.

Such behavior not only causes fatal friction worldwide, but can severely hinder our spiritual development if we dare to do likewise to vaisnavas who care not to advertise their exalted nature.

It is very easy to get stuck in the grind of mechanical devotional service, being imbued with certain inflexible standards, to which we protest blasphemous foul, harbor envious resentment or show joyful entreaty towards an unknown quantity who may seemingly defy convention, but has received the full mercy of Sri Sri Guru and Gauranga.

When the omniscient Lord, Sri Chaitanya Mahaprabhu composed His famous trnad api … verse, it was not just a fleeting gesture or necessarily a product of heightened ecstasy, He was fully mindful of the fact that His sankirtana mission would spread all over the world. He instructed devotees to string this verse around their arm or neck to serve as a constant reminder of their humble state of mind. As Kali-yuga progresses, this will be the optimum requirement for any candidate wishing to take up His mission. In the modern era, it would clothe the efforts of Srila Prabhupada and his followers.

History is replete with examples of the Supreme Lord defying the norms of collective beliefs and traditions. As He is independent in every way, His latitude is bound to the love of His pure devotees, certain of whom also behaved in ways contrary to expectations, sometimes inviting the wrath of ignorant persons. In other ways they carry out the Lords bidding against all mathematical odds. Against this background of perceived normality, a most unlikely individual may be favored by the Lord in the most opposite way.

In the Srimad Bhagavatam the story of Jada Bharata tells of his extreme tolerance in the face of misunderstanding; a condition mundane minds will attribute to flagrant self – abasement. Though he was a fully competent individual, highly advanced in spiritual understanding, he acted as a dysfunctional mute, careful not to repeat the mistakes of his previous life. Being subjected to physical humiliation and abuse his real glory shone forth from, of all places, underneath a Kings palanquin which he toiled to carry, where he, as a lowly slave preached the highest truth unto King Rahugana.

Elsewhere we find Sukadeva Goswami who was so other worldly he went about naked, inviting all manner of jokes and invectives. But this beautiful oddity, a sixteen year old vagabond was inspired to go and recite the Srimad Bhagavatam to Maharaja Pariksit, in the presence of the great sages, mystics and philosophers who hailed from all parts of the universe. Furthermore, his spiritual master Srila Vyasadeva and his grand spiritual master Srila Narada Muni were also present.

During Lord Chaitanya’s presence on Earth, two brothers were ostracized by the brahmana community for adopting Islamic ways and identity. They were nonetheless accepted as direct disciples by the merciful Lord who did the unthinkable in rattling the nerves of the custodians of the caste system, who sometimes worked in cahoots with the Muslim occupying force. For Srila Rupa Goswami and Srila Sanatana Goswami to switch from Hindu to Islam to Vaisnavism was radical to say the least, Yet we are called Rupanugas in honor of his special standing in relation to Sri Sri Radha Govinda.

Srila Raghunatha Dasa Goswami was born into fabulous wealth and aristocracy, and Sri Chaitanya Mahaprabhu made him the acarya for renunciation. Srila Hari Dasa Thakhur was actually born into a Yavana [Muslim] family. For him to desert Islam is considered the utmost of heretical evils, and to convert to Vaisnavism was a little trite too much for the caste conscious, leaving him in a rejected state of limbo. Of course, the loving Lord not only accepted him, but nominated him as acarya for chanting the Holy Names.

See how the principle of opposites is working from an absolute plane, aloof from the three modes of material nature.

Srila Ramananda Raya was according to external vision a pounds and shillings Sudra, but so highly learned was he in Rasa esotericism, the Lord acknowledged him as the pre-eminent guardian of this theology.

Srila Bhaktisiddanta Sarasvati Thakhur, the acclaimed scholar, astronomer, orator and much more, accepted Srila Gaura Kishora Dasa Babaji as his Guru, who was to the mundane eye, an eccentric, illiterate and homeless ascetic.

Our Srila Prabhupada also defied the gravity of grounded institutionalism. Among his God brothers he was deemed an average devotee with average abilities. Many of them were aware of his Guru’s order to spread Krsna consciousness around the world. Conventional wisdom taught, so most thought, that the world pertained to greater India at most. As Srila Prabhupada got older approaching the age of seventy, he definitely was the least likely person to carry out this deed. But there is something mystical and powerful about the order of the spiritual master which guarantees the Lord’s protection and enables one to do literally the impossible.

Against all good sound well meaning advice, as befitting an old man with meager means, he left the shores of India. One could have been forgiven if he were to say this was a foolhardy exercise. But it was uniquely unlikely,

This is what Lord Chaitanya foresaw. He has His agents of the universal order move the chess pieces of world affairs to align with Srila Prabhupada’s arrival in America, and the trinad api…. principle is going to be tested more than ever.

The establishment of Iskcon, Lord Chaitanya’s sankirtana mission, was the vital plunge of the plough of Sri Baladeva who with his Sandhini potency becomes the mainstay of Srila Prabhupada’s creation. At first glance, the exuberant devotees were seen as part of a temporary phenomenon, a strange but exotic way to escape the heartless grinding machination of a competition driven industrialized monstrosity. After a short time, when Srila Prabhupada took his disciples to India he knew that the straw hut of existing parameters had been bulldozed by the charge of his ‘dancing white elephants’. If even to find one albino elephant is rare, then many of them seen together and dancing cleverly too, is an astonishing find; most unlikely. And yes, his fellow countrymen took notice, his God brothers too, one of whom was moved to call Srila Prabhupada a Satyavesa Avatar. So impossible it was.

Here we are today, many of us wondering why the chess pieces of world affairs are moving ever so slowly towards anything which resembles a check-mate of world acceptance. There is much to do, because to all those hundreds of millions of people who are steeped in intellectual cynicism borne of Western thought systems, those who claim custodianship of Hindu orthodoxy with its plethora of branches, and those who are generally agnostic, atheistic and materially progressive, we, by and large are still viewed as dysfunctional dropouts, strangely dressed vagabonds and misinformed eccentrics all rolled into one, like a Cinderella trying very hard to please with credible alternatives to the status quo, but are deemed too lightweight to take on the horrid step sisters of the aimless movers and shakers of the world. As such, the pill of trnad api …. Inflates to the size of a pumpkin. Who can swallow a pumpkin sized tablet?

The challenge to make Iskcon acceptable is the preliminary clearing of the land, to cut down the dense foliage of misconception and suspicion, thereby creating an area ready for ploughing the seeds of eligibility. By exhibiting genuine amanina manadena …. Towards each other, even to unlikely opposite nonconformists, we can induce humility in others. Just as the pumpkin transformed into an impressive stagecoach which took Cinderella to the ball, the magic of trnad api …. By which we can obtain Sri Guru’s grace, Sri Nityananda’s grace who as Sri Balarama will be pleased to transform Iskcon into a dazzling Vaikuntha airplane. Our ploughing will then become an easier affair.

Within this strange world where the miseries of birth, death, old age and disease are certain certainties, another certainty is that from now into the future, more individuals will be inspired by the Lord, and appear out of obscurity, possessed of such influence and moral clout as to continue the Lord’s inconceivable tradition of being a total exception to the rule. So expect the unexpected to happen; any time.

Akrura Ghat @ Vrindavan 10/03/2017 (Album with photos) Deena...
How Your Beliefs Affect Your Commitments

Krsnaaaa Give Me a Break!!!