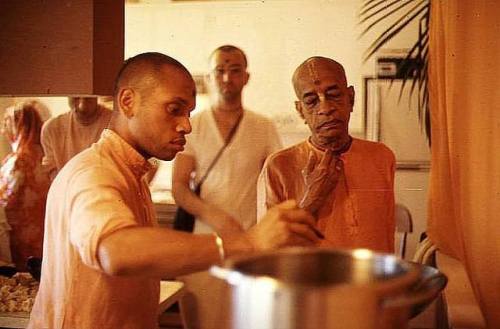 Sudama das: It was a very hot day in Oregon, in August of 1968. I awoke rather early, which for me and the people I was around at that time was somewhat unusual. Usually, coming down from last night’s drugs, everyone would rise sometime afternoon. On that day, as on every day, I awoke with a feeling of separation, a searching for, a longing for…
All my friends at that time were also into this feeling of separation, searching for something and someone to say what we all wanted to hear, that would guide us out of material existence, the Maya that we were all living under. Someone to answer the questions in our minds. We were all, I think unhappy; yet we would smile and pretend to one another that everything would work out, that the world would be all right very soon. We didn’t know that there is no happiness in material existence, or that drugs and sex are only temporary, or that our search for complete sense gratification on the material plane would run us, like everyone, further and deeper into the pit of mundane existence. Instead of progressing out of the concept of the body, we all thought that putting drugs inside the body would be the answer to our search. The unfortunate thing is that most of my friends still think and feel that way.
On that early-rising day, I started out for a walk through the woods, mostly to get away from all the nonsense, and also to read. Most of the books that had held my interest during the past three or four years had dealt with Eastern thought, astrology, occultism, Zen, Tibetan and Hatha Yoga, etc. But most of those books that I had come across I could not finish. They were all lacking something.
A friend of mine, who was living on the farm where I was a guest at the time, had his school bus—made into his home—parked nearby in the woods. He had a small library there, and I set out for the bus knowing that it would be deserted just then. I entered the bus and went straight for the bookshelf. Every book on the shelf I had seen before, except for three brown hardbacks entitled “Srimad Bhagwatam,” volumes 1, 2, and 3, by A. C. Bhaktivedanta Swami. There was dust covering the three volumes. I picked them up and dusted them off and started reading the very first page that had print on it:
“All Glory to Sri Guru and Gouranga.”
The language hypnotized me, to say the least, and I couldn’t put the book down. After about two days of reading, I began to feel out of place around my friends. My only thoughts were of those books and that author. I knew that it was time for me to leave Oregon. I started making plans to go to India and search out this Swami Bhaktivedanta.
The day of my departure from Oregon, I asked my friend for the volumes, which he was not reading. At first, I was afraid he would refuse me the books, but I thought that if I was meant to read them, they would be mine. I had grown very attached to them. His answer to me was yes: “The books are yours now, take them with you.” I was overjoyed.
I took a plane to Los Angeles to see my family. I told them of my plans to go to India and seek out the Swami. They were all for my happiness and my journey and gave me as much help as possible. I was to leave in a month. Then I went to San Francisco to make arrangements for my trip.
While reading the first volume I had seen, “Radha Krishna Temple, Vrindaban U. P. ” as the publisher’s address. Now I remembered that there was a Radha Krishna temple in San Francisco, and so I walked to the temple and saw a devotee by the name of Sachisuta Das Brahmachary. I asked him when services were held, and he told me that they had Kirtan in the mornings at 7 a.m., and Mondays, Wednesdays and Fridays at 7 p.m. I returned the following Monday morning, to find out with surprise that the same Swami Bhaktivedanta I was planning to go and find would be arriving in about two weeks.
During those next weeks, the temple became my home, and all the devotees I felt were my true friends. I surrendered myself to Krishna and to Swamiji and was welcomed by all the devotees. The Sunday of Swamiji’s arrival came, and when I saw my Spiritual Master, tears came flowing. My tears of ecstasy have not yet stopped, nor will they ever.

Gaur Purnima at ISKCON Gaya (Album of photos and videos)

Railway station in Jharkhand for a tie-up with ISKCON