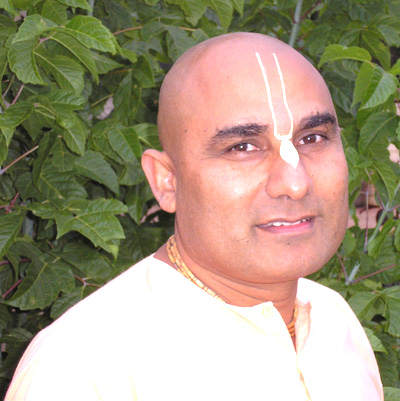 He has made incredible contributions as a humble servant. One really outstanding achievement is that he distributed more that 60 000 of Srila Prabhupada’s books. I recall when I joined as a full time devotees and was sent out to do sankirtan. After my first day out on the street I was asked my score before the Srimad Bhagavatam class. I did 8 books for the entire day. Then the score of Brhat-mrdanga Prabhu was mentioned and it was many sets of Srimad Bhagavatams!!

After inundating schools with thousands of Srila Prabhupada’s books, HH Giriraj Swami asked Brhat-mrdanga Prabhu to structure a program were people study these books. Brhat-mrdanga Prabhu then went to India to study his Bhakti Sastri at VIHE. He returned to South Africa and founded the Bhaktivedanta College of Education and Culture in July 1991 in Durban, South Africa. The college has since served as a forum to discuss and relish the translations and purports of His Divine Grace A.C. Bhaktivedanta Swami Prabhupada.

After establishing the Bhaktivedanta College of Education and Culture, Brhat-mrdanga Prabhu trained many teachers who now continue to teach these courses based on Srila Prabhupada’s books. He then travelled and still travels abroad to Brampton, Houston, Inisrath, London, Mauritius, Nairobi, Phillippines, San Diego, Toronto, Vancouver and other places and teaches these structured courses. He has also formed a section of the college with a special children’s syllabus.

Since the inception of the BCEC in 1991 to date, and under the able guidance and inspiration of HG Brhat-mrdanga Prabhu, 13 470 students internationally have graduated in various courses based only on the teachings of His Divine Grace A.C Bhaktivedanta Swami Prabhupada.

THE BHAKTIVEDANTA COLLEGE OF EDUCATION AND CULTURE ( BCEC ) “If one is trying to render devotional service to Lord Krishna without a basis in transcendental knowledge, one will find that one’s service will tend to be more on the sentimental platform. Someone on that level will find it difficult dealing with many situations that arise in Krishna consciousness, and will fall down easily. However the Lord says in Bhagavad-gita, ‘In this world, there is nothing so sublime and pure as transcendental knowledge. Such knowledge is the mature fruit of all mysticism. And one who has become accomplished in the practice of devotional service enjoys this knowledge within himself in due course of time.’ B/g
4.38. The Bhaktivedanta College of Education and Culture is one of the most important branches of ISKCON, as it is providing all the devotees with an opportunity to become firmly fixed in spiritual knowledge. Please continue to take advantage of this facility.”
-H.H Bhakti Caitanya Swami

“Srila Prabhupada established ISKCON “to systematically propagate spiritual knowledge to society at large and to educate all the people in the techniques of spiritual life, and to achieve real unity and peace in the world”. Bhaktivedanta College of Education and Culture has made this noble aim of ISKCON its central theme. ‘Bhakti’ means devotion and ‘Vedanta’ means the conclusive truth. Unlike speculative knowledge without devotion, knowledge fortified with devotion is the means to understand the Absolute Truth.” H.H Tamal Krishna Gosvami

“The Bhaktivedanta College programme in South Africa is the most sophisticated spiritual institution in the world and is creating a tremendous revolution in the consciousness. The programme gives students vigorous and scrutinizing techniques on how to appreciate finer aspects of the philosophy, and apply it to their lives. The students are not only getting a chance to hear a lecture, but to also associate in a vaisnava cultural environment. Bhaktivedanta College students and teachers will definitely be the leaders in Krishna consciousness communities around the world.” H.H Bhakti Tirtha Swami

For further information here is the link: